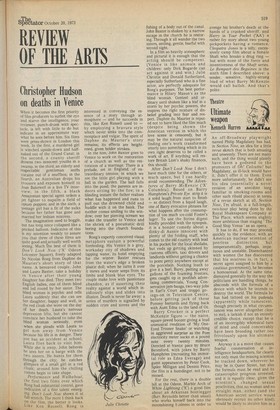 Christopher Hudson on deaths in Venice

When it becomes the first priority of film producers to surfeit the eye and starve the intelligence, your reviewer, punch-drunk with spec tacle, is left with little to do but indicate in an approximate way what he sees before him. Six films were press-shown in London this week. In the first, a murdered girl is winched upside-down and halfnaked out of the Grand Canal; in the second, a county sheriff drowns two innocent youths in a swamp; in the third, an elderly and respectable gentleman sniffs cocaine out of a snuffbox; in the fourth, an Australian drops his trousers and exposes himself to Joan Bakewell in a live TV interview; in the fifth, a black Amazonian special agent orders a jet fighter to napalm a field of opium poppies; and in the sixth, a teenage girl has a fit of the sulks because her father has gone and married her lesbian mistress.

The imagination used to boggle, but has long since collapsed like a pricked balloon. Indicative of this is my intention weakly to assure You that three of these films are quite good and actually well worth seeing. Much The best of them is Don't Look Now ('X' Odeon Leicester Square), freely adapted by Nicolas Roeg from Daphne du Maurier's short story of that name. A bereaved couple, John and Laura Baxter, take a holiday in Venice after their young daughter has died. They meet two English ladies, one of them blind and led round by her sister. The blind woman is psychic and tells Laura suddenly that she can see her daughter, happy and well, in the red cloak she wore on the day of her death. Laura's nervous depression lifts, but she cannot convince her husband to take the blind woman seriously, even when she pleads with Laura to get him away from Venice because his life is in danger. Their son has an accident at school; Laura flies back to visit him. While she is away, John believes he sees her on a barge with the two sisters. He hunts for them through the city; he catches glimpses of a small girl in a red cloak; around him the chilling visions begin to take shape. Performance and Walkabout, the first two films over which

indication of a fine talent emerging. Don't Look Now shows it at

full stretch. The more I think back on the film, the better it looks. Like Ken Russell, Roeg is interested in conveying the essence of a story through atmosphere — and he succeeds in this, like Ken Russell used to — by employing a bravura style which never sinks into the commonplace and vulgar. The spirit of Daphne du Maurier's story remains; its effects are heightened, given bolder strokes.

In the film, John Baxter goes to Venice to work on the restoration of a church as well as the restoration of a marriage. There is a prelude, set in England, of extraordinary tension, in which we see the little girl playing with a ball in the garden. The ball falls into the pond; the parents are indoors sitting by the fire; in a blinding instant the father realises what has happened and runs to pull out the drowned child and huddle with it on the bank. The mother comes smiling to the window; over her piercing scream we make the transfer to Venice and the shriek of a pneumatic drill boring into the church foundations.

Roeg's expertly conceived visual metaphors sustain a powerful foreboding. His Venice is a grey, workaday city of shadows and lapping water, its hotel emptying for the winter. Baxter rescues from the water's edge a broken plastic doll; when he turns it over it mews and water seeps from its limbs and blank blue eyes. The couple make love with passionate abandon, as if asserting their reality against a world which insidiously slips and slides into illusion. Death is never far away: a series of murders is signalled by sudden cries and sirens and the fishing of a body out of the canal. John Baxter is shaken by a narrow escape in the church he is restoring. Through it all wander the two sisters, smiling, gentle, fearful with second sight.

In a film so heavily atmospheric and pictural it is enough that the acting should be competent. (Venice is like animals and children: only Dirk Bogarde can act against it and win.) Julie Christie and Donald Sutherland, especially Sutherland who is a fine actor, are perfectly adequate for Roeg's purposes. The best performance is Hilary Mason's as the blind woman. Genteel and ordinary until shaken like a leaf in a storm by her psychic powers, she inspires the right mixture of disbelief grading into fear and respect. Daphne du Maurier is reputed not to have liked the film much (despite being shown the American version in which the love scene is censored); but it may be the natural suspicion of finding one's work transformed utterly into something which in its own right deserves to be called a work of art. If anything will restore British Lion's shaky finances, this should.

After Don't Look Now I don't have much time for the others, or much space, but I can hardly avoid recommending The Adventures of Barry McKenzie ('X' Columbia). Based on Barry Humphries's Private Eye strip it is a solid laugh from start to finish — as distinct from a liquid laugh, one of Barry evocative phrases for what happens after the consumption of too much ice-cold Foster's lager. To use the Strine digest kindly provided with the synopsis, it is a bonzer comedy about a dinky-di Aussie innocent with

plenty of' the folding stuff, who comes to the old country with lead in his pocket for the local sheilahs, but ends up getting skinned by customs officers, taxi drivers and landlords without getting a chance to point percy anywhere except at the porcelain. Nothing loath to give it a burl. Barry, putting away gallons of the foaming frosties, gets caught up in poofdah adver tising commercials, Young Conservative jam-bangs, two-way jobs in Earl's Court and troppo go ings-on in Television Centre, before getting jack of these Pommy bastards and flying back with Aunt Edna to the land of Oz. Barry Crocker is a perfect McKenzie figure — the naive, square-jawed boozer giving a loud unmusical rendition of 'My OneEyed Trouser Snake' or watching in aggrieved surprise as the Porn electricity meter sucks in a pound note every twenty minutes.

Directed at frantic pace by Bruce Beresford, with jokes by Barry Humphries (recreating his immor tal role as Edna Everage) and guest appearances by Peter Cook, Spike Milligan and Dennis Price, the film is a humdinger, not to be missed.

For the rest, there is a double bill at the Odeon, Marble Arch of

avenge his brother's death at the hands of a crooked sheriff, and Harry in Your Pocket ('AA') a rather fey story about two young pickpockets having a romance. Cleopatra Jones is a silly, excessively camp film about a female Shaft who breaks a drug ring — but with none of the force and inventiveness of the Shaft series. Le Rempart des Beguines is the sixth film I described above: a tender, sensitive, highly-strung load of what Barry McKenzie would call bullsh. And that's polite.