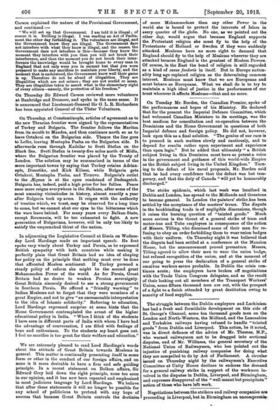 Page 2, 20 September 1913 — We are extremely pleased to read Lord Hardinge's words about
Close

We are extremely pleased to read Lord Hardinge's words about

the attitude of Great Britain towards Moslems in general. This matter is continually presenting itself in some form or other in the conduct of our foreign affairs, and on none is it more desirable to have a firm and safe guiding principle. In a recent statement on Balkan affairs, Sir Edward Grey laid down the right principle, none too soon in our opinion, and it has now been repeated and emphasized in most judicious language by Lord Hardinge. We believe that after these statements it will no longer be possible for any school of politicians to pretend with any hope of success that because Great Britain controls the destinies

of more Mohammedans than any other Power in the world she is bound to protect the interests of Islam in every quarter of the globe. No one, as we pointed out the other day, would argue that because England supports the Protestant religion she must fly to the help of the Protestants of Holland or Sweden if they were suddenly attacked. Moslems have no more right to demand that England should fly to the help of Moslems wherever they are attacked because England is the greatest of Moslem Powers. Of course, in the East the bond of religion is still regarded as a kind of casus foederis in itself. But in Europe nation- ality long ago replaced religion as the determining common interest. Moslems must know that we are Europeans and must behave as Europeans. What we shall do is to try to maintain a high ideal of justice in the performance of our trust wherever it affects Moslems—that and no more.