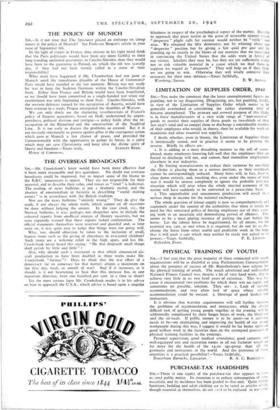 Sta,—You make the comment that the latest unemployment figures are puzzling, not to say disquieting. Disquieting, yes, but purIling, hardly, in view of the Limitation of Supplies Order which seems to be generally overlooked m considering the rather, alarming total of 800,000 unemployed. The primary and avowed purpose of this Order is to force manufacturers of a very wide range of "non-essential" goods to restrict their supplies of these goods to two-thirds of their last year's total and so compel them to discharge a considerable number of their employees who would, in theory, then be available for work us munitions and other essential war supplies.

I doubt whether, even in theory, the Limitation of Supplies Order is intrinsically sound, and in practice it seems to be proving the reverse. Briefly its effects are:

t. It is adding in a most disturbing manner to the roll of unem- ployed, many employers knowing full well that the employees they are forced to discharge will not, and cannot, find immediate employment elsewhere in war industries.

2. By forcing manufacturers to reduce their turnover by one-third the Order is placing them in a serious position, as their overheads cannot be correspondingly reduced. Many firms will, in fact, have to close down entirely, and, touching this, even under the stress of total war it would be unwise completely to ignore the probable post-war situation which will arise when the whole internal economy of the nation will have suddenly to be converted to a peace-time basis.

3. This unprofitable and uneconomic production will result in serious drop in income for the national exchequer.

The whole question of labour supply is now so comprehensively ant supremely under the control of the authorities that there is surely no need for this unnatural policy of forcing employees out of their exist- ing work to an uncertain and demoralising period of idleness. This seems to be a most glaring instance of putting the cart before the horse. Let the labour horse be requisitioned, by all means, for the essential was cart, as and when it is required, but do not let us dis- charge the horse from other useful and profitable work in the hope that it will push a cart which may neither be ready nor suited to its