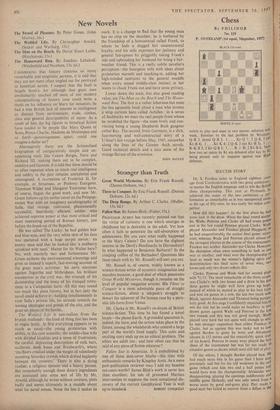 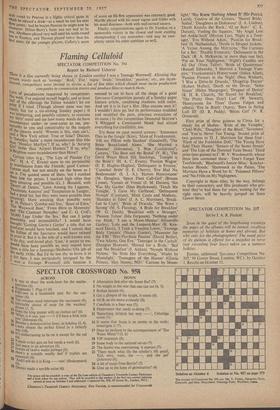 Dr. S. Fazekas came to England eighteen years ago from Czechoslovakia with two great ambitions: to master the English language and to win the British chess championship. This year at Plymouth he achieved the, easier of the two ambitions—a per- formance as remarkable as it was unexpected since* at the age of fifty-nine, he was easily the oldest com- petitor. How did this happen? In the first place he bad, some luck in the draw. When the final round stades' he, Wade, Penrose and Clarke all had seven points and in the last round Penrose played Clarke, Wade played Alexander and Fazekas played Haygarth, s° he had unquestionably the easiest final game; more" over, whereas Wade and Penrose played almost all the strongest players in the course of the tournament. Fazekas met neither Alexander nor Clarke. However, the champion often owes something to luck in one way or another, and what won the championship at, least as much • was the winner's fighting spirit and determination—his final score of seven wins, 10 losses and only two draws reflects this.

Clarke, Penrose and Wade tied for second place with 7•1111. The most remarkable of the three results was Clarke's; with two losses and a draw in his first three games he might well have given up hope, instead of which he started to play in his best form and won six games in a row, the last two (each with Black, against Alexander and Thomas) being particu- larly good. At this stage I confidently expected him l° win the title but he could make no headway in Mt° drawn games against Wade and Penrose in the Iasi two rounds and this was not good enough. Wade played very hard but not quite well enough to win; he met stronger opposition than either Fazekas or Clarke, but as against this was lucky not to lose against Barden (a game he won) and Abrahams (drawn in 115 moves and the remarkably quick time of six hours). Penrose in many ways played the best chess of the tournament but was far too ready to abandon game's as drawn which were still full of play.

Of the others, I thought Barden played best. had much more bite in his game than I have seen previously and but for his old weakness in the end game (which cost him two and a half points net) would, have won the championship. Alexander was, disappointing, playing the openings indifferently and Middle game lifelessly, and was only saved from a worse score by good end-game play. Parr made a good start but failed to recover from a defeat in the smith round by Penrose in a highly critical game in Which he refused a draw—as a result he lost his next three games: had he beaten Penrose he might now be champion. Milner-Barry's form was too bad to be tore, Abrahams played very well until his tenth-round loss to Fazekas, and Thomas played better than his final score. Of the younger players, Cafferty's score

of seven on his l'Irst appearance was extremely good. Mardle played with his usual vigour and Gibbs with his usual dourness—both with well-earned success.

Finally, congratulations again to Dr. Fazekas on a memorable victory in the closest and most exciting championship I can remember—and may he com- pletely attain his other ambition as well.