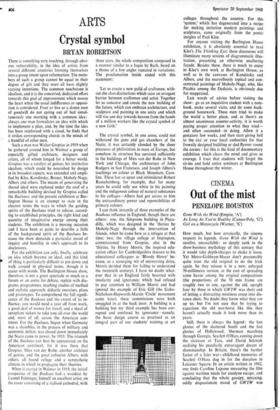 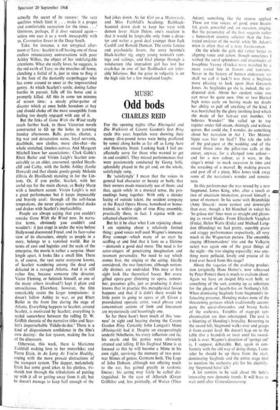 Out of the mist

As Long As You're Healthy (Cameo-Poly, 'U') Girl on a Motorcycle (Warner, 'X') How much, but how erratically, the cinema respects its legends. Gone With the Wind is surefire, unassailable : so deeply sunk in the show-business mythology of this century that it would take depth-charges to shake it loose. Yet Metro-Goldwyn-Mayer don't presumably quite trust the old original to do the trick again. So they reissue it in a new, enlarged 70-millimetre version, at the cost of spreading some havoc among the original compositions (the proportions of the 70 mm frame are roughly two to one, against the old, upright four by three in which GWTW was shot) and of letting a distracting mistiness creep into dis- tance shots. No doubt they know what they are up to; but I'm not sure that by trying to caparison the old war-horse like this they haven't actually made it look more than its years.

Still, there is always the legend : the lost glories of the shattered South and the lost glories of Hollywood; Sherman marching through Georgia, Scarlett O'Hara coming down the staircase at Tara, and David Selznick realising his peculiarly extravagant dream of showmanship. In Britain, there's the further factor of a later war-,--childhood memories of Scarlett O'Hara dug in for the duration in Leicester Square. In an article written in 1942, one finds Caroline Lejeune measuring the film against wartime needs for anodyne escape, and concluding that the whole gossipy, untaxing, oddly dispassionate mood of GWTW was actually the secret of its success: 'the very qualities which limit it . . . make it a proper and comfortable recreation for the times . . Ominous, perhaps, if it does succeed again— unless one sees it as a work inescapably with us, Coronation Street in the Deep South.

Take, for instance, a not untypical after- noon at Tara : Scarlett is off having one of those endless renunciatory conversations with poor Ashley Wilkes, the object of her indefatigable attentions. What she really loves, he suggests, is the red earth of Tara; so she marches off home, clutching a fistful of it, just in time to fling it in the face of the dastardly carpetbagger who has come around to sneer at the impoverished gentry. At which Scarlett's senile, doting father hurtles in pursuit, falls off his horse and is promptly killed. All this in some ten minutes of screen time: a steady pitter-patter of disaster which at once holds boredom at bay and should choke off the most susceptible from feeling too deeply engaged with any of it.

But the links of Gone With the Wind really reach further back, to those Victorian novels constructed to fill up the holes in yawning Sunday afternoons. Balls, parties, chatter, a big war and devastation scene, loyal servants, deathbeds, new clothes, more chit-chat—the whole stretched, timeless canvas. And Margaret Mitchell knew her associations: Clark Gable's Rhett Butler and Vivien Leigh's Scarlett con- ceivably as an older, coarsened, spoiled Heath- cliff and Cathy, with the feeble Ashley (Leslie Howard) and that classic goody-goody Melanie (Olivia de Havilland) standing in for the Lin- tons. Or, if you prefer, Scarlett, with her awful eye for the main chance, as Becky Sharp with a Southern accent. Vivien Leigh's is not a great performance but it keeps impeccably and bravely cool : through all the soft-focus temptations, she never plays sentimental ducks and drakes with Scarlett's implacability.

People are always saying that you couldn't remake Gone With the Wind now. In narra- tive terms, obviously you couldn't and wouldn't: it just crept in under the wire before Hollywood discovered Freud, and its face-value view of its characters, simply as people in a story, belongs to a vanished world. But in terms of cost and logistics and the scale of the enterprise, the movie is rather a surprise. Sheer length apart, it looks like a small film. There is, of course, the vast scene everyone knows, of Scarlett wandering among the dead and defeated in a ravaged Atlanta. And it is still rather fine, because someone (the director, Victor Fleming, or Selznick himself, or one of the many others involved?) kept it plain and unvociferous. Elsewhere, however, the film remarkably resists the larger temptations: it doesn't follow Ashley to war, or put Rhett Butler in the front line during the siege of Atlanta. Everything happens to Scarlett, around Scarlett, is motivated by Scarlett; everything is scaled somewhere between the rolling D. W. Griffith rhetoric of the narrative titles and Scar- lett's imperturbable 'Fiddle-de-dee.' There is a kind of dispassionate confidence in the film's own destiny: the last tycoon, making the last of the dinosaurs.

Otherwise, this week, there is Marianne Faithful! making love to her motorbike; and Pierre Etaix, in As Long As You're Healthy, coping with the more prosaic distractions of the transport system. The dapper, melancholy Etaix has some good jokes in his plotless, TV- sketch trot through the tribulations of putting up with it all or getting away from it all; but he doesn't manage to keep half enough of the

bad jokes down. As for Girl on a Motorcycle, and Miss Faithfull's headlong, flashback- haunted dawn dash to keep her tryst with demon lover Alain Delon, one's reaction is that it would be forgivable only from a direc- tor and writer a good deal younger than Jack Cardiff and Ronald Duncan. The erotic fancies and psychedelic fevers, the sorry heroine's black-leather rig, angry young woman's rant- ings and railings, and final plunge through a windscreen (the imprudent girl has lost her crash-hat in one of her flashbacks) are toler- ably hilarious. But the price in vulgarity is on the high side for a few misplaced laughs.