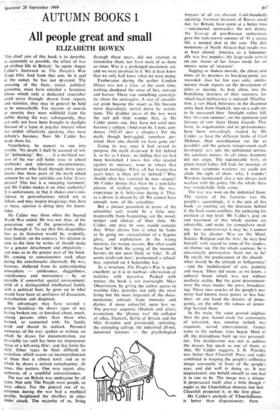 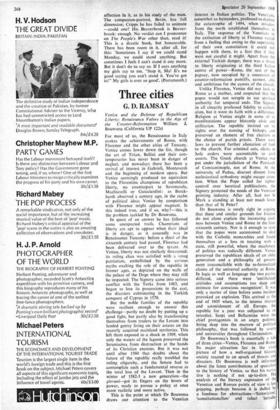 All people great and small

The chief aim of this book is to describe, as accurately as possible, the effect of war on civilian life in Britain'. So opens Angus Calder's foreword to The People's War (Cape 65s). And from that aim, be it said at the outset, he has not deviated. The amassing of the facts, social, political, economic, must have entailed a ferocious labour which only a dedicated researcher could carry through: drawn from reports and statistics, they may in general be held to be unassailable. For reasons of morale or security they were withheld from the public during the war; subsequently, they can only not have been brought to daylight because of a lapse in popalar interest when war ended: effectively speaking, they were nobody's business. Now Mr Calder has made them his.

Nonetheless, he expects to run into trouble. 'No doubt I shall be accused of wil- ful "debunking". But ... if a mythical ver- sion of the war still holds sway in school textbooks and television documentaries, every person who lived through those years knows that those parts of the myth which concern his or her activities are false.' Every person? This last is a sweeping statement; and Mr Calder makes it on what authority? It is unfortunate, in that it shakes one's con- fidence in generalisations which are to follow, and may inspire misgivings that, here or there, opinion is doing duty for know- ledge.

Mr Calder was three when the Second World War ended. He was not, thus, of the generation, any of the generations, that lived through it. To say that this disqualifies him as its historian would be. evidently, most foolish; on the contrary. his relation in time to the time he writes of should make for a greater detachment and objectivity— and does so in the greater part of the book. His coming to consciousness took place during the anticlimactic aftermath. He was, however, sheltered from its contaminating atmosphere — aimlessness, sluggishness, voicelessness and moroseness — by an enviable if somewhat special environment: child of a distinguished intellectual family with a political bent, he grew up in what would have been an ambiance of discussion, re-evaluation and diagnosis.

His advantages may have carried a certain handicap—he shows signs of not having broken out, or knocked about, much, among persons other than those who formed, or connected with, his family circle and shared its outlook. Personal memories of the war, spoken or written, on which he draws for documentation, are invariably (or such has been my impression) those of a left-wing elite: and this limits his field. Other types he finds difficult to assimilate, which causes an incomprehension of them that is almost total, and as to which he shows a certain complacency. At times, this matters. One may regret, also, outbursts of a youthful censoriousness.

The war on Britain was undergone by all types. Not only The People were people, so were others. For the general run of us, existence during the war had a mythical quality, heightened for dwellers in cities under attack. The majority of us, living

through those years. did not attempt to rationalise them, nor have most of us done so since. War is a prolonged passionate act, and we were involved in it. We at least knew that we only half knew what we were doing.

Exuberance during the earlier London blitzes was not a fake: at the same time, nothing deadened the sense of loss, outrage and horror. There was something apocalyp- tic about the onslaughts. A sort of anarchi- cal pride became the resort as life became more degradingly netted down by restric- tions. The drabber years of the war were the real pill—little wonder that, as Mr Calder points out, they have not until now become a subject. (And even he, I note, con- denses 1942-45 into a chapter.) Yet the myth, though bedraggled, somehow per- sisted. How else should we have gone on?

Going its way once it had served its purpose, the myth dispersed. It left behind it, so far as I know, no feeling that we had been bewitched. I know few who reacted against its memory, none in whom that inspired nostalgia. What, all but twenty-five years later, is there left to 'debunk"? Why should what has vanished be now suspect? Mr Calder desires that there be a non-false picture of civilian reaction to the war, experience in it, behaviour during it. That, as a desire, is shared by all. We cannot have enough, now, of the actualities.

But a picture presented in terms of the actualities only would be a false one: inseparable from happenings are the mood, temper and climate of their time. Mr Calder, one may be sure, would concede that. What alarms him is what he holds to be going on—resuscitation of a bygone glory, and exploitation in the wrong interests, for wrong reasons. But what could those be? With the young of the moment, heroics do not seem likely to 'take'. 'It all seems irrelevant now', pronounced a school- boy, reported on 4 September last.

As a structure, The People's War is quite excellent: so it is in method—alternation of statistics with narrative. Packed with matter, the book is not overweight. Mass Observation, by giving the author access to wartime files, provides not only the most living but the most impartial of the docu- mentation; extracts from memoirs and diaries, if more colourful, seem less so. The pre-war suspense (Munich and after), evacuation, the 'phoney war' the collapse of allies, Dunkirk, Battle of Britain and the blitz (London and provincial), rationing, the extending call-up, the industrial all-out, industrial tensions — the psychological impacts of all are charted. Cold-bloodedly speaking. German invasion of Russia could not, for Britain, have come at a better time —unexpected, spectacular, the new drama. the flare-up of pro-Russian enthusiasm. gave the ruin-strewn summer of '41 a saving lift, a needed shot in the arm. The dire monotony of North African bad results was at least abated. America as a latecomer ally was less popular; the large-scale arrival on our shores of her forces made for an uneasy sense of 'invasion'.

Sagging or shaken morale, the places and times of its nearness to breaking-point, are recorded. then for few eyes only; similar secrecy made reports on the devastation of cities as sparing. As bad, often, was the brutalising slowness of their recovery, for which local inefficiency is indicted. Disaffec- tion, a raw black bitterness in the disarmed army back from Dunkirk, was on a scale not to be measured then—limelight rather fell, that 'invasion summer', on the optimism and fervour of LDV (later Home Guard). That force, its organisation and its performances, have been rewardingly studied by Mr Calder. as have the different limbs of Civil Defence, their coordination (so far as possible) and the generic temperament each developed: AFS, ARP, the ambulance service, the auxiliary nurses. At off times, harmony did not reign. The indomitable wvs, or green tweed ladies, fell foul, for instance, of us more saturnine wardens: we could not abide the sight of them—why, I wonder? Wardens maintained also a not always tacit warfare with the police. On the whole there was wonderfully little crime.

The war was won on the industrial front. The victory of the factories was the people's: accordingly, it is the epic of this book--as exciting are the decisions behind it, the back-room conflicts, the jockeying for position at top level. Mr Calder's grip on and treatment of this whole section are admirable, and make for compulsive read- ing—how controversial it may be, I cannot tell.- In his chapter War on the Mind: Science. Religion and the Arts', he may find himself, with regard to some of his readers. on thinner ice. On the whole cautious, he is occasionally provocative—hard not to be! He recalls the predicament of the church- what should be the attitude to belligerence? —and the 'mobilisation' of arts, painting and music. There did occur, as we know, a cultural boom which was not without aesthetic reality. But the giant determinant, were the mass media: the press, broadcast- ing. Those two, oracles of the people's war. never had known more power or less free- dom: on one hand the dictates of propa- ganda, on the other the taboos of censor- ship harried them.

In the main, the voice proved mightier than the pen. Sound made for community of sensation, was emotive (which was required), served entertainment. Genius came to the surface: ITMA began. Most of all, the microphone built up star personali ties. The desideratum was not to address the masses but speak as one of them; at that, Mr Calder suggests, B. Priestley was better than Churchill. Press and radio combined in keeping the people's collective image constantly in front of the people's eyes, and did well in doing so. It was inspirational; one beheld oneself as one had it in one to be. The image was a winner It perpetuated itself, alter a little though i• might as the Churchillian rhetoric lost hole Churchill projected it., in the first place.

Mr Calder's analysis of 'Churchillianisi is better than dispassionate; there

affection In it, as in his study of the man. The companion-portrait, Bevin, has full dimension; Cripps he has failed to animate —could one? His Beaverbrook is Beaver- brook: enough. No verdict can I pronounce on The People's War other than, read it! This is a drastic book; but honourable. There has been room in it, after all, for this: 'Sometimes I say if we could stand Monday, we could stand anything. But sometimes I feels I can't stand it any more. But it don't do to say so. If I says anything my girls say to me, "Stop it, Ma! It's no good saying you can't stand it. You've got to!" My girls is ever so good'. (Portsmouth.)