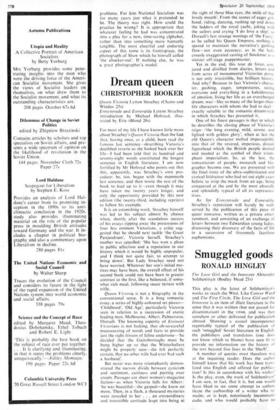 Queen Victoria Lytton Strachey (Chatto and Windus 25s) Ermyntrude and Esmeralda Lytton Strachey introduction by Michael Holroyd, illus- trated by Erte (Blond 20s) For most of my life I have known little more about Strachey's Queen Victoria than the fact that, having once, as a child, been read the famous last sentence—describing Victoria's deathbed reverie as she looked back over her life—I had been told that its hundred and seventy-eight words constituted the longest sentence in English literature. I am now fortified by Mr Holroyd who points out that this, apparently, was Strachey's own pro- cedure: he, too, began with the mammoth last sentence, and then wrote the rest of the book to lead up to it—even though it may have taken me twenty years longer, and only the opportunity provided by this new edition (the twenty-third, including reprints) to follow his example.

It is an astonishing work. Strachey himself was led to his subject almost by chance when, shortly after the scandalous success of his essays ripping away the pretensions of four less eminent Victorians, a critic sug- gested that he should next tackle 'the Great Panjandrum', Victoria herself. Strachey's mother was appalled: 'She has won a place in public affection and a reputation in our history which it would be highly unpopular. and I think not quite fair, to attempt to bring down'. But Lady Strachey need not have worried. Whatever her son's initial mo- tives may have been, the overall effect of his second book could not have been in greater contrast to the first, like a balanced, if some- what rich meal, following sauce tartare with trifle.

Queen Victoria is not a biography in the conventional sense. It is a long romantic essay, a series of highly-coloured set pieces— `Childhood', 'Old Age', particularly Victoria seen in relation to a succession of exotic leading men, Melbourne, Albert, Palmerston, Disraeli. The knowing asperity of Eminent Victorians is not lacking, that oh-so-careful manoeuvring of words and facts to provide just the right frisson of feline undertone—'he decided that the Gainsboroughs must be hung higher up so that the Winterhalters might be properly seen—she felt perfectly certain, that no other wife had ever had such a husband'.

But never was more triumphantly demon- strated the narrow divide between cynicism and sentiment, cattiness and purring over cream. Passages are sheer women's magazine fiction—as when Victoria falls for Albert: `he was beautiful—she gasped—she knew no more. Then, in a flash, a thousand mysteries were revealed to her . . • an extraordinary and irresistible certitude leapt into being at

the sight of those blue eyes, the smile of that lovely mouth'. From the scenes of eager girl- hood, riding, dancing, rushing up and down the ladders of the royal yacht, joking with the sailors and crying 'I do love a ship', to Disraeli's last strange wooings of 'the Faery', as he called his Queen Empress, nothing is spared to maintain the narrative's gushing flow—not even accuracy, as in the ludi- crously exaggerated casting of Stockmar as a sinister off-stage puppetmaster.

Yet in the end, this tour de force, con- jured and distilled from diaries, letters and from acres of monumental Victorian prose. is not only irresistible, but brilliant history. And why? Because in fact Victoria's charac- ter, gushing, eager, tempestuous, seeing everyone and everything in a kaleidoscope of emotion, living her life as an overcharged dream, was—like so many of the larger-than- life characters with whom she had to deal- - exactly suitable to the romantic dream-style in which Strachey has presented it.

One of his finest passages is that in which he describes the closing phase of Victoria's reign—`the long evening, mild, serene, and lighted with golden glory', when at last the old Queen's character melted imperceptibly into that of the revered, imperious, distant figurehead which the British people desired and needed as the symbol of their trium- phant imperialism. So, at the last, the romanticism of people, monarch and bio- grapher become one. We are presented with the final irony of the ultra-sophisticated and cynical litterateur who had set out eight years before to strip the mask from an age, being conquered at the end by the most absurdly and splendidly typical of all its representa- tives.

As for Ermynirude and Esmeralda. Strachey's reputation will hardly be well- served by the publication of this piece of queer nonsense, written as a private enter- tainment, and consisting of an exchange of letters between two Edwardian young ladies. discussing their discovery of the facts of life in a succession of tiresomely facetious euphemisms.