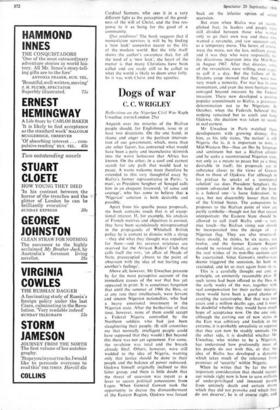 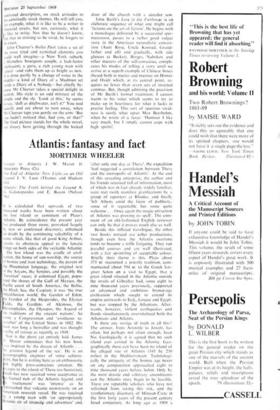 C. C. WRIGLEY Reflections on the Nigerian Civil War Raph Uwechue (orrn/London 25s) Anguish over the miseries of the Biafran people should, for Englishmen, issue in at least two directions. On the one hand, in shame and anger at the partisan interven- tion of our government, which, more than any other factor, has converted what would- have been a petty and inconclusive skirmish into the worst holocaust that Africa has known. On the other, in a cool and earnest search for any path that would lead to peace. A warm welcome must therefore be extended to this very thoughtful essay by Biafra's former representative in Paris: 'a man', as President Senghor of Senegal calls him in an eloquent foreword, 'of sense and courage', who has come to believe that a `Nigerian' solution is both desirable and possible.

Apart from his specific peace proposals, the book contains much that is of excep- tional interest. If, for example, his analysis of French motives and objectives is correct, they have been scandalously misrepresented in the propaganda of Whitehall. British policy he is content to dismiss with a shrug —they did what they thought was expedient for them—and his severest strictures are reserved for the African Rulers' Club that calls itself the OAU, 'an affair of Heads of State, preoccupied almost to the point of obsession with the idea of not hurting one another's feelings'.

Above all, however, Mr Uwechue presents by far the most perceptive account of the immediate causes of the war that has yet appeared in print. It Is sometimes forgotten that until the summer of 1966 the Ibos, or at any rate their intellectuals, were fervent and sincere Nigerian nationalists, who had a heavy emotional investment in the Nigerian state. After the barbarities of that time, however, none of them could accept a Federal Nigeria controlled by the Northern soldiers who had just been slaughtering their people. (It still astonishes me that normally intelligent people could have supposed that they would.) But beyond this there was not yet agreement. For some, the revulsion was total and the breach already final. Others, however, were still wedded to the idea of Nigeria, wanting only that justice should be done to their people and the balance of power redressed. Ojukwu himself originally inclined to this latter group, and there is little doubt that the threat of secession was meant as a lever to secure political concessions from Lagos. When General Gowon took the opportunity to decree the dismemberment of the Eastern Region, Ojukwu was forced back on the inferior option of actual secession.

But even when Biafra was an accom. plished fact, its leaders and people were still, divided between those who wanted only to go their own way and those who wanted a revanche, and saw secession only as a temporary move. The latter, of course, were the more, not the less, militant group, and it was they who were responsible for the disastrous incursion into the Mid-West in August 1967. After that disaster, some of the revanchists were willing, even eager, to call it a day. But the failure of the Ifeajuna coup showed that they were now very much a minority. For war has its own momentum, and even the most hesitant were outraged beyond measure by the Federal invasion. There now developed a positive popular commitment to Biafra, a grassroots determination not to be Nigerians. In October, when the Federals believed that noting remained but to catch and hang Ojukwu, the decision was taken to secede in real earnest.

Mr Uwechue in Paris watched these developments with growing dismay. For him, as his title states, 'the nation' is still Nigeria (he is, it is important to note, a Mid-Western Ibo—thus an Ibo by language and sentiment but not a Biafran citizen) and he seeks a reconstructed Nigerian state, not only as a means to peace but as a thing desirable in itself; his proposals are in substance closer to the views of Gowon than to those of Ojukwu. For although in his preface he speaks of a 'confederal solution' (as does President Senghor), the system advocated in the body of the book is a federal one—`a loose federation', he says, but not discernibly looser than that of the United States. The concessions he proposes to the Biafran point of view are partly symbolic—though not for that reason unimportant: the Eastern State should be allowed to call itself Biafra and—a very nice touch—the Biafran rising sun should be incorporated into the design of to Nigerian flag. They are also structural: there should, he thinks, be six states, not twelve, and the former Eastern Region should be restored intact, at any rate until the real wishes of its non-Ibo sections can be ascertained. Since Gowon's twelve-state decree triggered the secession, let both be rescinded, and let us start again from thy re.

This is a carefully thought out and, in principle, an eminently reasonable plan. If such terms had been offered to the lbos in the early weeks of the war, together with real compensation for their earlier injuries, there would have been a good chance of aveTting the catastrophe. But that was two years and a million deaths ago, and it must be doubtful whether they would have much hope of acceptance now. On the one side, although the carving out of new states in the East was arbitrary and foolish in the extreme, it is probably unrealistic to suppose that they can now be readily unmade. On the other side, it is doubtful whether Mr Uwechue, who wishes to be a Nigerian, has understood how profoundly most of his people do not wish this, or that the idea of Biafra has developed a dynamic which takes much of the relevance from promises of 'security' within Nigeria.

Mien he writes that `by far the most important consideration that should occupy our minds right now is how to save millions of under-privileged and innocent people from untimely death and certain doom which they did not provoke and which they do not deserve', he is of course right, and

ventional description, on stock attitudes to his admittedly stock themes. He will tell you, for example, what it is like to be a writer in financial straits, but not, curiously, what it is like to write. Not that he doesn't know, but that in striving to be vivid, he forgets to be exact.

John Cheever's Bullet Park takes a set of the most tired and tarnished elements you could well imagine—a New York suburb, 3 blameless bourgeois couple, a lack-lustre adolescent, a guru, a rich young man with (afard—and rubs them up as bright as new. It is done partly by a change of voice in the middle—a kind of Diary of a Madman set inside a Diary of a Nobody—but chiefly be- cause Mr Cheever takes a special delight in tarnish. His style is an odd mixture of the simple and the sly. `Look at this,' he seems to say, 'dull as ditchwater, isn't it?' You nod wearily and are about to turn away, when Mr Cheever taps you gently on the arm: 'But lou hadn't noticed that, had you, or that?' The final picture stands for the whole novel, our dreary hero getting through the locked

door of the church with a circular saw.

John Barth's Lost in the Funhouse is an elaborate sequence of what one might call 'fictions on the art of fiction'. He begins with a monologue delivered by a successful sper- matozoon, passes to a rather good vulgar story in the American naturalistic conven- tion (Aunt Rosa, Uncle Konrad, Grand- father and all) and gradually, with side glances at Beckett, Borges, Nabokov and other masters of the self-conscious, compli- cates his modes of telling a story until we arrive at a superb example of Chinese boxes (based both in matter and manner on Homer and Ovid) which, at its central point, re- quires no fewer than seven sets of inverted commas. But, though admiring the precision of Mr Barth's formal treatment, I cannot warm to his voice which seems to try to make up in heartiness for what it lacks in precise feeling. This sort of spurious vivid- ness is surely what upset Max Beerbohm, when he wrote of a farce: 'Humour I like very much, but 1 simply cannot cope with high spirits'.