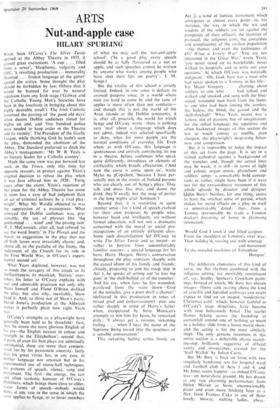 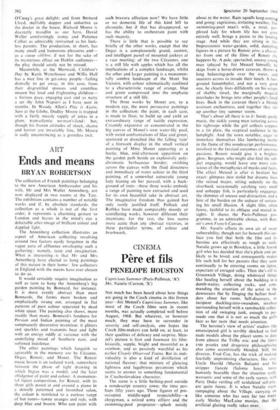 When Sean O'Casey's The Silver Tassie opened at the Abbey Theatre in 1935, it caused great excitement. 'A cup ... filled from a sewer', 'blasphemy, vulgarity and filth', 'a revolting production ... immorality flaunted . . . foulest language of the gutter' agreed the critics. Some thought the play should be forbidden by law. Others that it would be banned for ever by natural repulsion from any Irish stage (`Galway and the Catholic Young Men's Societies have been in the forefront in bringing about this highly desirable result'). The Irish Catholic lamented the passing of 'the good old days' when decent Dublin audiences rioted for nights on end, and 'five hundred police were needed to keep ,order in the Theatre and its vicinity'. The President of the Gaelic League, while thanking God he hadn't seen the play, demanded the abolition of the Abbey. The Standard preferred to ditch the Abbey's management: `Mr W. B. Yeats is no literary leader for a Catholic country'.

Much the same view was put forward last week in the Times, only this time for opposite reasons, in protest against Yeats's original decision to refuse the play when it was first offered him in 1928: 'Forty years after the event, Yeats's rejection of this piece for the Abbey Theatre has come to seem less a case of bad judgment than an act of criminal jealousy by a rival play- wright'. What Mr Wardle objected to was the suppression of a masterpiece. What annoyed the Dublin audiences was, pre- sumably, . the use of phrases like 'the goddamned . .. wind' and 'the pissing rain' IF. J. McCormick, after all, had refused 'to say the word Snotty' in The Plough and the Stars); to suggestions in the play that not all Irish lasses were invariably chaste; and, above all, to the pastiche of the litany, the indictment of the Church for its role in the First World War, in 0-Casey's experi- mental second act.

What Yeats deplored, however, was not so much the savagery of this attack as its ineffectiveness, its mawkish, 'literary' over- tones; his letter to O'Casey explains with tact and admirable precision not only why Yeats himself and Flann O'Brien disliked the play, but also why, inevitably, Shaw liked it. And, to those not of Shaw's party, David Jones's production at the Aldwych makes it perfectly plain how right Yeats was.

O'Casey's strengths as a playwright have generally been held to be threefold: first, that 'he wrote the most glorious English of his era—the English nearest in colour and strength to the Elizabethan'; second that, II parts of even his best plays are admittedly sentimental, these are more than compen- sated for by his passionate sincerity; lastly that his great virtue lies, in any case, in neither language nor emotion but in his experimental use of music-hall techniques, his patterns of speech, silence, song and movement. The first—the energy, the tart and often sardonic humour of O'Casey's Dubliners, which brings them close to older, racier forms of speech—nobody would deny, at any rate in the sense in which the same applies to Synge, or to lesser members

of what we may call the 'nut-and-apple school'. ('In a good play every speech should be as fully flavoured as a nut or apple, and such speeches cannot be written by anyone who works among people who have shut their lips on poetry': J. M. Synge.) But the vitality of this school is strictly limited. Indeed, in one sense it defeats its avowed purpose since, in a world where nuts are hard to come by and the taste of apples is more often than not synthetic— and though this is not the world of the Aran islands or the Dublin tenements, it is, after all, precisely the world for which Synge and O'Casey wrote—there is nothing very 'real' about a language which does not admit, indeed was selected specifically to deny, what for most people are the normal conditions of everyday life. Even when, as with O'Casey, this language is spontaneous and entirely convincing, its use in a theatre, before audiences who speak quite differently, introduces an element of artificiality which breeds affectation. (`And now the curse is come upon us', wrote Myles na gCopaleen, 'because I have per- sonally met in the streets of Ireland persons who are clearly out of Synge's plays. They talk and dress like that, and damn the drink they'll swally but the mug of porter in the long nights after Samhain.')

Beyond that, it is restrictive in quite another sense—for a kind of speech evolved for their own purposes by people who, however lucid and intelligent, are without formal education, will not suit a dramatist concerned with the moral or social pre- occupations of an entirely different class. Some such dissatisfaction led O'Casey to write The Silver Tassie and to invent—or rather to borrow from uncomfortably familiar sources—a special language for his hero, Harry Heegan. Harry's conversation throughout the play contrasts sharply with the casual idiom of his family and friends; already, preparing to join his troop ship in Act 1, he speaks of setting out `to kiss the guns' in 'the shell-bullied air of the trenches'. And his cry, when later he lies wounded, paralysed from the waist down—`God of the miracles, give a poor devil a chance!' (delivered in this production in tones of mixed grief and embarrassment)—puts one rather sharply in mind of Harry's father when, exasperated by Susie Monican's attempts to win him for Jesus, he remarked drily : 'I always get a curious, sickening feeling . . . when I hear the name of the Supreme Being tossed into the quietness of a sensible conversation.'

This sickening feeling settles firmly on

Act 2, a kind of fantasy movement which anticipates at almost every point—in, for instance, the way in which the wit and wisdom of the soldiers are set against the pomposity of their officers, the inanities of protocol, the religious cant, the cowardice and complacency of the civilian population —the themes and even the techniques of Oh! What a Lovely War! You are not interested in the Great War.' wrote Yeats, 'you never stood on its battlefields, never walked its hospitals, and so write out your opinions.' At which O'Casey was naturally indignant: 'Oh, God, here was a man who had never spoken to a Tommy in his life— bar Major Gregory . . . chatting about soldiers to one who . . . had talked and walked and smoked and sung with the blue- suited, wounded men fresh from the front; to one who had been among the armless, the legless, the blind, the gassed and the shell-shocked!' What Yeats meant was a failure, not of passion, but of imagination; for the stilted language, the repetitive and often hackneyed images of this section do not so much convey as muffle, even cheapen, the playwright's despairing bitter- ness and compassion.

But it is impossible to judge the impact of this act from the page. It is set in a ruined cathedral against a background of the trenches and, though the actual lines may be weak, it is still—in terms of light and colour, organ music, plainchant and soldiers' songs—a remarkably bold concep- tion; or rather, might have been if it were not for the extraordinary treatment of this whole episode by director and designer tighn Bury). Neither, for one thing, seems to have the smallest sense of period, which makes for weird effects on a play in itself so unmistakably dated: thus, from a Tommy (presumably by trade a London docker) dreaming of home in plainsong 'intonation: 'Would God I smok'd and lifted cargoes From the shoulders of London's river way; Then holiday'd, roaring out with courage and movement

To the muscled machines of Tottenham

The deliberate clumsiness of this kind of verse, the flat rhythms combined with the religious setting, are inevitably reminiscent of, say, Stanley Spencer's Cookham paint- ings. Instead of which, Mr Bury has chosen images—flimsy tank rearing above the kind of crucifix and lopsided archways you might expect to find on an insipid, 'modernistic' Christmas card—which, however faithful to O'Casey's stage directions, have become with time ludicrously banal. The scarlet flames licking across the backdrop at curtainfall remind one of nothing so much as a holiday slide from a home movie show; and the acting is for the most similarly inept. The only genuine invention in this entire section is a delectable elastic march- ing-step, brilliantly suggestive of official vanity and insouciance, created for the 'Staff Wallah' by Julian Curry.

But Mr Bury is back on form with two singularly handsome sets for hospital ward and football club in Acts 3 and 4: and Mr Jones seems happier—as indeed O'Casey was—on naturalistic ground. He has drawn at any rate charming performances from

Helen Mirren as Susie, unconscionably pious and even more fetching later as a

flirt: from Frances Cuka as one of those lovely, blowzy, melting ladies, alwa!,.

O'Casey's great delight; and from Bernard Lloyd, ineffably dapper and seductive as the doctor in the house. Richard Moore is discreetly maudlin as our hero, David Waller comfortingly ironic and Patience Collier as admirably restrained as his luck- less parents. The production, in short, has many small and humorous pleasures and— as a cause célebre, if not for the sake of its mysterious effect on Dublin audiences— the play should surely not be missed.

Meanwhile, at the Mermaid, Children's Day by Keith Waterhouse and Willis Hall has a nice line in get-away people—failing dismally to get away, in this case, from their disgruntled spouses and countless unseen but loud and frightening children— a furious pace, engaging cast and as natty a set (by John Napier) as I have seen in months. In Woody Allen's Play it Again, Sam at the Globe, Dudley Moore is trapped with a fairly measly supply of jokes in a glum, transatlantic no-man's-land: but, though his frozen attitudes of shock, shame and horror are invariably fine, Mr Moore is sadly unconvincing as a gormless twit.