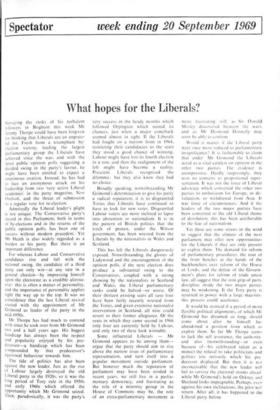 What hopes for the Liberals?

Surveying the ranks of his turbulent followers in Brighton this week Mr Jeremy Thorpe could have been forgiven for thinking that Liberals are an ungrate- ful lot. Fresh from a triumphant by- election victory, leading the largest parliamentary group the Liberals have achieved since the war, and with the latest public opinion polls suggesting a decided swing in the party's favour, he might have been entitled to expect a unanimous ovation. Instead, he has had to face an anonymous attack on his leadership from two 'very active Liberal academics' in the party magazine, New Outlook, and the threat of submission to a regular vote for re-election.

Admittedly the Liberal leader's plight is not unique. The Conservative party's record in this Parliament, both in terms of by-elections and in the returns of the public opinion polls, has been one of success without modern precedent. Yet Mr Heath is also widely regarded as a burden to his party. But there is an important difference.

For whereas Labour and Conservative candidates rise and fall with the national swing, the candidate of a third party can only win—at any rate in a general election—by impressing himself upon the electorate as a credible alterna- tive: this is often a matter of personality, and the importance of personality applies right the way up to the top. It was no coincidence that the last Liberal revival started with the appointment of Mr Grimond as leader of the party in the mid-1950s.

Mr Thorpe has had much to contend with since.he took over from Mr Grimond two and a half years ago. His biggest handicap has always been the respect and popularity enjoyed by his pre- decessor—a handicap which has been compounded by that predecessor's equivocal behaviour towards him.

The tide of politics has also been against the new leader. Just as the rise of Labour largely destroyed the old Liberal party in the 1920s, so it was the long period of Tory rule in the 1950s and early 1960s which offered the opportunity which Mr Grimond seized. Then, paradoxically, it was the party's very success in the heady months which followed Orpington which ruined its chances, just when a major comeback seemed almost in sight. if the Liberals had fought on a narrow front in 1964, restricting their candidacies to the seats they stood a good chance of winning, Labour might have lost its fourth election in a row, and then the realignment of the left might have become a reality. Prescient Liberals recognised the dilemma: but they also knew they had no choice.

Broadly speaking. notwithstanding Mr Grimond's determination to give his party a radical reputation, it is to disgruntled Tories that Liberals have continued to have to look for new votes. Disgruntled Labour voters are more inclined to lapse into abstention or nationalism. It is in the pattern of British politics that the torch of protest, under the Wilson government, has been wrested from the Liberals by the nationalists in Wales and Scotland.

This has left the Liberals dangerously exposed. Notwithstanding the glories of Ladywood and the encouragement of the opinion polls, if the next election does produce a substantial swing to the Conservatives, coupled with a strong showing by the nationalists in Scotland and Wales, the Liberal parliamentary ranks could be halved—or worse. Of their thirteen existing seats all save four have been fairly recently wrested from the Tories, and given extensive nationalist intervention in Scotland, all nine could revert to their former allegiance. Of the seats in which they came second in 1966 only four are currently held by Labour, and only two of these look winnable.

Some influential Liberals — Mr Grimond appears to be among them— argue that the party should aim to rise above the narrow issue of parliamentary representation, and turn itself into a popular movement outside parliament. But however much the reputation of parliament may have been eroded in recent years, we still live in a parlia- mentary democracy, and frustrating as the role of a minority group in the House of Commons may be, the role of an extra-parliamentary movement is more frustrating still, as Sir Oswald Mosley discovered between the wars. and as Mr Desmond Donnelly may soon be able to confirm Would it matter if the Liberal party were once more reduced to parliamentary insignificance? It is fashionable to claim that under Mr Grimond the Liberals acted as a vital catalyst on opinion in the other two parties. The evidence is unimpressive. Hardly surprisingly, they won no converts to proportional repre- sentation. It was not the force of Liberal advocacy which converted the other two parties to enthusiasm for Europe, or de- valuation, or withdrawal from Asia. It was force of circumstances. And if the leaders of the two major parties have been converted to the old Liberal theme of devolution. this has been attributable to the fear of nationalism.

Yet there are some straws in the wind to suggest that the climate of the next parliament may offer new opportunities for the Liberals if they are only present to exploit them. The demand for reform of parliamentary procedures. the rout of the front benches at the hands of the backbenchers over reform of the House of Lords, and the defeat of the Govern- ment's plans for reform of trade union law, all suggest that the iron grip of party discipline inside the two major parties may be weakening. It the Tory party is returned to power with a large majority. this process could accelerate.

It would be ironical if a period of more flexible political alignments, of which Mr Grimond has dreamed so long, should come about after he himself ha• abandoned a position from which to exploit them. So far Mr Thorpe seems to lack the self assurance, the authority and also (notwithstanding—or even because of—his celebrated talent as a mimic) the refusal to take politicians and politics too seriously which his pre- decessor displayed. But then it is not inconceivable that the new leader will fail to survive the electoral storms ahead while Mr Grimond's hold on Orkney and Shetland looks impregnable. Perhaps. even against his own inclinations, the pilot will return. After all, it has happened to the Liberal party before.