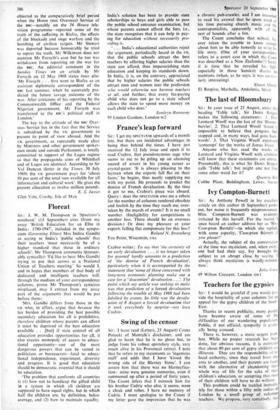 Swing of the censor

Sir: I have read (Letters, 23 August) Count Potocki of Montalk's disclaimer, and am glad to learn that he is no ghost but, to judge from his robust epistolary style, very much alive in his Provencal retreat. I note that he refers to my statements as 'ingenious stuff' and adds that I have 'kissed the wrong side of the Blarney Stone'. I can assure him that there was no blarneyfica- tion : mine were genuine memories, even if summoned up after a period of forty years. The Count infers that I mistook him for his brother Cedric who also, it seems, wore a cloak and robes. I have no memory of Cedric. I must apologise to the Count if my letter gave the impression that he was a chronic pub-crawler, and I am interested to read his avowal that he spent much of his time pursuing church music and the contrapuntalists, apparently with all the zest of hounds after a fox.

The Count concludes that nobody has ever taken the trouble to know enough about him to be able honestly to write his life story. (One of your correspondents refers to a court case in which the Count was described as a New Zealander!) Surely it is time that he revealed his light. especially in those Sanskrit diaries he mentions (when, as he says, it was particu- larly interesting).