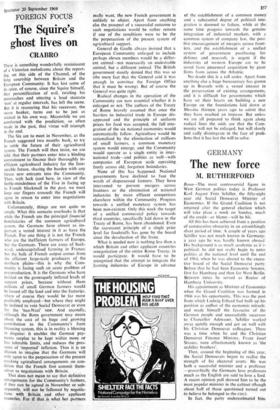 The Squire's ghost lives on

There is something wonderfully reminiscent of a Victorian melodrama about the report- ing, on this side of the Channel, of the long courtship between Britain and the European Community. It has lost some of its spice, of course, since the Squire himself, that personification of evil, twirling his moustaches and uttering a loud staccato `non' at regular intervals, has left the scene. But it is reassuring that his successor, the suave banker, turns out to be just as wicked in his own way. Meanwhile we are comforted with the prediction, so often made in the past, that virtue will triumph in the end.

The Six are to meet in November, as the French suggested two months back, to try to settle the future of their agricultural system. The French will then insist, we are told, that their partners enter into a binding commitment to finance their thoroughly in- efficient agricultural industry for the fore- seeable future, sharing the burden with any future new entrants into the Community. Then, with luck (and here, in view of the feeble-mindedness of the Five in facing up to French blackmail in the past, we must keep our fingers crossed) the French will agree in return to enter into negotiations with Britain.

Unfortunately, things are not quite so simple. What this scenario overlooks is that while the French are the principal financial beneficiaries of the common agricultural system, the Germans have almost as im- portant a vested interest in it as have the French. For one thing it is not the French who are the inefficient farmers of Europe, but the Germans. There are areas of back- ward, undercapitalised farming in France; but the bulk of French output comes from the efficient large-scale producers of the northern plains—this is why the Com- munity is facing such an acute problem of overproduction. It is the Germans who have insisted on the grotesquely inflated levels of support prices, because without them millions of small German farmers would be forced off the land and into the factories, where of course they would be far more profitably employed—but where they might be inclined to vote Social Democrat or even for the 'neo-Nazi' NDP. And secondly, although the Bonn government may mban about the cost of its huge and growing contribution to the Community's farm financing system, this is in reality a blessing in disguise: it enables the German pay- ments surplus to be kept within more or less tolerable limits, and reduces the pres- sures of 'imported' inflation. Thus it is an illusion to imagine that the Germans will only agree to the perpetuation of the present creaking agricultural arrangements on con- dition that the French first commit them- selves to negotiations with Britain.

That does not mean to say that definitive arrangements for the Community's farmers, if they can be agreed in November or sub- sequently, will not be followed by negotia- tions with Britain and other applicant countries. For if that is what her partners really want, the new French government is unlikely to object. Apart from anything else the prospect of a successful outcome to such negotiations would be rather remote if one of the conditions were to be the the perpetuation of the present system of agricultural support. General de Gaulle always insisted that a European Community enlarged to include perhaps eleven members would be a differ- ent animal—not necessarily an undesirable animal, but a different animal. The Biitish government stoutly denied that this was so (the mere fact that the General said it was enough to convince the Foreign Office that it must be wrong). But of course the General was quite right.

Radical changes in the operation of the Community are now essential whether it is enlarged or not. The authors of the Treaty of Rome bravely assumed that once the barriers to industrial trade in Europe dis- appeared and the principle of uniform prices for food was accepted, the full inte- gration of the six national economies would automatically follow. Agriculture would be rationalised by the elimination of millions of small farmers, a common monetary system would emerge, and the Community would operate as a single entity in inter- national trade—and politics as well—with companies of European scale operating freely across old, forgotten boundaries.

None of this has happened. National governments have declined to face the wrath of dispossessed farmers. They have intervened to prevent mergers across frontiers or the elimination of national industries by more efficent competitors elsewhere within the Community. Progress towards a unified monetary system has been non-existent. Only this week the target of a unified commercial policy towards third countries, specifically laid down in the Treaty of Rome, has been abandoned. Even the sacrosanct principle of a single price level for foodstuffs has gone by the board since the devaluation of the franc.

What is needed now is nothing less than a which Britain and other applicant countries renegotiation of the entire Rome Treaty, in would participate. It would have to be recognised that the attempt to integrate the farming industries of Europe in advance of the establishment of a common money and a substantial degree of political inte- gration is doomed to failure, while at the same time progress towards the genuine integration of industrial markets, with a common system of company law, the posi- tive encouragement of mergers across front- iers, and the establishment of a unified system of government purchasing for defence and research, is urgent if the industries of western Europe are to be saved from piecemeal acquisition by giant firms from across the Atlantic.

No doubt this is a tall order. Apart from anything else a huge bureaucracy has grown up in Brussels with a vested interest in the preservation of existing arrangements, and it is difficult for governments which have set their hearts on building a new Europe on the foundations laid down at Messina thirteen years ago to admit that they have reached an impasse. But unless we are all prepared to think again along radical lines the odds are that the Com- munity will not be enlarged, but will slowly and sadly disintegrate in the face of prob- lems that it has lost the will to solve.