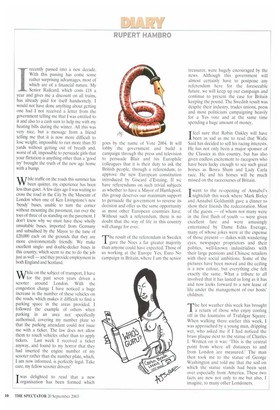 I recently passed into a new decade. With this passing has

come some rather surprising advantages, most of which are of a financial nature. My Senior Railcard, which costs £.18 a year and gives me a discount on all trains, has already paid for itself handsomely. I would not have done anything about getting one had I not received a letter from the government telling me that I was entitled to it and also to a cash sum to help me with my heating bills during the winter. All this was very nice, but a message from a friend telling me that it is now more difficult to lose weight, impossible to run more than 50 yards without getting out of breath and, worst of all, impossible to persuade girls that your flirtation is anything other than a 'good try' brought the truth of the new age home with a bump.

While traffic on the roads this summer has been quieter, my experience has been less than quiet. A few days ago! was waiting to cross the road in the City by the Museum of London when one of Ken Livingstone's new 'bendy' buses, unable to turn the corner without mounting the pavement, ran over the toes of three of us standing on the pavement I don't know why we must have these wholly unsuitable buses, imported from Germany and subsidised by the Mayor to the tune of £20,000 each on the grounds that they are more environmentally friendly. We make excellent singleand double-decker buses in this country, which seem to me to do the job just as well—and they provide employment in both England and Scotland.

While on the subject of transport, I have for the past seven years driven a scooter around London. With the congestion charge I have noticed a huge increase in the number of these vehicles on the roads, which makes it difficult to find a parking space in the areas provided. I followed the example of others when parking in an area not specifically authorised, covering my number plate so that the parking attendant could not issue me with a ticket. The law does not allow them to touch vehicles other than to apply

tickets. Last week I received a ticket anyway, and found to my horror that they had inserted the engine number of my scooter rather than the number plate, which, I am now informed, is perfectly legal. Take care, my fellow scooter drivers!

goes by the name of Vote 2004. It will lobby the government and build a campaign through the press and television to persuade Blair and his Europhile colleagues that it is their duty to ask the British people, through a referendum, to approve the new European constitution introduced by Giscard d'Estaing. If we have referendums on such trivial subjects as whether to have a Mayor of Hartlepool, this group deserves our maximum support to persuade the government to reverse its decision and offer us the same opportunity as most other European countries have. Without such a referendum, there is no doubt that the way of life in this country will change for ever.

The result of the referendum in Sweden gave the Noes a far greater majority than anyone could have expected. Those of us working at the Europe Yes, Euro No campaign in Britain, where I am the senior

treasurer, were hugely encouraged by the news. Although this government will almost certainly have to postpone any referendum here for the foreseeable future, we will keep up our campaign and continue to present the case for Britain keeping the pound. The Swedish result was despite their industry, trades unions, press and most politicians campaigning heavily for a Yes vote and at the same time spending a huge amount of money.

Ifeel sure that Robin Oakley will have been as sad as me to read that Wafic Said has decided to sell his racing interests. He has not only been a major sponsor of the Classics in this country, but has also given endless excitement to racegoers who have been lucky enough to see such great horses as Bosra Sham and Lady Carla race. He and his horses will be much missed on the racecourses of Britain.

Iwent to the re-opening of Annabel's nightclub this week where Mark Birley and Annabel Goldsmith gave a dinner to show their friends the redecoration. Most of the guests — of whom not many were in the first flush of youth — were given excellent fare and were amusingly entertained by Dame Edna Everage, many of whose jokes were at the expense of those present — dukes with wandering eyes, newspaper proprietors and their politics, well-known industrialists with their large pensions and Chinese retailers with their social ambitions. Some of the pictures have been moved and the ceiling is a new colour, but everything else felt exactly the same. What a tribute to all involved that it has lasted as long as it has and now looks forward to a new lease of life under the management of our hosts' children.

The hot weather this week has brought a return of those who enjoy cooling off in the fountains of Trafalgar Square. When walking there earlier this week, I was approached by a young man, dripping wet, who asked me if I had noticed the brass plaque next to the statue of Charles I. Written on it was: 'This is the central point from where all distances to and from London are measured.' The man then took me to the statue of George Washington and told me that the soil on which the statue stands had been sent over especially from America. These two facts are new not only to me but also, I imagine, to many other Londoners.