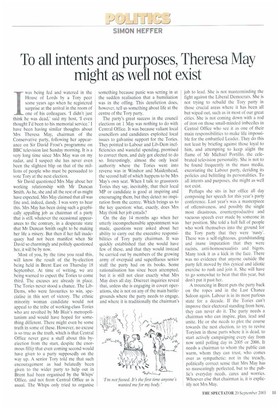 Page 11, 20 September 2003 — To all intents and purposes, Theresa May might as well not exist
Close

To all intents and purposes, Theresa May might as well not exist

Iwas being fed and watered in the House of Lords by a Tory peer some years ago when he registered surprise at the arrival in the room of one of his colleagues. 'I didn't just think he was dead,' said my host, 'I even thought I'd been to his memorial service.' I have been having similar thoughts about Mrs Theresa May, chairman of the Conservative party, following her appearance on Sir David Frost's programme on BBC television last Sunday morning. It is a very long time since Mrs May was on my radar, and I suspect she has never even been the slightest blip on that of the millions of people who must be persuaded to vote Tory at the next election.

Sir David questioned Mrs May about her working relationship with Mr Duncan Smith. As he, she and all the rest of us might have expected, Mrs May claimed that all was fine and, indeed, dandy. I was sorry to hear this. Mrs May has been doing such a graphically appalling job as chairman of a party that is still, whatever the occasional appearances to the contrary, in a desperate state that Mr Duncan Smith ought to be making her life a misery. But then if her full inadequacy had not been manifest when Sir David so charmingly and politely questioned her, it will be by now.

Most of you, by the time you read this, will know the result of the by-election being held in Brent East on Thursday 18 September. At time of writing, we are being warned to expect the Tories to come third. The excuses are already in place. The Tories never stood a chance. The LibDems, who were favourites to win, specialise in this sort of victory. The ethnic minority woman candidate would not appeal to the tribe of working-class Tories who are revolted by Mr Blair's metropolitanism and would have hoped for something different. There might even be some truth in some of these. However, no excuse is so true as the truth, which is that Central Office never gave a stuff about this byelection from the start, despite the enormous fillip that even coming second would have given to a party supposedly on the way up. A senior Tory told me that such encouragement as had belatedly been given to the wider party to help out in Brent had been organised by the Whips' Office, and not from Central Office as is usual. The Whips only tried to organise something because panic was setting in at the sudden realisation that a humiliation was in the offing. This dereliction does, however, tell us something about life at the centre of the Tory party.

The party's great success in the council elections on 1 May was nothing to do with Central Office. It was because valiant local councillors and candidates exploited local issues to galvanise support for the Tories. They pointed to Labour and Lib-Dem inefficiencies and wasteful spending, promised to correct them, and duly got elected to do so. Interestingly, almost the only local authority where the Tories went into reverse was in Windsor and Maidenhead, the second half of which happens to be Mrs May's own seat. When I talk to grassroots Tories they say, inevitably, that their local MP or candidate is good at inspiring and encouraging them, but they detect no inspiration from the centre. Which brings us to the key question: what, exactly, does Mrs May think her job entails?

On the day 14 months ago when her utterly incomprehensible appointment was made, questions were asked about her ability to carry out the executive responsibilities of Tory party chairman. It was quickly established that she would have few of these, and that they would instead be carried out by members of the growing army of overpaid and superfluous senior staff the party had on its books. Some rationalisation has since been attempted, but it is still not clear exactly what Mrs May does all day. Discreet inquiries reveal that, unless she is engaging in covert operations, she is not on any of the main battlegrounds where the party needs to engage, and where it is traditionally the chairman's job to lead. She is not masterminding the fight against the Liberal Democrats. She is not trying to rebuild the Tory party in those crucial areas where it has been all but wiped out, such as in most of our great cities. She is not coming down with a rod of iron on those small-minded imbeciles in Central Office who see it as one of their main responsibilities to make life impossible for the embattled Leader. They do this not least by briefing against those loyal to him, and attempting to keep alight the flame of Mr Michael Portillo, the celebrated television personality. She is not to be found frequently in the mass media, excoriating the Labour party, deriding its policies and belittling its personalities. To all intents and purposes, she might as well not exist.

Perhaps she sits in her office all day composing her speech for this year's party conference. Last year's was a masterpiece of offensiveness, and possibly the single most disastrous, counterproductive and vacuous speech ever made by someone in her position. She told a hall full of people who work themselves into the ground for the Tory party that they were 'nasty'. There was a self-righteous, grandstanding and inane imputation that they were racists, anti-homosexualists and bigots. Many took it as a kick in the face. There was no evidence that anyone outside the party felt moved by this cynical and idiotic exercise to rush and join it. She will have to go somewhat to beat that this year, but don't put it past her.

A trouncing in Brent puts the party back on the ropes and in the Last Chance Saloon again. Labour is in its most parlous state for a decade. If the Tories can't improve their electoral standing from here, they can never do it. The party needs a chairman who can inspire, plan, lead and unite. He or she needs to plot the course towards the next election, to try to revive Toryism in those parts where it is dead, to start actively campaigning every day from now until polling day in 2005 or 2006. It needs a chairman to whom the public can warm, whom they can trust, who comes over as sympathetic: not in the treacly, politically correct sense that Mrs May has so nauseatingly perfected, but to the public's everyday needs, cares and worries. Whoever else that chairman is, it is explicitly not Mrs May.