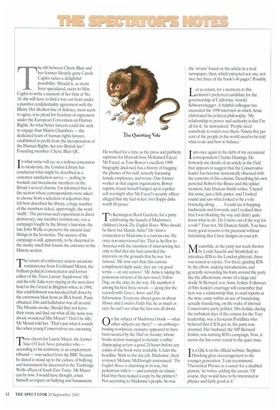 T he rift between Cherie Blair and her former lifestyle guru

Carole Caplin raises a delightful possibility. Should it, as many have speculated, occur to Miss Caplin to write a memoir of her time at No. 10, she will have to find a way out from under a punitive confidentiality agreement with the Blairs. Her likeliest line of defence, most seem to agree, is to plead for freedom of expression under the European Convention on Human Rights. So what better lawyers could she seek to engage than Matrix Chambers — the dedicated team of human-rights lawyers established to profit from the incorporation of the Human Rights Act into British law? Founding member: Cherie Blair QC.

In what some will see as a tedious concession to modernity, the London Library has conducted what might be described as a customer satisfaction survey — polling its bookish and tweedsome members on the library's several charms. I'm informed that in the section where correspondents were asked to choose from a selection of adjectives they felt best described the library, a huge number of the members ticked, approvingly, the word `stuffy'. The previous such experiment in direct democracy, one member reminds me, was a campaign fought by the library's historian, the late John Wells, to preserve the ancient lead fittings in the lavatories. The success of his campaign is still, apparently, to be discerned in the musky smell that haunts the entrance to the History section.

The return of conference season occasions reminiscence from Ferdinand Mount, the brilliant political commentator and former editor of the Times Literary Supplement. He and his wife Julia were staying at the next-door hotel to the Grand in Brighton when, in 1984, that establishment was knocked half down by the enormous blast from an IRA bomb. Panic obtained. Din and hullabaloo was all around. The Mounts awoke. Should they not leave their room and find out what all the noise was about, wondered Mrs Mount? 'Don't be silly,' Mr Mount told her. 'That's just what it sounds like when young Conservatives are carousing.'

rriree cheers for Laurie Mayer, the former 1 Nine O'Clock News presenter who — according to his testimony at an employment tribunal — was sacked from the BBC because he dared to stand up to the culture of bullying and harassment he discerned in the Tunbridge Wells offices of South East Today. Mr Mayer can by now, I would have thought, count himself an expert on bullying and harassment. He worked for a time as the press and publicity supremo for Harrods boss Mohamed Fayed. Mr Fayed, as Tom Bower's excellent 1998 biography disclosed, has a history of bugging the phones of his staff, sexually harassing female employees, and worse. One former worker at that august organisation, Bower reports, found herself banged up in a police cell overnight after Mr Fayed's security officer alleged that she had stolen 'two floppy disks worth 80 pence'.

To Kensington Roof Gardens, for a party celebrating the launch of Madonna's children's book The English Roses. Who should be there but Martin Amis? Mr Amis's connection to Madonna is a curious one. He once non-interviewed her. That is, he flew to America with the intention of interviewing her, only to find that she had cancelled the interview on the grounds that he was 'too famous'. He now says that, this curious compliment/slight aside, they are 'on good terms — at one remove'. Mr Antis is taking the poisonous reviews of his new novel, Yellow Dog, on the chin, by the way. He numbers it among his best three novels — along (for the record) with Time's ArrOW and The Information. Everyone always goes on about Money and London Fields but, he as much as says, he can't see what the fuss was all about.

On the subject of Madonna's book — what other subjects are there? — an embargobusting worldwide exclusive appeared to have been secured by the Mail on Sunday, whose books section managed to include a rather disparaging review a good 24 hours before any copies of the book were available. Under the headline 'Stick to the day job, Madonna', their reviewer Melanie McDonagh announced: 'The English Roses is charming in its way, but pedestrian with it — and certainly no classic.' Had they been leaked a copy by the printers? Not according to Madonna's people. So was

the 'review' based on the article in a rival newspaper, then, which extracted not one, not two, but three of the book's 46 pages? Possibly.

et usreturn, for a moment, to this

lumn's preferred candidate for the governorship of California: Arnold Schwarzenegger. A helpful colleague has excavated the 1990 interview in which Arnie elaborated his political philosophy. 'My relationship to power and authority is that I'm all for it,' he announced. 'People need somebody to watch over them. Ninety-five per cent of the people in the world need to be told what to do and how to behave.'

Jam once again in the debt of my occasional correspondent Charles Hastings. He forwards me details of an article in the Field that appears to suggest that the Conservative leader has become dementedly obsessed with the contents of this column. Describing his own personal Robert-the-Bruce-and-the-spider moment, lain Duncan Smith writes: 'I heard this noise, just a little patter, and I looked round and saw what looked to be a vole bouncing along. . . I could see it hopping backwards and forwards, and I realised then that I was blocking the way and didn't quite know what to do. Do I move out of the way for a vole?' Fear not, Mr Duncan Smith. You have many good reasons to be paranoid without fantasising that! have designs on your job.

Meanwhile. at the party last week thrown by Lords Saatchi and Strathclyde to introduce IDS to the London glitterati, there was reason to rejoice. For there, guiding IDS by the elbow, making introductions, and generally stewarding his form around the party like the affectionate owner of a large and docile St Bernard, was Anne Jenkin. Followers of Mrs Jenkin's marriage will remember that hers was a relationship that, to read reports at the time, came within an ace of foundering, actually foundering, on the rocks of internal Conservative party politics. Mrs Jenkin, during the turbulent days of the contest for the Tory leadership, was a ferocious Portillista who believed that if IDS got in, the party was doomed. Her husband, the MP Bernard Jenkin, was running IDS's campaign. Now, it seems she has come round to the quiet man.

In a Q&A on his official website, Stephen Hawking gives encouragement to the younger generation. 'I can recommend Theoretical Physics as a career for a disabled person,' he writes, adding the caveat: 'Of course, they would have to be interested in physics and fairly good at it.'