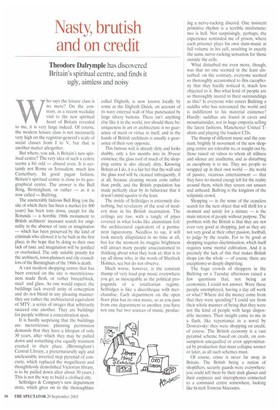 Nasty, brutish and on credit

lyvho says the leisure class is no more? On the contrary, as a recent weekday visit to the new spiritual heart of Britain revealed to me, it is very large indeed. Of course, the modern leisure class is not necessarily very high on the registrar-general's scale of social classes from I to V. but that is another matter altogether.

But where, you ask, is Britain's new spiritual centre? The very idea of such a centre seems a bit odd — absurd even. It is certainly not Rome or Jerusalem, much less Canterbury. In good pagan fashion. Britain's spiritual centre is close to its geographical centre. The answer is the Bull Ring, Birmingham, or rather — as it is now called — Bullring.

The unutterably hideous Bull Ring (on the site of which there has been a market for 800 years) has been torn down, except for the Rotunda — a horrible 1960s monument to British architects' incessant search for originality in the absence of taste or imagination — which has been preserved by the kind of criminals who allowed it to be built in the first place, in the hope that by doing so their own lack of taste and imagination will be justified or overlooked. The only suitable penalty for the architects, town-planners and city councillors of the Birmingham of the 1960s is death.

A vast modern shopping centre that has been erected on the site is meretriciousness made flesh, or rather breezeblock, steel and glass. As one would expect, the buildings lack overall unity of conception and do not blend in any pleasing manner: they are rather the architectural equivalent of MTV. a series of images that arbitrarily succeed one another. They are buildings for people without a concentration span.

It is hardly surprising that the buildings are meretricious: planning permission demands that they have a lifespan of only 30 years, after which they may be pulled down and something else equally transient erected in their place. (Birmingham's Central Library, a preternaturally ugly and uncleanable inverted step pyramid of concrete, which replaced the magnificent and thoughtlessly demolished Victorian library, is to be pulled down after about 30 years.) This is not the way to build a civilised city.

Selfridges & Company's new department store, which gives on to the thoroughfare called Digbeth, is now known locally by some as the Digbeth Dalek, on account of its wavy external wall of blue punctuated by large silvery buttons. There isn't anything else like it in the world, nor should there be; uniqueness in art or architecture is no guarantee of merit or virtue in itself, and in the hands of British architects is usually a guarantee of their very opposite.

This famous wall is already dirty and looks shabby, only a few months into its 30-year existence; the glass roof of much of the shopping centre is also already dirty. Knowing Britain as I do, it is a fair bet that the wall and the glass roof will be cleaned infrequently, if at all, because cleaning means costs rather than profit, and the British population has made perfectly clear by its behaviour that it doesn't mind squalor in the least.

The inside of Selfridges is extremely disturbing, but revelatory of the soul of modern man in his British incarnation. The ceilings are raw, with a tangle of pipes covered in what looks like aluminium foil: the architectural equivalent of a permanent laparotomy. Needless to say, it will look merely dilapidated in no time at all, but for the moment its magpie brightness will attract many people unaccustomed to thinking about what they look at; that is to say all those who, in the words of Sherlock Holmes, see but do not observe.

Much worse, however, is the constant thump of very loud pop music everywhere you go, as inescapable as the political propaganda of a totalitarian regime. Selfridges is like a discotheque with merchandise. Each department on the open floor plan has its own music, so as you pass from one department to another, you have not one but two sources of music, produc ing a nerve-racking discord. One insistent primitive rhythm is a terrible misfortune; two is hell. Not surprisingly, perhaps, the experience reminded me of prison, where each prisoner plays his own slum-music at full volume in his cell, resulting in exactly the same nerve-racking sensation for those outside the cells.

What disturbed me even more, though, was that no one seemed in the least disturbed: on the contrary, everyone seemed so thoroughly accustomed to this cacophony that they hardly noticed it, much less objected to it. But what kind of people are so thoroughly inured to their surroundings as this? Is everyone who enters Bullring a saddhu who has renounced the world and is indifferent to his material existence? Hardly: saddhus are found in caves and mountainsides, not in huge emporia selling the latest fashions, Manchester United Tshirts and playing the loudest CDs.

The thump of different music and the constant, brightly lit movement of the new shopping centre are tolerable to, or sought out by, those raised on videos to whom all stillness and silence are anathema, and as disturbing as cacophony is to me. They are people so wrapped up in their own world — the world of passive, vicarious entertainment — that they have no mental energy left for the reality around them, which they screen out unseen and unheard. Bullring is the kingdom of the solipsistic crowd.

Shopping — in the sense of the ceaseless search for the next object that will thrill for a moment and satisfy for a minute — is the main interest of people without purpose. The problem with the British is that they are not even very good at shopping, just as they are not very good at their other passion, football, to judge by the results. For to be good at shopping requires discrimination, which itself requires some mental cultivation. And it is precisely the lack of this that makes British shops (on the whole — of course, there are exceptions) so deeply dispiriting.

The huge crowds of shoppers in the Bullring on a Tuesday afternoon raised a few questions that, not being an economist, I could not answer. Were these people unemployed, having a day off work or what? Where did the money come from that they were spending? I could see from their whole manner of being that they were not the kind of people with large disposable incomes. Then insight came to me in a flash, like repentance in a novel by Dostoevsky: they were shopping on credit, of course. The British economy is a vast pyramid scheme based on credit, on consumption unequalled or even approximated by production that must collapse sooner or later, as all such schemes must.

Of course, crime is never far away in Britain. The British being a nation of shoplifters, security guards were everywhere: you could tell them by their dark glasses and their earpieces and microphones connected to a command centre somewhere, looking like hi-tech Tontons Macoutes.