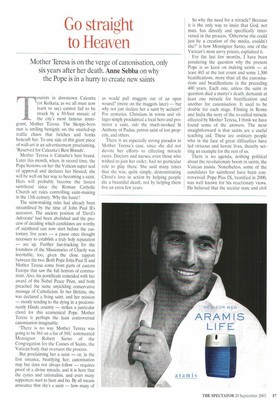 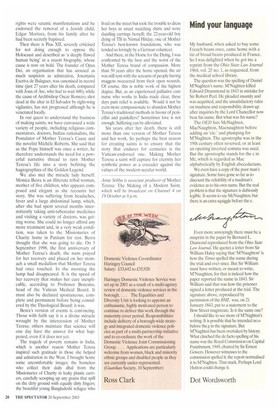 Mother Teresa is on the verge of canonisation, only six years after her death. Anne Sebba on why the Pope is in a hurry to create new saints Tourists in downtown Calcutta (or Kolkata, as we all must now learn to say) cannot fail to be struck by a 50-foot mosaic of the city's most famous immigrant, Mother Teresa. The Skopje-born nun is smiling benignly on the snarled-up traffic chaos that belches and honks beneath her. To one side of this giant piece of wall-art is an advertisement proclaiming, 'Reserved for Calcutta's Best Brands'.

Mother Teresa is Calcutta's best brand. Later this month, when, in record time, the Pope bestows on her the Vatican super seal of approval and declares her blessed, she will be well on her way to becoming a saint. Hers will probably become the fastest sainthood since the Roman Catholic Church set rules controlling saint-making in the 13th century. Why the haste?

The saint-making rules had already been streamlined by the time of John Paul II's accession. The ancient position of 'Devil's Advocate' had been abolished and the process of deciding which candidates are worthy of sainthood can now start before the customary five years — a pause once thought necessary to establish a truly holy reputation — are up. Further fast-tracking for the foundress of the Missionaries of Charity was inevitable, too, given the close rapport between the two. Both Pope John Paul II and Mother Teresa come from parts of eastern Europe that saw the full horrors of communism. Also, his pontificate coincided with her award of the Nobel Peace Prize, and both preached the same unyielding conservative message of Catholicism. In her lifetime, she was declared a living saint, and her mission — mostly tending to the dying in a predominantly Hindu country — strikes a particular chord for this ecumenical Pope. Mother Teresa is perhaps the least controversial canonisation imaginable.

'There is no way Mother Teresa was going to be 361 on a list of 360,' commented Monsignor Robert Sarno of the Congregation for the Causes of Saints. the Vatican body that oversees the process.

But proclaiming her a saint — or, in the first instance, beatifying her; canonisation may but does not always follow — requires proof of a divine miracle, and it is here that the cynics and rationalists, and even many supporters start to hum and ho. By all means announce that she's a saint — how many of

us would pull maggots out of an open wound? (more on the maggots later) — but why not just declare her a saint by acclaim? For centuries, Christians in towns and villages simply proclaimed a local hero and protector a saint, vide the much-invoked St Anthony of Padua, patron saint of lost property, and others.

There is an especially strong paradox in Mother Teresa's case, since she did not devote her efforts to effecting miracle cures. Doctors and nurses, even those who wished to join her order, had no particular role to play there. She said many times that she was, quite simply, demonstrating Christ's love in action by helping people die a beautiful death, not by helping them live an extra few years. So why the need for a miracle? Because it is the only way to insist that God, not man, has directly and specifically intervened in the process. 'Otherwise she could just be a creation of the media, couldn't she?' is how Monsignor Sarno, one of the Vatican's most savvy priests, explained it.

For the last few months, I have been pondering the question why the present Pope is so keen on making saints — at least 465 at the last count and some 1,300 beatifications, more than all the canonisations and beatifications in the preceding 400 years. Each one, unless the saint in question died a martyr's death, demands at least one miracle for beatification and another for canonisation. It used to be double for each stage. Filming in Rome and India the story of the so-called miracle effected by Mother Teresa, I think we have found some of the answers. The most straightforward is that saints are a useful teaching aid, These are ordinary people who in the face of great difficulties have led virtuous and heroic lives, thereby setting an example for the rest of us.

There is no agenda, nothing political about the revolutionary boom in saints, the Vatican insists. Nonetheless, some of the candidates for sainthood have been controversial: Pope Pius IX, beatified in 2000, was well known for his reactionary views. He believed that the secular state and civil rights were satanic manifestations and he endorsed the removal of a Jewish child, Edgar Mortara, from his family after he had been secretly baptised.

Then there is Pius XII, severely criticised for not doing enough to oppose the Holocaust and described as 'a deeply flawed human being' in a recent biography, whose cause is now on hold. The founder of Opus Del, an organisation that has aroused as much suspicion as admiration, Josemaria Escriva de Balaguer, was canonised in record time (just 27 years after his death, compared with Joan of Arc, who had to wait 600), while the cause of Archbishop Oscar Romero, shot dead at the altar in El Salvador by right-wing vigilantes, has not progressed although he is venerated locally.

In our quest to understand the business of making saints, we have canvassed a wide variety of people, including religious commentators, doctors, Indian rationalists, the Postulator of Mother Teresa's Cause and the novelist Michele Roberts. She said that as the Pope himself was once a writer, he therefore understands the need for a powerful narrative thread to turn Mother Teresa's life into a story befitting the hagiographies of the Golden Legend.

We also met the miracle lady herself. Monica Besra is an illiterate tribal woman, mother of five children, who appears composed and elegant as she recounts her story. She was suffering from headaches, fever and a large abdominal lump, which, after she had spent several months intermittently taking anti-tubercular medicines and visiting a variety of doctors, was getting worse. She could no longer afford any more treatment and, in a very weak condition, was taken to the Missionaries of Charity home in Patiram for rest. Besra thought that she was going to die. On 5 September 1998, the first anniversary of Mother Teresa's death, the nuns prayed for her recovery and placed on her stomach a small medallion that Mother Teresa had once touched. In the morning the lump had disappeared. It is the speed of her recovery that makes her cure inexplicable, according to Professor Bonomo, head of the Vatican Medical Board. It must also be declared spontaneous, complete and permanent before being considered by the Theological Board: it was.

Besra's version of events is convincing. Those with faith say it is a divine miracle wrought by the intercession of Mother Teresa; others maintain that science will one clay have the answer for what happened, even if it does not yet.

The tragedy of poverty remains in India, which is another reason Mother Teresa inspired such gratitude in those she helped and admiration in the West I brought home some uncomfortable images: the homeless who collect their daily clhal from the Missionaries of Charity in leaky plastic carriers, carefully scooping up any grains that spill on the dirty ground with equally dirty fingers; the beautiful young Bangladeshi refugee who

lived on the street but took the trouble to dress her boys in smart matching shirts and wore darding earrings herself; the 22-year-old boy dying of TB in Nirrnal Hriday, one of Mother Teresa's best-known foundations, who was tended so lovingly by a German volunteer.

And there, in the Home for the Dying, I was confronted by the best and the worst of the Mother Teresa brand of compassion. More than 50 years after the home opened, the air was still rent with the screams of people having maggots tweezered from their open wounds. Of course, this is noble work of the highest degree. But, as an experienced palliative care nurse who works in India made clear, these days pain relief is available. Would it not be even more compassionate to abandon Mother Teresa's traditional methods in favour of penicillin and painkillers? Sometimes love is not enough. Suffering can be alleviated.

Six years after her death, there is still more than one version of Mother Teresa and her work. So perhaps the best reason for creating saints is to ensure that the story that endures for centuries is the Vatican-endorsed one. Making Mother Teresa a saint will capture for eternity her symbolic power as a crusader against the values of the modern secular world.

Anne Sebba is associate producer of Mother Teresa: The Making of a Modern Saint, which will be broadcast on Channel 4 on 19 October at 8 p.m.