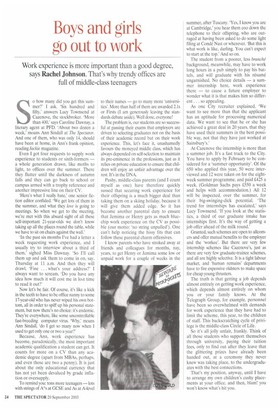 go out to work Work experience is more important than a good degree, says Rachel Johnson. That's why trendy offices are full of middle-class teenagers So how many did you get this summer?' I ask. 'Six hundred and fifty,' answers Lucy Townsend at Cazenove, the stockbroker. 'More than 400,' says Caroline Dawnay, a literary agent at PFD. 'About two dozen a week,' moans Ann Sindall at The Spectator. And one of them, who was only 14, should have been at home, in Ann's frank opinion, reading Jackie magazine.

Even I got four requests to supply work experience to students or sixth-formers — a whole generation drawn, like moths to light, to offices over the summer. There they flutter until the darkness of autumn falls and they can go back to school or campus armed with a trophy reference and another impressive line on their CV.

'Here's what I really hate,' one senior fiction editor confided. 'We get lots of them in the summer, and what they love is going to meetings. So when we get to the meeting, we're met with this absurd sight of all these self-important 21-year-olds we don't know taking up all the places round the table, while we have to sit on chairs against the wall.'

'In the past six months I've had a letter a week requesting work experience, and I usually try to interview about a third of them,' sighed Miss Dawnay. 'So I'll call them up and ask them to come in on, say, Thursday at 11 a.m. And then they will drawl, 'Fine . . . what's your address?' I always want to scream. 'Do you have any idea how much it will cost me in lost time to read it out?'

Now let's be fair. Of course, it's like a kick in the teeth to have to be office nanny to some 17-year-old who has never wiped his own bottom, all in order to spiff up his personal statement, but now there's no choice: it's endemic. They're everywhere, like some uncontrollable fast-breeding computer virus. 'Why,' moans Ann Sindall, 'do I get so many now when I used to get only one or two a year?'

Because, Ann, work experience has become, paradoxically, the most important academic qualification a student can get. It counts for more on a CV than any academic degree (apart from MBAs, perhaps, and even those are two a penny). It is just about the only educational currency that has not yet been devalued by grade inflation or oversupply.

To remind you: tons more teenagers — lots with strings of A*s at GCSE and As at A-level to their names — go to many more 'universities'. More than half of them are awarded 2.1s or Firsts (I am generously leaving the standards debate aside). Well done, everyone!

The problem is, our students are so successful at passing their exams that employers are driven to selecting graduates not on the basis of their academic record but on their work experience. This, let's face it, unashamedly favours the moneyed middle class, which has always depended on self-selection to maintain its pre-eminence in the professions, just as it relies on private education to ensure that children will enjoy an unfair advantage over the rest, It's in the DNA.

Pushy, middle-class parents (and I count myself as one) have therefore quickly sussed that securing work experience for their offspring is a much bigger deal than taking them on a skiing holiday, because it will give them added edge. So it has become another parental duty to ensure that Jemima or Henry gets as much bluechip work experience on the CV as possible (our motto: `no string unpulled'). One can't help noticing the hissy fits that can follow these parental charm offensives.

I know parents who have stroked away at friends and colleagues for months, nay, years, to get Henry or Jemima some low or unpaid work for a couple of weeks in the summer, after Tuscany. 'Yes, I know you are at Cambridge,' you hear them coo down the telephone to their offspring, who are outraged at having been asked to do some light filing at Conde Nast or wherever. 'But this is what work is like, darling. You can't expect to start at the top.' And so on.

The student from a poorer, less branche background, meanwhile, may have to work long hours in a pub simply to pay his battels, and will graduate with his resume ungarnished. No choice details — a summer internship here, work experience there — to cause a future employer to wonder what it is that makes him so different . . . so appealing.

As one City recruiter explained, 'We want to see more than that the applicant has an aptitude for processing numerical data. We want to see that he or she has achieved a great deal in 20 years, that they have used their summers in the best possible way, not that they have just worked at Sainsbury's.'

At Cazenove the internship is more than a summer job. It's a fast track to the City. You have to apply by February to be considered for a 'summer opportunity'. Of the 650 who applied this year, 50 were interviewed and 12 were taken on for the eightweek summer programme, and paid £425 a week. (Goldman Sachs pays L550 a week and helps with accommodation.) All 12 will be inspected, over the summer, for their big-swinging-dick potential. 'The trend for internships has escalated,' says Lucy Townsend. 'If you look at the statistics, a third of our graduate intake has internships first. It's the way of getting a job offer ahead of the milk round.'

Granted, such schemes are open to allcomers and offer mutual benefits to the employer and the -workee'. But there are very few internship schemes like Cazenove's, just as there are very few graduate-trainee schemes, and all are highly selective. It is a tight labour market, and 'human remains' departments have to fire expensive oldsters to make space for cheap young thrusters.

The truth is that getting a job depends almost entirely on getting work experience, which depends almost entirely on whom you or your family knows. At the Telegraph Group, for example, personnel have been so overwhelmed with demands for work experience that they have had to limit the scheme, this year, to the children of staff. This backscratching cycle of privilege is the middle-class Circle of Life.

So it's all jolly unfair, frankly. Think of all those students who support themselves through university, paying their tuition fees, only to find out after they leave that the glittering prizes have already been handed out, at a ceremony they never knew was taking place, to the undergraduates with the best connections.

That's my position, anyway, until I have to arrange my own children's cushy placements at your office, and then, blam! you won't know what's hit you.