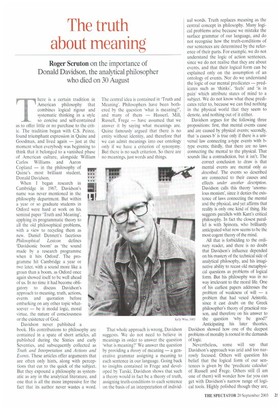 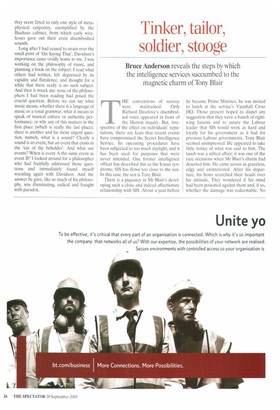 The truth about meaning

Roger Scruton on the importance of Donald Davidson, the analytical philosopher who died on 30 August

There is a certain tradition in American philosophy that combines logical rigour and systematic thinking in a style so concise and self-contained as to offer little or no purchase to the critic. The tradition began with C.S. Peirce, found triumphant expression in Quine and Goodman, and lived again — just at the moment when everybody was beginning to think that it belonged to a vanished phase of American culture, alongside William Carlos Williams and Aaron Copland — in the philosophy of Quine's most brilliant student, Donald Davidson.

When I began research in Cambridge in 1967, Davidson's name was never mentioned in the philosophy department. But within a year or so graduate students in Oxford were bard at work on his seminal paper 'Truth and Meaning', applying its programmatic theory to all the old philosophical problems, with a view to recycling them as new. Daniel Dennett's facetious Philosophical Lexicon defines `Davidsonic boom' as 'the sound made by a research programme when it hits Oxford'. The programme hit Cambridge a year or two later, with a sound more like a groan than a boom, as Oxford once again showed itself to be well ahead of us. In no time it had become obligatory to discuss Davidson's approach to meaning, truth, actions, events and quotation before embarking on any other topic whatsoever — be it modal logic, moral virtue, the nature of consciousness or the existence of God.

Davidson never published a book. His contributions to philosophy are contained in a spate of short articles, all published during the Sixties and early Seventies, and subsequently collected as Truth and Interpretation and Actions and Events. These articles offer arguments that are often only hints, along with perceptions that cut to the quick of the subject. But they expound a philosophy as systematic as any in the analytical literature, and one that is all the more impressive for the fact that its author never wastes a word.

The central idea is contained in 'Truth and Meaning'. Philosophers have been bothered by the question 'what is meaning?', and many of them — Husserl, Mill, Russell, Frege — have assumed that we answer it by saying what meanings are. Quine famously argued that there is no entity without identity, and therefore that we can admit meanings into our ontology only if we have a criterion of synonymy. But there is no such criterion. So there are no meanings, just words and things.

That whole approach is wrong, Davidson suggests. We do not need to believe in meanings in order to answer the question 'what is meaning?' We answer the question by providing a theory of meaning — a generative grammar assigning a meaning to each sentence in our language. Going back to insights contained in Frege and developed by Tarski, Davidson shows that such a theory would in fact be a theory of truth, assigning truth-conditions to each sentence on the basis of an interpretation of individ

ual words. Truth replaces meaning as the central concept in philosophy. Many logical problems arise because we mistake the surface grammar of our language, and do not recognise how the truth-conditions of our sentences are determined by the reference of their parts. For example, we do not understand the logic of action sentences, since we do not realise that they are about events, and that their logical form can be explained only on the assumption of an ontology of events. Nor do we understand the logic of our mental predicates — predicates such as 'thinks', 'feels' and 'is in pain' which attribute states of mind to a subject. We do not know what these predicates refer to, because we can find nothing in the physical world that they seem to denote, and nothing out of it either.

Davidson argues for the following three propositions: first, that mental events cause and are caused by physical events; secondly, that 'a causes b' is true only if there is a universal law connecting a-type events with btype events; thirdly, that there are no laws connecting the mental to the physical. That sounds like a contradiction, but it isn't. The correct conclusion to draw is that mental events are mental only as described. The events so described are connected to their causes and effects under another description. Davidson calls this theory 'anomalous monism', since it denies the existence of laws connecting the mental and the physical, and yet affirms that reality is only one kind of thing. He suggests parallels with Kant's critical philosophy. In fact the closest parallel is with Spinoza, who brilliantly anticipated what now seems to be the most cogent theory of the mind.

All that is forbidding to the ordinary reader, and there is no doubt that Davidson's influence depended on his mastery of the technical side of analytical philosophy, and his imaginative ability to recast old metaphysical questions as problems of logical form. But his philosophy was in no way irrelevant to the moral life. One of his earliest papers addresses the problem of weakness of will — a problem that had vexed Aristotle, since it cast doubt on the Greek philosopher's theory of practical reason, and therefore on his answer to the question 'why be good?' Anticipating his later theories, Davidson showed how one of the deepest problems of morality is rooted in the demands of logic.

Nevertheless, some will say that Davidson's approach was arid and too narrowly focused. Others will question his belief that the logical form of our sentences is given by the 'predicate calculus' of Russell and Frege. Others still (I am one of them) will wonder how far you can get with Davidson's narrow range of logical tools. Highly polished though they are, they seem fitted to only one style of metaphysical carpentry, exemplified by the Bauhaus cabinet, from which early wirelesses gave out their eerie disembodied sounds.

Long after I had ceased to strain over the small print of 'On Saying That', Davidson's importance came vividly home to me. I was working on the philosophy of music, and planning a book on the subject. I read what others had written, felt depressed by its vapidity and flatulence, and thought for a while that there really is no such subject. And then it struck me: none of the philosophers I had been reading had posed the crucial question. Before we can say what music means, whether there is a language of music or a tonal grammar, what it means to speak of musical culture or authentic performance, or why any of this matters in the first place (which is really the last place), there is another and far more urgent question, namely, what is a sound? Clearly a sound is an event, but an event that exists in the "ear of the beholder'. And what are events? When is event A the same event as event B? I looked around for a philosopher who had fruitfully addressed those questions and immediately found myself wrestling again with Davidson. And the answer he gave, like so much of his philosophy, was illuminating, radical and fraught with paradox.