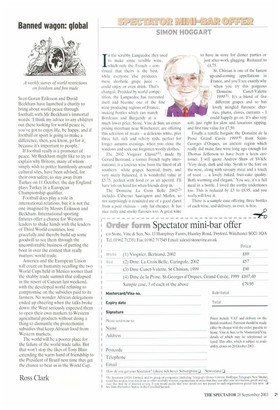 Sven Goran Eriksson and David Beckham have launched a charity to bring about world peace through football, with Mr Beckham's immortal words: 'I think my advice to any children Out there looking for world peace is, you've got to enjoy life, be happy, and if football or sport is going to make a difference, then, you know, go for it, because it's important to people,' If football really is a promoter of peace, Mr Beckham might like to try to explain why Britons, many of whom simply wish to potter harmlessly around cultural sites, have been advised, for their own safety, to stay away from Turkey on 11 October, the day England plays Turkey in a European Championship qualifier. Football does play a role in international relations, but it is not the one imagined by Messrs Eriksson and Beckham. International sporting fixtures offer a chance for Western leaders to shake hands with the leaders of Third World countries, lose gracefully and thereby build up some goodwill to see them through the uncomfortable business of putting the boot in over the contest that really matters: world trade. America and the European Union will count on humanity recalling the two World Cups held in Mexico sooner than the shabby trade summit that collapsed in the resort of Cancun last weekend, with the developed world refusing to compromise on the subsidies paid to its farmers. No wonder African delegations ended up cheering when the talks broke down: the West seriously expected them to open their own markets to Western agricultural products without doing a thing to dismantle the protectionist subsidies that keep African food from Western markets. The world will be a poorer place for the failure of the world trade talks. But that won't stop the likes of Tony Blair extending the warm hand of friendship to the President of Brazil next time they get the chance to beat us in the World Cup.