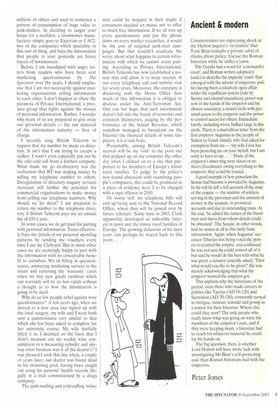 Commentators are expressing shock at the Hutton inquiry's 'revelation' that Tony Blair consults a private cabal of chums about policy. Excuse the Roman historian while he stifles a yawn.

The Greeks had a word for 'a monarch's court', and Roman writers adopted it (aula) to describe the imperial 'court' that emerged with the advent of emperors: politics having been a relatively open affair under the republican system (rule by Senate and elected executives), power was now in the hands of the emperor and his chosen associates, a closed circle with personal access to the emperor and the power to control access for others. Immediate family, including wives, bulked large in this circle. There is a marvellous letter from the first emperor Augustus to the people of Samos (a Greek island), who had asked for exemption from tax — 'my wife Livia has been pestering me on your behalf, but I am sorry to have to say. . . '• Many of the emperor's inner ring were slaves or exslaves (freedmen); owing everything to the emperor, they could be trusted.

A good example of how powerless the Senate had become is provided by Augustus. In his will he left a full account of the state of the empire — the number of soldiers serving in the provinces and the amount of money in the treasury, in provincial accounts and due in outstanding taxes. At the end, 'he added the names of the freedmen and slaves from whom details could be obtained'. The Senate, in other words, had no access at all to this fairly basic information. Again, when Augustus' successor Tiberius was being voted the powers to control the empire, and confessed he was not sure he could control all of it but said he would do his best with what he was given, a senator cynically asked, 'Then what would you like to be given?' He was merely acknowledging that what the emperor wanted the emperor got.

This explains why the historians of the period, even those who made careers in politics like Tacitus (AD 56-120) and Suetonius (AD 70-130), constantly turned to intrigue, rumour, scandal and gossip as a source for their histories. Where else could they turn? The only people who really knew what was going on were the members of the emperor's au/a, and if they were keeping mum, a historian had to reach for whatever material he could lay his hands on.

The big question, then, is whether Lord Hutton will have more luck with investigating Mr Blair's self-protecting aula than Roman historians had with the emperors.