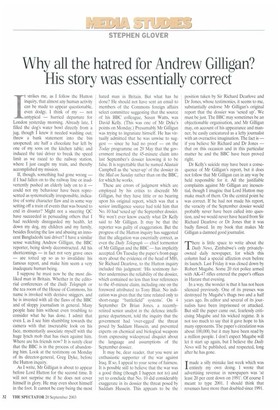 Why all the hatred for Andrew Gilligan?

His story was essentially correct

It strikes me. as I follow the Hutton inquiry, that almost any human activity can be made to appear questionable, even dodgy. I think of my — not untypical — hurried departure for London yesterday morning. Already late, I filled the dog's water bowl directly from a jug. though I knew it needed washing out; threw a bank statement into the bin unopened; ate half a chocolate bar left by one of my sons on the kitchen table; and induced the taxi driver to break the speed limit as we raced to the railway station, where I just caught my train, and thereby accomplished my mission.

If, though, something had gone wrong — if I had fallen on to the railway line or inadvertently pushed an elderly lady on to it — could not my behaviour have been represented as systematically irresponsible, indicative of some character flaw and in some way setting off a train of events that was bound to end in disaster? Might not a sneering QC have succeeded in persuading others that I had recklessly disregarded my health, let down my dog, my children and my family, besides flouting the law and abusing an innocent Bangladeshi taxi driver? I have a similar sense watching Andrew Gilligan, the BBC reporter, being slowly deconstructed. All his shortcomings — in fact not very grave ones — are totted up so as to invalidate his famous report, and make him seem a very inadequate human being.

I suppose he must now be the most disliked man in Britain. Whether in the editorial conferences of the Daily Telegraph or the tea room of the House of Commons, his name is invoked with derisive sniggers, and he is invested with all the flaws of the BBC and of sloppy journalism in general. Many people hate him without even troubling to consider what he has done. I admit that even I, as I see him shambling towards the camera with that inscrutable look on his face, momentarily associate myself with the huge lynch mob that has risen against him. Where are his friends now? It is surely clear that the BBC is in the process of abandoning him. Look at the testimony on Monday of its director-general, Greg Dyke, before the Hutton inquiry.

As I write, Mr Gilligan is about to appear before Lord Hutton for the second time. It will not surprise me if he does not cover himself in glory. He may even shoot himself in the foot. It cannot be easy being the most

hated man in Britain. But what has he done? He should not have sent an email to members of the Commons foreign affairs select committee suggesting that the source of his BBC colleague, Susan Watts, was David Kelly. (This was one of Mr Dyke's points on Monday.) Presumably Mr Gilligan was trying to ingratiate himself. He has virtually admitted that he was unwise to suggest — since he had no proof — on the Today programme on 29 May that the government inserted the 45-minute claim into last September's dossier knowing it to be false. It is regrettable that he named Alastair Campbell as the `sexer-up" of the dossier in the Mail on Sunday rather than on the BBC, for which he works.

These are errors of judgment which are employed by his critics to discredit Mr Gilligan, but they have little or no bearing upon his original report, which was that a senior intelligence source had told him that No. 10 had 'sexed up' the September dossier. We won't ever know exactly what Dr Kelly said to Mr Gilligan. It may be that the reporter was guilty of exaggeration. But the progress of the Hutton inquiry has suggested that the allegation was essentially correct, as even the Daily Telegraph — chief tormentor of Mr Gilligan and the BBC — has implicitly accepted. On Tuesday the paper's front-page story about the evidence of the head of MI6, Sir Richard Dearlove, to the Hutton inquiry included this judgment: 'His testimony further undermines the reliability of the dossier, which contained no less than four references to the 45-minute claim, including one on the foreword attributed to Tony Blair. No indication was given that the time related only to short-range "battlefield" systems'. On 4 September Dr Brian Jones, a recentlyretired senior analyst in the defence intelligence department, told the inquiry that the government had 'over-egged' the threat posed by Saddam Hussein, and prevented experts on chemical and biological weapons from expressing widespread disquiet about the language and assumptions of the September dossier.

It may be, dear reader, that you were an enthusiastic supporter of the war against Iraq. If so, I appeal to your sense of fairness. It is possible still to believe that the war was a good thing (though I happen not to) and yet to conclude that No. 10 did considerably exaggerate in its dossier the threat posed by Saddam Hussein. This appears to be the position taken by Sir Richard Dearlove and Dr Jones, whose testimonies, it seems to me, substantially endorse Mr Gilligan's original report that the dossier was 'sexed up'. We must be just. The BBC may sometimes be an objectionable organisation, and Mr Gilligan may, on account of his appearance and manner, be easily caricatured as a lefty journalist with an overactive imagination. The fact is — if you believe Sir Richard and Dr Jones — that on this occasion and in this particular matter he and the BBC have been proved right.

Dr Kelly's suicide may have been a consequence of Mr Gilligan's report, but it does not follow that Mr Gilligan can in any way be held responsible for it. All the justifiable complaints against Mr Gilligan are inessential, though I imagine that Lord Hutton may make much of them. On the central point he was correct. If he had not made his report, the veracity of the September dossier would probably never have been called into question, and we would never have heard from Sir Richard Dearlove or Dr Jones that it was badly flawed. In my book that makes Mr Gilligan a damned good journalist.

There is little space to write about the Daily News, Zimbabwe's only privatelyowned daily newspaper, for which this column had a special affection even before its launch. Last Friday it was closed down by Robert Mugabe. Some 20 riot police armed with AK-47 rifles entered the paper's offices in Harare that evening.

In a way, the wonder is that it has not been silenced previously. One of its presses was destroyed by Mugabe's thugs two and a half years ago. Its editor and several of its journalists have been imprisoned or attacked. But still the paper came out, fearlessly criticising Mugabe and his wicked regime. It is not too much to say that it gave hope to his many opponents. The paper's circulation was about 100,000, but it may have been read by a million people. I don't expect Mugabe will let it start up again, but I believe the Daily News will be published, and respected, long after he has gone.

T made a silly mistake last week which was 1 entirely my own doing. I wrote that advertising revenue in newspapers was 'at least 20 per cent down on 1991'. Of course I meant to type 2001. I should think that revenues have more than doubled since 1991.