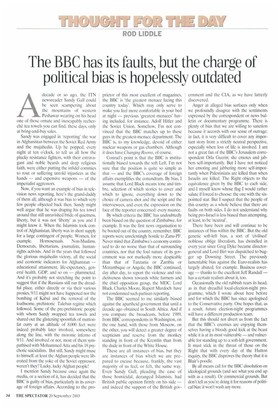 Page 34, 20 September 2003 — The BBC has its faults, but the charge of political bias is hopelessly outdated
Close

The BBC has its faults, but the charge of political bias is hopelessly outdated

Adecade or so ago, the ITN newsreader Sandy Gall could be seen scampering about the mountains of western Peshawar wearing on his head one of those ornate and inescapably recherché tea towels you can find, these days, only at bring-and-buy sales.

Sandy was engaged in 'reporting' the war in Afghanistan between the Soviet Red Army and the mujahedin. Up he popped, every night at ten o'clock, to tell us all how the plucky resistance fighters, with their extravagant and noble beards and deep religious faith, were either putting the infidel commies to rout or suffering untold injustices at the hands — and expensive weapons — of the imperialist aggressors.

Now, if you want an example of bias in television news reporting, here's the grand-daddy of them all; although it was bias to which very few people objected back then. Sandy might well argue that he was draping his tea towel around that still unravished bride of quietness, liberty, but it was not 'liberty' as you and I might know it. When the Islamists took control of Afghanistan, liberty was in short supply for a large contingent of people. Women, for example. Homosexuals. Non-Muslims. Democrats, libertarians, journalists, humanrights activists. And in the years that followed the glorious mujahedin victory, all the social and economic indicators for Afghanistan — educational attainment, life-expectancy, general health, GDP, and so on — plummeted. And it's probably not stretching the point to suggest that if the Russians still ran the dreadful place, either directly or via their various proxies, 9/11 might not have happened nor the bombing of Kabul and the removal of the loathsome, prehistoric Taleban regime which followed. Some of the pre-prehistoric people with whom Sandy swapped tea towels and shared out the glistening spoonfuls of muttonfat curry at an altitude of 8,000 feet were indeed probably later involved, somewhere along the line, with the moronic inferno of 9/11. And involved or not, most of them sympathised with Mohammed Ada and his 18 psychotic suicidalists. But still, Sandy might muse to himself, at least the Afghan people were liberated from the yoke of the Soviet oppressor, weren't they? Lucky, lucky Afghan people!

I mention Sandy because once again the media, or a section of it, has decided that the BBC is guilty of bias, particularly in its coverage of foreign affairs. According to the pro

prietor of this most excellent of magazines, the BBC is 'the greatest menace facing this country today'. Which may only serve to make you feel more comfortable in your bed at night — previous 'greatest menaces' having included, for instance, Adolf Hitler and the Soviet Union. Somehow, I'm not convinced that the BBC matches up to these guys in the greatest-menace department. The BBC is, to my knowledge, devoid of either nuclear weapons or gas chambers. Although it does have Changing Rooms, of course.

Conrad's point is that the BBC is institutionally biased towards the soft Left. I'm not sure that the position is quite so simple as that — and the BBC's coverage of foreign affairs exemplifies the conundrum. By bias, I assume that Lord Black means tone and timbre, selection of which stories to cover and which to ignore, everything down to the choice of camera shot and the script and the interviewees, and even the expression on the face of the reporter concerned: every nuance.

By which criteria the BBC has undoubtedly been biased on the question of Zimbabwe, for example. It was the first news organisation to be booted out of the country, remember. BBC reports were unrelentingly hostile to Zanu-PF. Never mind that Zimbabwe's economy continued to do no worse than that of surrounding countries, nor that the foul nature of its government was not markedly more despicable than that of Tanzania or Zambia or Mozambique or Angola; the BBC continued, day after day, to report the violence and vindictiveness shown towards white farmers and the chief opposition group, the MDC. Lord Black, Charles Moore, Rupert Murdoch have not condemned such partisan reporting.

The BBC seemed to me similarly biased against the apartheid government that until a decade ago obtained in South Africa. And if you compare the broadcasts, before 1989, from BBC correspondents in Washington, on the one hand, with those from Moscow, on the other, you will detect a greater degree of scepticism and reserve from the monkey standing in front of the Kremlin than from the dude in front of the White House.

These are all instances of bias, but they are instances of bias which we are prepared to excuse because, frankly, the vast majority of us feel, or felt, the same way. Even Sandy Gall, pleading the case of those homicidal, deranged Islamists. had British public opinion firmly on his side — and indeed the support of the British gov

ernment and the CIA. as we have latterly discovered.

Anger at alleged bias surfaces only when we profoundly disagree with the sentiments expressed by the correspondent or news bulletin or documentary programme. There is plenty of bias that we are willing to sanction because it accords with our sense of outrage; in fact, it is very difficult to cover any important story from a strictly neutral perspective, especially when loss of life is involved. I am not a great fan of the BBC's Jerusalem correspondent Orla Guerin; she emotes and jabbers self-importantly. But I have not noticed her emoting and jabbering more self-importantly when Palestinians are killed than when Israelis are killed. The Right objects to the equivalence given by the BBC to each side, and I myself know whose flag I would rather salute if forced to choose: the one with the sixpointed star. But I suspect that the people of this country as a whole believe that there are faults on both sides. I do not understand why being pro-Israel is less biased than attempting, at least, to be 'neutral'.

There have been and will continue to be instances of bias within the BBC, But the old generic soft-left bias, a sort of 'civilised' noblesse oblige liberalism, has dwindled in every year since Greg Dyke became directorgeneral and Lord Birt was dispatched to bugger up Downing Street. The previously lamentable bias against the Euro-realists has largely abated, for example. Business coverage — thanks to the excellent Jeff Randall — has a certain realism about it, too.

But this should not divert us from the fact that the BBC's enemies are enjoying themseives having a bloody good kick at the beast while it is at its most vulnerable — and vulnerable for standing up to a soft-left government. It must stick in the throat of those on the Right that with every day of the Hutton inquiry. the BBC disproves the theory that it is Blair's poodle.

By all means call for the BBC dissolution on ideological grounds (and see what you end up with as a result). Or commercial grounds. But don't tell us you're doing it for reasons of political bias: it won't wash any more.