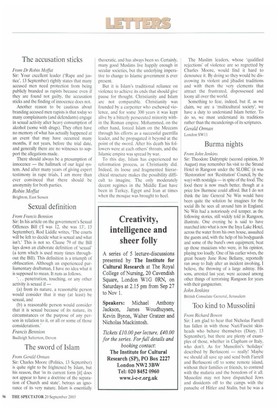 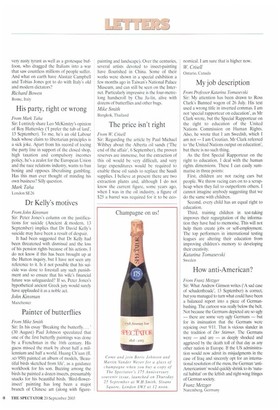 Too kind to Mussolini

Sir: I am glad to hear that Nicholas Farrell has fallen in with those Nazi/Fascist skinheads who behave themselves (Diary, 13 September), but there are plenty of examples of those, whether in Clapham or Italy, who don't. As for Mussolini's -holidays' described by Berlusconi — really! Maybe we should all save up and send both Farrell and Berlusconi off to some remote island, without their families or friends, to contend with the malaria and the boredom of it all. Mussolini may not have dispatched Jews and dissidents off to the camps with the panache of Hitler and Stalin, but he was a

very nasty tyrant as well as a grotesque buffoon, who dragged the Italians into a war that saw countless millions of people suffer. And what on earth have Alastair Campbell and Tobias Jones got to do with Italy's old and modern dictators?