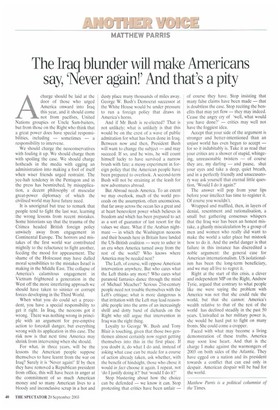 The Iraq blunder will make Americans say, 'Never again!' And that's a pity

Acharge should be laid at the door of those who urged America onward into Iraq this year, and it should come not from pacifists, United Nations groupies or Uncle Sam-baiters, but from those on the Right who think that a great power does have special responsibilities, including — sometimes — a responsibility to intervene.

We should charge the neoconservatives with fouling it up. We should charge them with spoiling the case. We should charge hotheads in the media with egging an administration into making a fool of itself when wiser friends urged restraint. The yee-hah tendency in the Pentagon and in the press has besmirched, by misapplication, a decent philosophy of muscular great-power diplomacy of which the civilised world may have future need.

It is unoriginal but true to remark that people tend to fight the last war, learning the wrong lessons from recent mistakes. Some historians say that the trauma of the Crimea headed British foreign policy unwisely away from engagement in Continental Europe. The horrors and mistakes of the first world war contributed mightily to the reluctance to fight another, feeding the mood for appeasement. The shame of the Holocaust may have dulled moral sensibilities to the mistakes Israel is making in the Middle East. The collapse of America's calamitous engagement in Vietnam frightened a generation in the West off the more interfering approach we should have taken to sinister or corrupt forces developing in the Third World.

When what you do could set a precedent, you have a special responsibility to get it right. In Iraq, the neocons got it wrong. There was nothing wrong in principle with an argument for pre-emptive action to forestall danger, but everything wrong with its application in this case. The risk now is that next time America may shrink from intervening when she should.

For what, in three years, will be the lessons the American people suppose themselves to have learnt from the war on Iraq? Surely it is 'Never again!' If by then they have removed a Republican president from office, this will have been in anger at the commitment of so much American money and so many American lives to a bloody and inconclusive scrap in a hot and

dusty place many thousands of miles away. George W. Bush's Democrat successor at the White House would be under pressure to run a foreign policy that draws in America's horns.

And if Mr Bush is re-elected? That is not unlikely; what is unlikely is that this would be on the crest of a wave of public admiration for what has been done in Iraq. Between now and then, President Bush will want to change the subject — and may succeed. If so, and he wins, he will count himself lucky to have survived a narrow brush with fate: a messy experiment in foreign policy that the American people have been prepared to overlook. A second-term Bush will not be straining at the leash for new adventures abroad.

But Abroad needs America. To an extent we may overlook, much of the world proceeds on the assumption, often unconscious, that far away across the ocean lies a great and at heart benevolent power which believes in freedom and which has been prepared to act as a sort of guarantor of last resort for the values we share. What if the Arabian nightmare — in which the Washington neocons and their hounds here in Britain have landed the US–British coalition — were to usher in an era when America turned away from the rest of the world? Who knows where America may be needed next?

The Left, of course, will oppose American intervention anywhere. But who cares what the Left thinks any more? Who cares what paranoid fantasies dance through the mind of Michael Meacher? Serious 21st-century people need not trouble themselves with the Left's critique; what is more dangerous is that irritation with the Left may lead reasonable people into the arms of an increasingly shrill and dotty band of diehards on the Right who still argue that intervention in Iraq was the right thing.

Loyalty to George W. Bush and Tony Blair is touching, given that those two gentlemen almost certainly now regret getting themselves into this in the first place. If you doubt it, do what I do and, instead of asking what case can be made for a course of action already taken, ask whether, with the benefit of hindsight, those who chose it would in fact choose it again. I repeat, not 'do I justify doing it?' but 'would I do it?'

Stop blustering about how the choice can be defended — we know it can. Stop protesting that critics have been unfair — of course they have. Stop insisting that many false claims have been made — that is doubtless the case. Stop reciting the benefits that may yet flow — they may indeed. Cease the angry cry of 'well, what would you have done?' — critics may well not have the foggiest idea.

Accept that your side of the argument is stronger and better-intentioned than an unjust world has even begun to accept — for so it indubitably is. Take it as read that your critics are a shower of stupid, whingeing, unreasonable twisters — of course they are, my darling — and pause, shut your eyes and take a deep, quiet breath, and in a perfectly friendly and unaccusatory way ask yourself that eternal little question, 'Would I do it again?'

The answer will pop from your lips before your intellect has time to register it. Of course you wouldn't.

Wrapped and muffled, then, in layers of denial, resentment and rationalisation, a small but gathering consensus whispers that the Iraq war has been an honest mistake, a ghastly miscalculation by a group of men and women who really did want to make the world a safer place but mistook how to do it. And the awful danger is that failure in this instance has discredited a noble argument: the general case for American internationalism. US isolationalism has been the long-term beneficiary, and we may all live to regret it.

Right at the start of this crisis, a clever and independent MP on the Right, Andrew Tyrie, argued that contrary to what people like me were saying the problem with America was not that she could rule the world, but that she cannot: America's wealth relative to that of the rest of the world has declined steadily in the past 50 years. Unrivalled as her military power is, she would be hard put to fight on many fronts. She could come a cropper.

Faced with what may become a living demonstration of these truths, America may soon lose heart. And that is the charge I make against the warmongers of 2003 on both sides of the Atlantic. They have egged on a nation and its president towards a conflict that can end only in despair. American despair will be bad for the world.

Matthew Panis is a political columnist of the Times