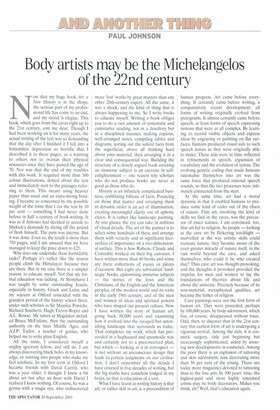 Body artists may be the Michelangelos of the 22nd century

Now that my huge book Art: a New Histoty is in the shops, the serious part of my professional life has come to an end, and my mood is elegiac. This book, which goes from the caves right up to the 21st century, cost me dear. Though I had been working on it for many years, the actual writing of the text was so demanding that the day after I finished it I fell into a bottomless depression so horrific that I described it in these pages, as a warning to others not to overtax their physical resources once they have passed the age of 70. Nor was that the end of my troubles with this work. It required more than 300 colour illustrations, dotted about the text and immediately next to the passages referring to them. This meant using heavier paper than usual and an extra-strong binding. I became so concerned by the possible weight of the tome that I cut the text by 10 per cent — something I had never done before in half a century of book-writing. It was as if Antonio had decided to accede to Shylock's demands by slicing off the pound of flesh himself. The pain was intense, But it was done. Even so, the result is more than 750 pages, and I am amazed that we have managed to keep the price down to £25.

Why does one undertake these formidable tasks? Perhaps it's rather like the reason people climb the Himalayas: because they are there. But in my case there is a simpler reason: to educate myself. Not that my formal education was lacking. At Stonyhurst I was taught by some outstanding Jesuits, especially in history, Greek and Latin; and my sojourn at Oxford coincided with the grandest period of the history school there, under such scholars as Sir Maurice Powicke, Richard Southern, Hugh Trevor-Roper and A.L. Rowse. My tutors at Magdalen included Bruce McFarlane, then the outstanding authority on the later Middle Ages, and A.J.P. Taylor, a teacher of genius, who helped me to write plain English.

All the same, I considered myself a mighty ignorant fellow, and still do. I am always discovering black holes in my knowledge, or running into people who make me feel sciolistic, In my first term at Oxford I became friends with David Carritt, who was a year older. I thought I knew a bit about art but after an hour with David I realised I knew nothing. Of course, he was a genius with a magic eye, who rediscovered more 'lost' works by great masters than any other 20th-century expert. All the same, it was a shock, and the kind of thing that is always happening to me. So I write books to educate myself. Writing a book obliges you to do a vast amount of systematic and cumulative reading, not in a desultory but in a disciplined manner, making copious, well-arranged notes, compiling tables and diagrams, sorting out the salient facts from the superficial, above all thinking hard about your material, then arranging it in a clear and consequential way. Building the structure of a closely argued book covering an immense subject is an exercise in selfenlightenment — one reason why scholars who do not produce books are never as good as those who do.

History is an infinitely complicated business, combining billions of facts. Pouncing on those that matter and arranging them in dynamic order is an act of illumination, creating meaningful clarity out of aphotic chaos. It is rather like landscape painting. At one glance the eye can take in millions of visual details. The art of the painter is to select some hundreds of these and arrange them with veracity and in significant hierarchies of importance on a two-dimensional surface. This is how Rubens, Claude and Constable worked on their big canvases. I have written more than 40 books and some are mere collections of essays or pieces d'occasion. But eight are substantial 'landscape' books, epitomising immense subjects — the stories of the Jews and the Christians, of the English and the American peoples, of the modern world and its roots in the early 19th century, and of the men and women of ideas and spiritual powers who have shaped our present culture. Now I have written the story of human art, going back 30,000 years and examining how it evolved into the ravaged but astonishing landscape that surrounds us today. That completes my work, which has proceeded in a haphazard and spasmodic way and certainly not to a preconceived plan, but which — looking at it in retrospect — is not without an unconscious design that leads to certain judgments on our civilisation. I don't remember all the details I have covered in five decades of writing, but the big truths have somehow lodged in my brain, so that is education of a sort.

What I have learnt in writing history is that art, or rather skill in art, is a precondition of human progress. Art came before everything. It certainly came before writing, a comparatively recent development: all forms of writing originally evolved from pictograms. It almost certainly came before speech, at least forms of speech expressing notions that were at all complex. By learning to record visible objects and express ideas by engraving or painting on flat surfaces, humans produced visual aids to such speech noises as they were originally able to make. These aids were in time reflected in refinements in speech, expansion of vocabulary and the evolution of syntax. The evolving genetic coding that made humans rationalise themselves into art was the same force that produced rational speech sounds, so that the two processes were intimately connected from the start.

At the same time, art had a moral dynamic in that it enabled humans to produce some kind of order out of the chaos of nature. Fine art, involving the kind of skills we find in the caves, was the precursor of exact science. I am convinced, too, that art led to religion. As people — looking at the cave art by flickering torchlight — marvelled at the way artistic skills could recreate nature, they became aware of the even greater miracle of nature itself, in the vast world beyond the cave, and asked themselves: who could it be who created that? Thus cave art was thought-provoking, and the thoughts it provoked provided the impetus for men and women to lay the foundations of theories about life and about the universe. Precisely because of its non-material, metaphysical qualities, art became the father of religion.

Cave paintings were not the first form of human art. They were preceded, perhaps by 100,000 years, by body adornment, which has, of course, disappeared without trace. Odd, then, to discover that in the 21st century this earliest form of art is undergoing a vigorous revival, Among the rich, it is cosmetic surgery, only just beginning but increasingly sophisticated, aided by amazing new developments in cosmetics. Among the poor there is an explosion of tattooing and skin adornment, now decorating more than 50 per cent of the young. There are today more magazines devoted to tattooing than to the fine arts. In 100 years' time, the highest-paid and most highly esteemed artists may be body decorators. Makes you think, eh? Well, that's education again.