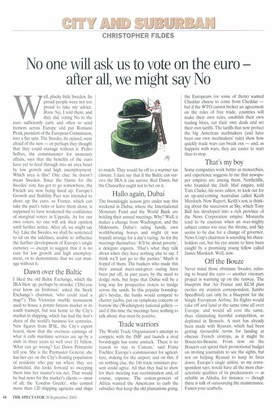 No one will ask us to vote on the euro after a, we might say No

lyvell, plucky little Sweden, Its proud people were not too proud to take my advice. Rasta Nej, I told them, and they did, voting No to the euro sufficiently early and often to send tremors across Europe and put Romano Prodi, president of the European Commission, into a flat spin. The Swedes, he opined, were afraid of the new — or perhaps they thought that they could manage without it. Pedro Solbes, the commissioner for monetary affairs, says that the benefits of the euro have yet to feed through into an area beset by low growth and high unemployment. Which area is this? One clue: he doesn't mean Sweden. Since the blame for the Swedes' vote has got to go somewhere, the French are now being lined up. Europe's Growth and Stability Pact was intended to shore up the euro, so France, which can take the pact's rules or leave them alone, is supposed to have weakened the confidence of marginal voters in Uppsala. As for our own voters, no one will ask their opinion until further notice. After all, we might say We]. Like the Swedes, we shall be sentenced to sit on the sidelines, unable to influence the further development of Europe's single currency — except to suggest that it is no cure for low growth and high unemployment, or to demonstrate that we can manage without it.

Dawn over the Baltic

I liked the old Baltic Exchange, which the IRA blew up, perhaps by mistake. ('Did you ever know an Irishman,' asked the Stock Exchange's chairman, 'who could read a map?') This Victorian marble monument used to house a potato futures market in its south transept, but was home to the City's market in shipping, which has had the lion's share of the world's business for centuries. New figures from IFSL, the City's export board, show that the overseas earnings of what it calls maritime services are up by a sixth in three years to well over £1 billion. What can go wrong? Let Dawn Primarolo tell you. She is the Paymaster General, she has her eye on the City's floating population of residents who pay tax where they are domiciled, she looks forward to sweeping them into her master's tax net. That would be bad news for the market's clients — most of all, the 'London Greeks', who control more than 120 shipping agencies and ships to match. They would be off to a warmer tax climate. I dare say that if the Baltic can survive the IRA it can survive Red Dawn, but the Chancellor ought not to bet on it.

The boondoggle season gets under way this weekend in Dubai, where the International Monetary Fund and the World Bank are holding their annual meetings. Why? Well, it makes a change from Washington, and the Maktoums, Dubai's ruling family, own world-beating horses and might (it was hoped) arrange for a day's racing. As for the meetings themselves: 'It'll be about poverty', a delegate expects. 'That's what they talk about when they have nothing else to say. I think we'll just go to the parties.' Much is hoped of them. The bankers who made this their annual meet-and-greet outing have been put off, in past years, by the need to dodge riots, but hope that Dubai will be a long way for prospective rioters to trudge across the sands. In this popular boondoggle's heyday, the banks would compete to charter yachts, put on symphony concerts or borrow the (Washington) national gallery — and if this time the meetings have nothing to talk about, that must be positive.

The World Trade Organisation's attempt to compete with the IMF and launch a rival boondoggle has come unstuck. 'There is no reason to stay in Cancun,' said Franz Fischler, Europe's commissioner for agriculture, making for the airport, and on this, if on nothing else, the 146 trade ministers present could agree. All that they had to show for their meeting was recrimination and, of course, expense. The cotton-growers of Africa wanted the Americans to curb the subsidies that keep the old plantations going, the Europeans (or some of them) wanted Cheddar cheese to come from Cheddar — but if the WTO cannot broker an agreement on the rules of free trade, countries will make their own rules, establish their own trading blocs, cut their own deals and set their own tariffs. The tariffs that now protect the big American steelmakers (and have been our own steelmakers' ruin) show how quickly trade wars can break out — and, as happens with wars, they are easier to start than to stop.

Some companies work better as monarchies, and experience suggests to me that newspaper empires are among them. Northcliffe, who founded the Dai47 Mail empire, told Tom Clarke, his news editor, to look out for an up-and-coming Australian called Keith Murdoch. Now Rupert, Keith's son, is thinking about the succession at Sky, which Tony Ball has developed into a rich province of the News Corporation empire. Monarchs tend to be cautious when an over-mighty subject comes too near the throne, and Sky seems to be due for a change of governor. News Corp's chairman is sounding his shareholders out, but his eye seems to have been caught by a promising young fellow called James Murdoch. Well, now.

Never mind those obstinate Swedes, refusing to board the euro — another visionary project is warming up on the runway. The blueprint that Air France and KLM plan (writes my aviation correspondent, Jumbo Speedbird) can only be a blueprint for the Single European Airline. Its flights would take off and land at the same time all over Europe, and would all cost the same, thus eliminating harmful competition, so deplored in Brussels. A start has already been made with Ryanair, which had been getting favourable terms for landing at obscure French airstrips, as it might be Bouze-les-Beaune. From now on the Bouzers can spend their promotional budget on inviting journalists to see the sights, but not on helping Ryanair to keep its fares down. Europe's single airline, so my conespondent says, would have all the most characteristic qualities of its predecessors — as reliable as Alitalia. for instance — though there is talk of outsourcing the maintenance. Fasten your seatbelts.