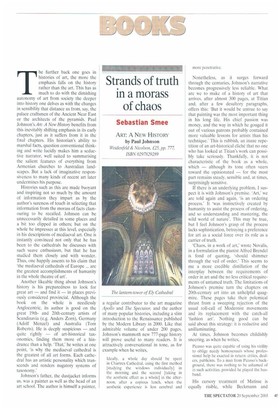 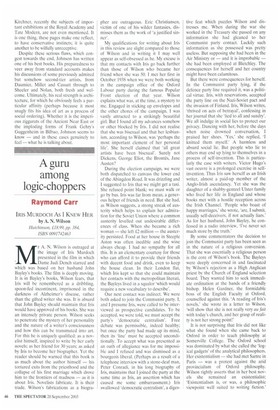 Strands of truth in a morass of chaos

ART: A NEW HISTORY by Paul Johnson Weidenfeld & Nicolson, 125, pp. 777, ISBN 0297829289 The further back one goes in histories of art, the more the emphasis falls on the history rather than the art. This has as much to do with the dirnishing autonomy of art from society the deeper into history one delves as with the changes in sensibility that distance us from, say, the palace craftsmen of the Ancient Near East or the architects of the pyramids. Paul Johnson's Art: A New Histoiy benefits from this inevitably shifting emphasis in its early chapters, just as it suffers from it in the final chapters. His historian's ability to marshal facts, question conventional thinking and write lucidly makes him a seductive narrator, well suited to summarising the salient features of everything from Armenian churches to Australian landscapes. But a lack of imaginative responsiveness to many kinds of recent art later undermines his purpose.

Histories such as this are made buoyant and inspiring not so much by the amount of information they impart as by the author's sureness of touch in selecting that information from the morass of facts clamouring to be recalled, Johnson can be unnecessarily detailed in some places and a bit too clipped in others; but on the whole he impresses at this level, especially in his descriptions of mediaeval art. One is instantly convinced not only that he has been to the cathedrals he discusses with such suave enthusiasm, but that he has studied them closely and with wonder. Thus, one happily assents to his claim that 'the mediaeval cathedrals of Europe ... are the greatest accomplishments of humanity in the whole theatre of art'.

Another likeable thing about Johnson's history is his preparedness to look for great art — and find it — in places previously considered provincial. Although the book on the whole is needlessly Anglocentric, its author is good on the great 19thand 20th-century artists of Scandinavia (e.g. Anders Zorn), Germany (Adolf Menzel) and Australia (Tom Roberts). He is deeply suspicious — and quite rightly — of art-historical taxonomies, finding them more of a hindrance than a help. 'That,' he writes at one point, is why the mediaeval cathedral is the greatest of all art forms. Each cathedral has an artistic personality which transcends and renders nugatory systems of taxonomy.'

Johnson's father, the dustjacket informs us, was a painter as well as the head of an art school. The author is himself a painter, a regular contributor to the art magazine Apollo and The Spectator, and the author of many popular histories, including a slim introduction to the Renaissance published by the Modern Library in 2000. Like that admirable volume of under 200 pages, Johnson's mammoth new 777-page history will prove useful to many readers. It is attractively conversational in tone, as for example when he writes,

Ideally, a whole day should be spent in Chartres Cathedral, using the first method [studying the windows individually] in the morning and the second [taking in the aesthetic effect as a whole] in the afternoon, after a copious lunch, when the aesthetic experience is less cerebral and

Nonetheless, as it surges forward through the centuries, Johnson's narrative becomes progressively less reliable. What are we to make of a history of art that arrives, after almost 300 pages, at Titian and, after a few desultory paragraphs, offers this: 'But it would be untrue to say that painting was the most important thing in his long life. His chief passion was money, and the way in which he gouged it out of various patrons probably contained more valuable lessons for artists than his technique.' This is rubbish, an inane repetition of an art-historical cliche that no one who has looked at Titian's work can possibly take seriously. Thankfully, it is not characteristic of the book as a whole, which — although its tone often veers toward the opinionated — for the most part remains steady, sensible and, at times, surprisingly sensitive.

If there is an underlying problem, I suspect it is with Johnson's premise. 'Art,' we are told again and again. 'is an ordering process.' It 'was instinctively created by humanity to assist the process of ordering, and so understanding and mastering, the wild world of nature'. This may be true, but I feel Johnson's grasp of the process lacks sophistication, betraying a preference for art as a social force over its role as a carrier of truth.

'Chaos, in a work of art,' wrote Novalis, in a formulation the pianist Alfred Brendel is fond of quoting, 'should shimmer through the veil of order.' This seems to me a more credible distillation of the interplay between the requirements of order in art and the no less critical requirements of untamed truth. The limitations of Johnson's premise turn the chapters on 20th-century art into an unhelpful quagmire. These pages take their polemical thrust from a sweeping rejection of the usual roll-call of Modernist movements and its replacement with the catch-all 'fashion art'. Nothing good can be said about this strategy: it is reductive and unilluminating.

At times, Johnson becomes childishly sneering, as when he writes,

Picasso was quite capable of using his virility to oblige needy homosexuals whose professional help he exacted in return: critics, dealers, publicists. To a man from Picasso's background, there was nothing to be ashamed of in such activities, provided he played the husband.

His cursory treatment of Matisse is equally risible, while Beckmann and Kirchner, recently the subjects of important exhibitions at the Royal Academy and Tate Modern, are not even mentioned. It is one thing, these pages make one reflect, to have conservative instincts; it is quite another to be wilfully unreceptive.

Despite these serious flaws, which congest towards the end, Johnson has written one of his best books. His preparedness to veer away from standard accounts makes his discussions of some previously admired but somehow second-tier artists, from Daumier, Millet and Cassatt through to Sheeler and Nolan, both fresh and welcome. Ultimately, his real strength is architecture, for which he obviously feels a particular affinity (perhaps because it most snugly fits his idea of art as a process of social ordering). Whether it is the imperious ziggurats of the Ancient Near East or the imploding forms of Frank Gehry's Guggenheim in Bilbao, Johnson seems to know — and in these cases genuinely to feel — what he is talking about.