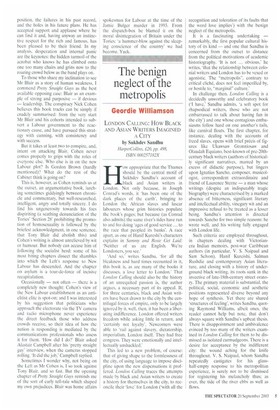 The benign neglect of the metropolis

LONDON CALLING: How BLACK AND ASIAN WRITERS IMAGINED A CITY by Sukhdev Sandhu HatperCollins, £20, pp. 498, ISBN 000257182X How appropriate that the Thames should be the central motif of Sukhdev Sandhu's account of black and Asian writers in London. Not only because, in Joseph Conrad's words, it 'has been one of the dark places of the earth', bringing to London the African staves and lascar labourers whose grim histories populate the book's pages; but because (as Conrad also admits) the same river's tides have run to and t'ro doing 'ages of good service ... to the race that peopled its banks'. A race apart, as one of Hanif Kureshi's characters explains in Sammy and Rosie Get Laid: 'Neither of us are English. We're Londoners, you see.'

'And so.' writes Sandhu, 'for all the bleakness and hard times recounted in it, this book is, as are many of the books it discusses, a love letter to London,' That London Calling should also be the history of an unrequited passion is, the author argues, a necessary part of its appeal. If, for three centuries, black and Asian writers have been drawn to the city by the centrifugal forces of empire, only to be largely ignored by it, well, then, it has been a liberating indifference. London offered writers freedom while asking little in return, and 'certainly not loyalty'. Newcomers were able to 'rail against slavery, dictatorship, imperialism. London itself. They had free congress. They were emotionally and intellectually unshackled.' This led to a new problem, of course: that of giving shape to the formlessness of the city, of using language to impose discipline upon the new dispensations it proffered. London Calling traces the attempts made by black and Asian writers to create a history for themselves in the city, to reconcile their 'love' for London ('with all the recognition and toleration of its faults that the word love implies') with the benign neglect of the metropolis. It is a fascinating undertaking — remarkably, the first popular cultural history of its kind — and one that Sandhu is concerned from the outset to distance from the political motivations of academic historiography. 'It is not ... obvious,' he writes, 'that the relationship between colonial writers and London has to be vexed or agonistic. The "metropolis", contrary to critical cliché, does not feel imperilled by, or hostile to, "marginal" culture.' In challenge then, London Calling is a decidedly unworthy and celebratory book CI have,' Sandhu admits, 'a soft spot for rhapsodical writers, those who are not embarrassed to talk about having fun in the city') and one whose contagious enthusiasms follow hard on one another's tails, like carnival floats. The first chapter, for instance, dealing with the accounts of freed slaves, opens with brief précis of figures like Ukav,:saw Gronniosaw and Olaudah Equiano, best-known of pre-20thcentury black writers (authors of historically significant narratives, marred by an excess of didactic purpose), but lingers upon Ignatius Sancho, composer, musicologist, correspondent extraordinaire and friend of Laurence Sterne — a man whose writings (despite an indisputably tragic biography) were characterised by a marked absence of bitterness, significant literary and intellectual ability, vinegary wit and an impressive refusal to be treated as a lesser being. Sandhu's attention is directed towards Sancho for two simple reasons: he wrote well, and his writing fully engaged with London life.

Such criteria are employed throughout, in chapters dealing with Victorianera Indian memoirs, post-war Caribbean authors (in particular, V. S. Naipaul and Sam Selvon), Hanif Kureishi, Salman Rushdie and contemporary Asian literature, and closing with a history of underground black writing, its roots sunk in the invective of late-18th-century street oratory. The primary material is substantial, the political, social, economic and aesthetic positions represented diverse beyond any hope of synthesis. Yet there are shared 'structures of feeling', writes Sandhu, quoting Raymond Williams, albeit ones, the reader cannot help but note, that don't always square with Sandhu's upbeat thesis. There is disappointment and ambivalence evinced by too many of the writers examined in London Calling for them to be dismissed as isolated curmudgeons. There is a desire for acceptance by the indifferent city: the wound aching for the knife throughout. V. S. Naipaul, whom Sandhu repeatedly castigates for his glasshalf-empty response to his metropolitan experience, is surely not to be dismissed for registering his melancholy thus; as ever, the tide of the river ebbs as well as flows.