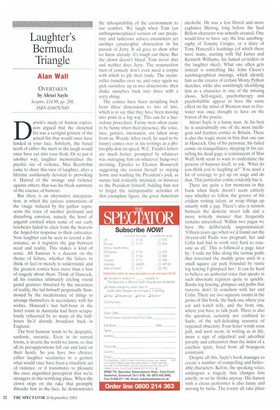 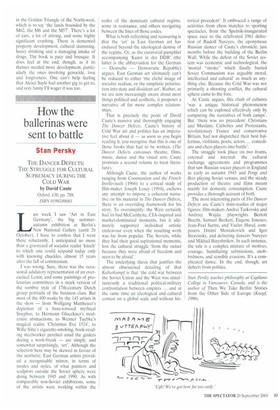 Darwin's study of human expression argued that the clenched fist was a vestigial gesture of the actual fist that would once have landed in your face. Similarly, the bared teeth of either the snarl or the laugh would once have cut into your flesh. Or to put it another way, laughter memorialises the psychic site of violence. Max Beerbohm came to share this view of laughter, after a lifetime assiduously devoted to provoking it. Hatred of the strange and violence against others: that was his bleak summary of the essence of humour.

But there is an alternative interpretation, in which the curious contortions of the visage induced by the guffaw represents the trace of another profound and disturbing emotion, namely the howl of anguish emitted when some of our early forebears failed to elicit from the heavens the hoped-for response to their entreaties. Now laughter can be seen to record a dissonance, as it registers the gap between need and reality. This makes a kind of sense. All humour is a descant on the theme of failure, whether the failure to think or feel or merely to understand, and the greatest comics have more than a hint of tragedy about them. Think of Hancock, all his routines ultimately circling round grand gestures thwarted by the meanness of reality, the lad himself perpetually flummoxed by the recalcitrance of things to arrange themselves in accordance with his wishes. Hancock's last half-hour in the hotel room in Australia had been scrupulously rehearsed by so many of the halfhours he'd already broadcast back in England.

The best humour tends to be dyspeptic, sardonic, sarcastic. Even in its surreal forms, it inverts the world we know, so that all its presuppositions fall out and land on their heads. So you have two choices: either laughter secularises to a gesture what would once have been a ritualistic act of violence, or it transmutes to pleasure the once anguished perception that we're strangers in this terrifying place. When the clown steps on the rake that promptly thwacks him in the face, he demonstrates the inhospitability of the environment to our comfort. We laugh when Tom (an anthropomorphised version of our predatory and ludicrous selves) encounters yet another catastrophic obstruction in his pursuit of Jerry. It all goes to show what we know already: it's tough out there. But the clown doesn't bleed. Tom never dies and neither does Jerry. The resurrection men of comedy don't even need a corpse with which to ply their trade. The steamroller trundles over us, and once again we pick ourselves up in two dimensions, then shake ourselves back into three with a sorry shrug.

The comics have been morph ing back from three dimensions to two of late, which is to say that they have been moving into print in a big way. This can be a hazardous procedure. Funny men often cease to be funny when their presence, the voice, face, gesture, intonation, are taken away from us. Woody Allen (well, he used to be funny) comes over in his writings as a philosophy don on speed. W.C. Fields's letters are much better, prompted by whatever was outraging him on whatever hung-over morning. Epistles to Eleanor Roosevelt suggesting she restrict herself to staying home and washing the President's jock, as nature had evidently intended, or missives to the President himself, bidding him not to forget the indispensable activities of that exemplary figure, the great American alcoholic. He was a less liberal and more explosive Herzog, long before the Saul Bellow character was actually created. One would love to have, say, the true autobiography of Tommy Cooper, or a diary of Tony Hancock's loathings (of which there were many, starting with Sid James and Kenneth Williams, his famed co-toilers in the laughter shed). What one often gets instead is something like John Cleese's autobiographical musings, which identify him as the creator of certain Monty Python sketches, while also unwittingly identifying him as a character in one of the missing shows. Self-regard, psychotherapy and psychobabble appear to have the same effect on the mind of Western man as firewater was once thought to have on the braves of the prairie.

Alexei Sayle is a funny man. At his best he is undoubtedly one of the most intelligent and fearless comics in Britain. There is also the tragic strain in him that one saw in Hancock. One of his personae, his failed comic on tranquillisers, sleeping in his car, telling his dead gags, is reminiscent of Max Wall: both seem to want to undermine the process of humour itself, to ask, 'What do you think you're laughing at?' You need a lot of courage to get up on stage and do that. This particular comic evidently has it.

There are quite a few moments in this book when Sayle doesn't seem entirely sure whether to follow the groove of his evident writing talent, or wrap things up smartly with a gag. There's also a tension between the demotic street talk and a more writerly manner that frequently remains unresolved, Within two pages we have the deliberately ungrammatical: 'Fifteen years ago when we'd found out the 18-year-old Paula was pregnant, her and Cohn had had to work very hard to reassure us all.' This is followed a page later by: 'I rode my bike along the tarmac paths that traversed the muddy grass until in a small square car park bounded by rustic log fencing I glimpsed her.' It can be hard to believe an authorial voice that speaks in such dissonant registers quite so quickly. Rustic log fencing, glimpses and paths that traverse don't fit somehow with her and Colin. There are two separate rooms in the prose of this book, the back one where you eat and watch telly, and the front one, where you have to talk posh. There is also the question, certainly not confined to Sayle, of the self-defeating resource of repeated obscenity. Four-letter words soon pall, and soon seem, in writing as in life, more a sign of adjectival and adverbial poverty and exhaustion than the index of a carefree spirit, freed from all bourgeois constraint.

Despite all this, Sayles book manages to create a number of compelling and believable characters. Kelvin, the speaking voice, undergoes a tragedy that changes him utterly, or so he thinks anyway. His liaison with a circus performer is also funny and moving by turns. The events all take place in the Golden Triangle of the North-west, which is to say the lands bounded by the M62, the M6 and the M57'. There's a lot of cars, a lot of driving, and some highly significant crashing. There is demented property development, cultural slumming, hew,y drinking and a damaging intake of drugs. The book is pacy and brusque. It does feel at the end, though, as if its themes needed more development, particularly the ones involving genocide, love and forgiveness. One can't help feeling that Alexei Sayle had another gig to get to, and very funny I'll wager it was too.