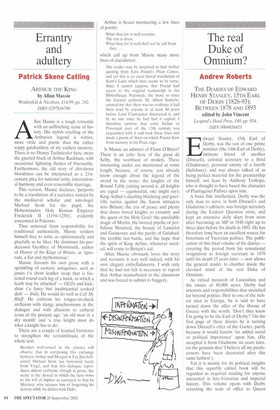 ARTHUR THE KING by Allan Massie Weidenfeld & Nicolson, £14.99, pp. 292, ISBN 0297816780 AIlan Massie is a tough romantic with an unflinching sense of history. His stylish retelling of the Arthurian legend is wittier, more virile and poetic than the rather soppy galahaddery of my earliest memory. There is no Disney Technicolor here, more the gnarled black of Arthur Rackham, with occasional lightning flashes of bisexuality. Furthermore, the old story of chivalrous bloodiness can be interpreted as a 21stcentury plea for national unity, international harmony and even reasonable marriage.

This version, Massie declares, 'purports to be a translation of a narrative written by the mediaeval scholar and astrologer Michael Scott for his pupil, the Hohenstaufen Holy Roman Emperor Frederick II (1194-1250)', evidently ensconced in Palermo.

Thus removed from responsibility for traditional authenticity, Massie renders himself free to write as opinionatedly and playfully as he likes. He dismisses his predecessor Geoffrey of Monmouth, author of History of the Kings of Britain, as 'ignorant, a liar and mythomaniac'.

Massie flavours his own prose with a sprinkling of esoteric antiquities, such as jesses (ca short leather strap that is fastened round each leg of a hawk, to which a leash may be attached' — QED) and kickshaw Ca fancy hut insubstantial cooked dish' — ibid). He would do well in Call My Bluff. He enlivens his tongue-in-cheek archaism with slangy anachronisms in the dialogue and with allusions to cultural icons of the present age: an old man in a dry month' and 'a true knight must do what a knight has to do'.

There are a couple of learned footnotes to strengthen the verisimilitude of the whole text:

Readers well-versed in the classics will observe that in composing this exchange between Arthur and Morgan le Fay [his halfsister] Michael Scott has borrowed freely from Virgil. and that this dialogue reproduces almost verbatim, though in prose, the scene in the Aeneid in which the hero bows to the will of Jupiter as conveyed to him by Mercury, who accuses him of forgetting his destiny while he dallies with Dido.

Arthur is heard murmuring a few lines of poetry:

What thou lov'st well remains.

The rest is dross.

What thou lov'st well shall not be reft from thee ...

which call up from Massie many more lines of elucidation:

The reader may be surprised to find Arthur quoting from Ezra Pound's Pisan Cantos, and yet this is an exact literal translation of Scott's Latin which here seems to be verse. Since I cannot suppose that Pound had access to the original manuscript in the Bibliotheque Nationale, the more so since the learned archivist, M. Albert Saniette, assured me that there was no evidence it had been read by anyone in at least 40 years before Lord Clanroyden discovered it, and by no one since he had had it copied, I therefore surmise that some Italian or Provençal poet of the 13th century was acquainted with it and took these lines and made a poem of them on which Pound drew from memory in his Pisan cage.

Is Massie an admirer of Hann O'Brien? There is an echo here of the great de Selby, the worthiest of models. These interesting asides are mentioned at some length, because, of course, you already know enough about the legend of the sword in the stone; the knights of the Round Table (sitting around it, all knights are equal — equinoctial, one might say); King Arthur's dazzling blitzkrieg and guerrilla tactics against the Saxon intruders into Britain; the era of peace and plenty that drove bored knights to errantry and the quest of the Holy Grail; the unreliable magic of Merlin, the twisted psyche of perfidious Mordred, the beauty of Lancelot and Guinevere and the purity of Galahad; the terrible last battle, and the hope that the spirit of King Arthur, whenever needed, will comic to Britain's aid.

Allan Massie obviously loves the story and recounts it very well indeed, with his own elegant embellishments. I wish only that he had not felt it necessary to report that Arthur masturbated in the classroom and was forced to submit to buggery.