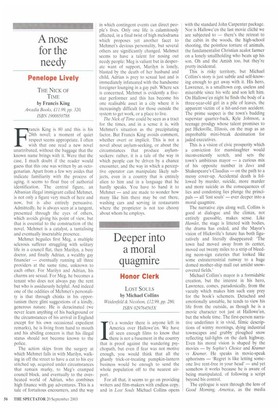 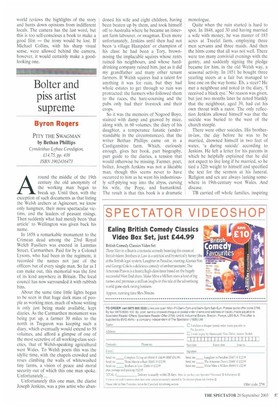 Deeper into a moral quagmire

LOST SOULS by Michael Collins Weidenfeld & Nicolson, £12.99, pp. 280, ISBN 029764565X 1 t's a wonder there is anyone left in America over Hallowe'en. We have all seen enough films to know that there is not a basement in the country that is proof against the wandering psychopath, but even if fear was not motive enough, you would think that all the ghastly trick-or-treating pumpkin-lantern business would be enough to send the whole population off to the nearest airport.

For all that, it seems to go on providing writers and film-makers with endless copy, and in Lost Souls Michael Collins opens with the standard John Carpenter package. Nor is Hallowe'en the last movie cliché we are subjected to — there's the retreat to the cabin in the woods, the high-school shooting, the pointless torture of animals, the fundamentalist Christian zealot farmer on a lonely smallholding who beats up his son. Oh and the Amish too, but they're pretty incidental.

This is risky territory, but Michael Collins's story is just subtle and self-knowing enough to get away with it. His hero, Lawrence, is a smalltown cop, useless and miserable since his wife and son left him. On Hallowe'en night he finds the body of a three-year-old girl in a pile of leaves, the apparent victim of a hit-and-run accident. The prime suspect is the town's budding superstar quarter-back, Kyle Johnson, a teenage prodigy whose talent promises to put Hicksville, Illinois, on the map as an improbable mini-break destination for jaded executives.

This is a vision of civic prosperity which a conviction for manslaughter would inconveniently scotch, and sets the town's ambitious mayor — a curious mix of his opposite number in Jaws and Shakespeare's Claudius — on the path to a messy cover-up. Accidental death is followed by murder, suicide, more murder and more suicide as the consequences of lies and condoning lies plunge the principals — all 'lost souls' — ever deeper into a moral quagmire.

The narrative zips along well, Collins is good at dialogue and the climax, not entirely guessable, makes sense. Like Hamlet, the stage is littered with bodies, the drama has ended, and the Mayor's vision of Hicksville's future has both figuratively and literally disappeared: 'The town had moved away from its center, moved out twenty miles to a strip of bleeding neon-sign eateries that looked like some extraterrestrial runway to a huge domed mother-ship mall out amidst snowcovered fields.'

Michael Collins's mayor is a formidable creation, but the interest in his hero, Lawrence, comes, paradoxically, from the vacuity which makes him such easy prey for the book's schemers. Detached and emotionally unstable, he tends to view his life from the outside, as though he is a movie character not just at Hallowe'en, but the whole time. The first-person narrative underlines it in vivid, filmic descriptions of wintry mornings, dying industrial townscapes and grubby ploughed snow reflecting tail-lights on the dark highway. Even his moral vision is shaped by the movies — by Sophie's Choice and Kramer vs Kramer. He speaks in movie-speak aphorisms — 'Regret is like letting someone live rent-free in your head' — and yet somehow it works because he is aware of being manipulated, of following a script beyond his control.

The epilogue is seen through the lens of Good Morning, America, as the media world reviews the highlights of the story and hunts down opinions from indifferent locals, The camera has the last word, but this is too self-conscious a book to make a good film — the irony would be lost. If Michael Collins, with his sharp visual sense, were allowed behind the camera, however, it would certainly make a goodlooking one.