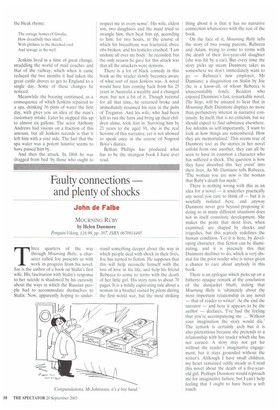 Faulty connections and plenty of shocks

Three quarters of the way through Mourning Ruby, a character called Joe presents us with work in progress from his novel. Joe is the author of a book on Stalin's first wife. His fascination with Stalin's response to her suicide is shadowed by his curiosity about the ways in which the Russian people had to accommodate themselves to Stalin. Now, apparently hoping to under

stand something deeper about the way in which people deal with shock in their lives, Joe has turned to fiction. He supposes that this will help reconcile himself with the loss of love in his life, and help his friend Rebecca to come to terms with the death of her little girl. His story runs to about 70 pages. It is a mildly captivating tale about a woman in a brothel visited by pilots during the first world war, but the most striking thing about it is that it has no narrative connection whatsoever with the rest of the book.

On the face of it, Mourning Ruby tells the story of two young parents, Rebecca and Adam, trying to come to terms with the death of their five-year-old daughter (she was hit by a car). But every time the story picks up steam Dunmore takes us somewhere we don't immediately want to go — Rebecca's new employer, Mr Damiano; a disquisition on Stalin by Joe (he is a know-all, of whom Rebecca is unaccountably fond). Readers who enjoyed Dunmore's last, remarkable novel, The Siege, will be amazed to hear that in Mourning Ruby Dunmore displays no more than perfunctory interest in narrative continuity. In itself, that is no criticism, but we should expect to find substance elsewhere. Joe informs us self-importantly, 'I want to look at how things are remembered. How they are memorialised.' This seems true of Dunmore too: as the stories in her novel unfold from one another, they can all be seen to have in common a character who has suffered a shock. The question is how they have absorbed this 'key event' into their lives. As Mr Damian+) tells Rebecca, 'The woman you are now is the woman that Ruby's death has made.'

There is nothing wrong with this as an idea for a novel it underlies practically any novel you care to think of — but it is woefully isolated here, and anyway Dunmore never gets beyond proposing it: doing so in many different situations does not in itself constitute development. She makes the point that most lives, when examined, are shaped by shocks and tragedies, but this scarcely redefines the human condition. Yet it is here, by developing character, that fiction can be illuminating, and it is precisely this that Dunmore declines to do, which is very dismal for the poor reader who is never given a chance to care about anybody in this book.

There is an epilogue which picks up on a hitherto opaque remark at the conclusion of the dustjacket blurb, stating that Mourning Ruby is 'ultimately about the most important relationship in any novel — that of reader to writer'. At the end the narrator — and here it appears to be the author — declares. 'I've had the feeling that you're accompanying me ... Without your imagination the story would die.' The remark is certainly arch but it is also pretentious because she pretends to a relationship with her reader which she has not earned. A story may not get far without the reader's imaginative engagement, but it stays grounded without the writer's. Although I have small children, my heart remained oddly steady as I read this novel about the death of a five-yearold girl. Perhaps Dunmore would reproach me for imaginative failure, but I can't help feeling that I ought to have been a soft touch.