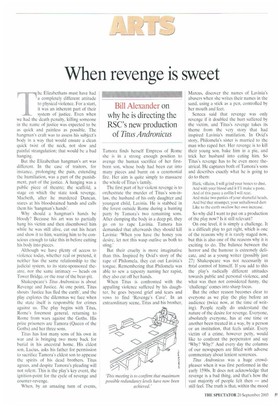 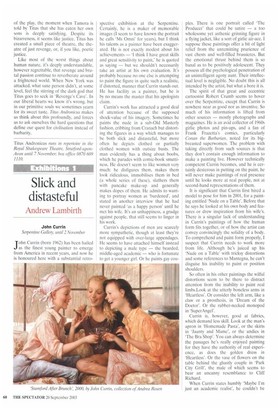 When revenge is sweet

The Elizabethans must have had a completely different attitude to physical violence. For a start, it was an inherent part of their system of justice. Even when we had the death penalty, killing someone in the name of justice was expected to be as quick and painless as possible. The hangman's craft was to assess his subject's body in a way that would ensure a clean quick twist of the neck, not slow and painful strangulation; that would be a bad hanging.

But the Elizabethan hangman's art was different. In the case of traitors, for instance, prolonging the pain, extending the humiliation, was a part of the punishment, part of the justice. A hanging was a public piece of theatre; the scaffold, a stage on which the state took revenge. Macbeth, after he murdered Duncan, stares at his bloodstained hands and calls them his 'hangman's hands'.

Why should a hangman's hands be bloody? Because his art was to partially hang his victim and then disembowel him while he was still alive, cut out his heart and show it to him, wanting him to be conscious enough to take this in before cutting his body into pieces.

Although we have plenty of access to violence today, whether real or pretend, it neither has the same relationship to the judicial system, to its state-sponsored theatre, nor the same intimacy — heads on Tower Bridge, or the roar of the bear-pit.

Shakespeare's Titus Andronicus is about Revenge and Justice. At one point, Titus shouts 'Justice has fled the earth', and the play explores the dilemmas we face when the state itself is responsible for crimes against us. The play begins with Titus, Rome's foremost general, returning to Rome from wars against the Goths. His prize prisoners are Tamora (Queen of the Goths) and her three sons.

Titus has lost many sons of his own in war and is bringing two more back for burial in his ancestral home. His eldest son, Lucius, asks his father for permission to sacrifice Tamora's eldest son to appease the spirits of his dead brothers. Titus agrees, and despite Tamora's pleading will not relent. This is the play's key event, the ignition-point for the cycle of revenge and counter-revenge.

When, by an amazing turn of events, Tamora finds herself Empress of Rome she is in a strong enough position to avenge the human sacrifice of her firstborn son, whose body had been cut into many pieces and burnt on a ceremonial fire. Her aim is quite simply to massacre the whole of Titus's family.

The first part of her violent revenge is to orchestrate the murder of Titus's son-inlaw, the husband of his only daughter and youngest child, Lavinia. He is stabbed in the forest outside Rome during a hunting party by Tamora's two remaining sans. After dumping the body in a deep pit, they go on to rape Lavinia. Tamara has demanded that afterwards they should kill Lavinia: 'When you have the honey you desire, let not this wasp outlive us both to sting.'

But their cruelty is more imaginative than this. Inspired by Ovid's story of the rape of Philomela, they cut out Lavinia's tongue. Remembering that Philomela was able to sew a tapestry naming her rapist, they also cut off her hands.

When Titus is confronted with the appalling violence suffered by his daughter, he goes beyond grief and tears and vows to find 'Revenge's Cave'. In an extraordinary scene, Titus and his brother, Marcus, discover the names of Lavinia's abusers when she writes their names in the sand, using a stick as a pen, controlled by her mouth and feet.

Seneca said that revenge was only revenge if it doubled the hurt suffered by the victim, and Titus's revenge takes its theme from the very story that had inspired Lavinia's mutilation. In Ovid's story, Philomela's sister is married to the man who raped her. Her revenge is to kill their young son, bake him in a pie, and trick her husband into eating him. So Titus's revenge has to be even more theatrical. He captures both of Tamora's sons and describes exactly what he is going to do to them:

Hark, villains, I will grind your bones to dust, And with your blood and it I'll make a paste, And of this paste a coffin twill rear,

And make two pasties of your shameful heads, And bid that strumpet, your unhallowed dam Like to the earth swallow her own increase.

So why did I want to put on a production of the play now? Is it still relevant?

On one level, it is simply a challenge. It is a difficult play to get right, which is one of the reasons why it is rarely staged now, but this is also one of the reasons why it is exciting to do. The balance between the horror and the humour is extremely delicate, and as a young writer (possibly just 27) Shakespeare was not necessarily in rotal control of himself. If you add to this the play's radically different attitudes towards public and personal violence, and what was then not considered funny, the 'challenge' comes into sharp focus.

But the other reason becomes clear to everyone as we play the play before an audience (twice now, at the time of writing). People really do understand the nature of the desire for revenge. Everyone, absolutely everyone, has at one time or another been treated in a way, by a person or an institution, that feels unfair. Every victim of a crime, however petty, would like to confront the perpetrator and say 'Why? Why?' And every day the columns of our newspapers are filled with adverse commentary about lenient sentences.

Titus Andronicus was a huge crowdpleaser when it was first performed in the early 1590s. It does not acknowledge that revenge is a bad thing, and that's how the vast majority of people felt then — and still feel. The truth is that, within the mood of the play, the moment when Tamora is told by Titus that she has eaten her own sons is deeply satisfying. Despite its bizarreness, it seems like justice. Titus has created a small piece of theatre, the theatre of just revenge, or, if you like, poetic justice.

Like most of the worst things about human nature, it's deeply understandable, however regrettable, that revenge and brutal passion continue to reverberate around a frightened world. When New York was attacked, what sane person didn't, at some level, feel the stirring of the dark god that Titus goes to seek in 'Revenge's Cave'. In our liberal hearts we know it's wrong, but in our primitive souls we sometimes yearn for its sweet taste. Titus Andronicus makes us think about this profoundly, and forces us to ask ourselves the hard questions that define our quest for civilisation instead of barbarity.

Titus Andronicus runs in repertoire in the Royal Shakespeare Theatre, Stratford-uponAvon until 7 November; box office 0870 609 I .110,