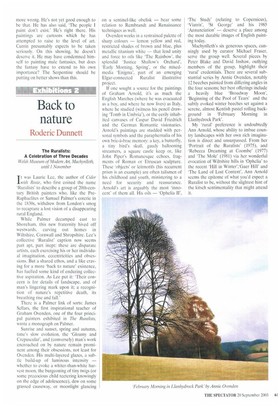 The Ruralists: A Celebration of Three Decades Welsh Museum of Modem Art, Machynlleth, until 1 November

I t was Laurie Lee, the author of Cider with Rosie, who first coined the name 'Ruralists' to describe a group of 20th-century British painters who, like the PreRaphaelites or Samuel Palmer's coterie in the 1830s, withdrew from London's smog to recapture a lost vision of a disappearing rural England.

While Palmer decamped east to Shoreham, this new fraternity hived off westwards, carving out homes in Wiltshire, Cornwall and Shropshire. Lee's collective 'Ruralist' caption now seems part apt, part inept: these are disparate artists, each exercising his or her individual imagination, eccentricities and obsessions. But a shared ethos, and a like craving for a more 'back to nature' existence, has fuelled some kind of enduring collective aspiration. As Lee put it: `Their concern is for details of landscape, and of man's lingering mark upon it; a recognition of nature's repetitive death, its breathing rise and fall.'

There is a Palmer link of sorts: James Sellars, the first inspirational teacher of Graham Ovenden, one of the four principal painters exhibited in The Ruralists, wrote a monograph on Palmer.

Sunrise and sunset, spring and autumn, time's slow evolution. the `Gloamy and Crepuscular', and (conversely) man's work encroached on by nature remain prominent among their obsessions, not least for Ovenden, His multi-layered glazes, a subtle build-up of luminous intensity — whether to evoke a whiter-than-white harvest moon, the burgeoning of tiny twigs (or some precocious child teetering knowingly on the edge of adolescence), dew on some grassed causeway, or moonlight glancing on a sentinel-like obelisk — bear some relation to Rembrandt and Renaissance techniques as well.

Ovenden works in a restrained palette of sharp colours — lemon yellow and red, restricted shades of brown and blue, plus metallic titanium white — that lend unity and force to oils like 'The Rainbow', the splendid 'Justice Shallow's Orchard', 'Early Morning, Spring', or the mixedmedia 'Enigma', part of an emerging Elgar-connected Ruralist illustrative project.

If one sought a source for the paintings of Graham Arnold, it's as much the English Marches (where he was evacuated as a boy, and where he now lives) as Italy, where he studied (witness his pencil drawing 'Tomb in Umbria'), or the eerily inhabited canvases of Caspar David Friedrich and the German Romantic visionaries. Arnold's paintings are studded with personal symbols and the paraphernalia of his own bric-a-brac memory: a key, a butterfly, a tiny bird's skull, gaudy ballooning streamers, a square castle keep or, like John Piper's Romanesque echoes, fragments of Roman or Etruscan sculpture. These 'objects' or leitmotifs (his recurrent prism is an example) are often talismen of his childhood and youth, ministering to a need for security and reassurance. Arnold's art is arguably the most 'innocent' of them all. His oils — 'Ophelia II', 'The Study' (relating to Copernicus), `Viatrix', `St George' and his 1985 'Annunciation' — deserve a place among the most durable images of English painting today.

My 'rural' preference is undoubtedly Ann Arnold, whose ability to imbue country landscapes with her own rich imagination is direct and unsurpassed. From her 'Portrait of the Ruralists' (1975), and 'Rebecca Dreaming at Coombe' (1977) and 'The Mole' (1981) via her wonderful evocation of Wiltshire hills in `Ophelia' to the recent 'Hill in Winter','Gaer Hill' and 'The Land of Lost Content', Ann Arnold seems the epitome of what you'd expect a Ruralist to be, without the slightest hint of the kitsch sentimentality that might attend it.