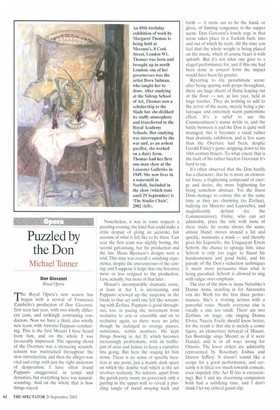 Puzzled by the Don

Don Giovanni Royal Opera rr he Royal Opera's new season has begun with a revival of Francesca Zambello's production of Don Giovanni, first seen last year, with two wholly different casts, and strikingly contrasting conductors. Now we have a third, also wholly new team, with Antonio Pappano conducting. This is the first Mozart I have heard from him, and on the whole I was favourably impressed. The opening chord of the Overture was a menacing scrunch, tension was maintained throughout the slow introduction, and then the allegro was vital and crisp, with just the right undertow of desperation. I have often found Pappano exaggerated, in tempi and dynamics, but everything here was naturalsounding. And on the whole that is how things stayed. Nonetheless, it was in some respects a puzzling evening, the kind that could make a critic despair of giving an accurate, fair account of what it felt like to be there. Last year the first team was slightly boring, the second galvanising, but the production and the late Maria Bjornson's designs were a trial. This time was overall a satisfying experience, despite the unevennesses of the casting; and I suppose it helps that one becomes more or less resigned to the production. Less, actually, but more of that later.

Mozart's incomparable dramatic sense, at least in Act I, is intoxicating. and Pappano screwed up the suspense in the finale to that act until one felt like screaming with Zerlina. Pappano is good throughout, too, in pacing the movement from recitative to aria or ensemble and on to recitative again, so there were no jolts; though he indulged in strange pauses, sometimes, within numbers. I-1e kept things flowing in Act II, which becomes increasingly problematic, with its trafficjam of arias and failure to keep a narrative line going. But here the staging let him down. There is no sense of specific location at any point, just a mainly dark space on which the double wall which is the set revolves restlessly. No indoors, apart from the garish party room; no graveyard, only a parting in the upper wall to reveal a puzzling tangle of metal swaying back and forth — it turns out to be the hand, or glove, of flaming vengeance in the supper scene. Don Giovanni's lonely orgy in that scene takes place in a Turkish bath, into and out of which he reels. All the time you feel that the whole weight is being placed on the music, which of course bears it with aplomb. But it's not what one goes to a staged performance for, and if this one had been done in concert form the impact would have been far greater.

Reverting to the penultimate scene: after being sparing with props throughout, there are huge sheets of flame leaping out of the floor — not, as last year, held in huge torches. They do nothing to add to the terror of the scene, merely being a picturesque and extremely warm pantomime effect. It's a relief to see the Commendatore's statue stride in, and the battle between it and the Don is quite well managed, but it becomes a vocal rather than dramatic exhibition, and is less scary than the Overture had been, despite Gerald Finley's game stripping down to his 18th-century boxers. To what extent that is the fault of his rather faceless Giovanni it's hard to say.

It's often observed that the Don hardly has a character, that he is more an elemental force, a frightening compound of energy and desire, the more frightening for being somehow abstract. Yet the finest Dons manage to convey this at the same time as they are charming (to Zerlina), bullying (to Masetto and Leporello), and magnificently defiant (to the Cornmendatore). Finley, who can act admirably, plays the role with none of these traits: he seems always the same, almost bland; moves around a lot and quickly, maintains a mask — and thereby gives his Leporello, the Uruguayan Erwin Schrott, the chance to upstage him, since Schrott is only too eager to flaunt his handsomeness and good build, and his parody of the Don's seduction techniques is much more persuasive than what is being parodied. Schrott is allowed to sing with vulgar over-emphasis.

The star of the show is Anna Netrebko's Donna Anna, standing in for Alexandra von der Weth for the first three performances. She's a riveting actress with a powerful voice. Nearly everyone else is vocally a size too small. There are two Zerlinas on stage, one singing Donna Elvira; Nuccia Focile should know better, for the result is that she is merely a comic figure, an elementary betrayal of Mozart. Ian Bostridge sings Mozart as if it were Handel, and is in all ways wrong for Ottavio. The lower orders are admirably represented by Rosemary Joshua and Darren Jeffery. It doesn't sound like a recipe for a good performance, and certainly it is tilted too much towards comedy, even slapstick (the Act II trio is excruciating). But I and my discerning companion both had a satisfying time, and I don't think I let my critical guard slip.