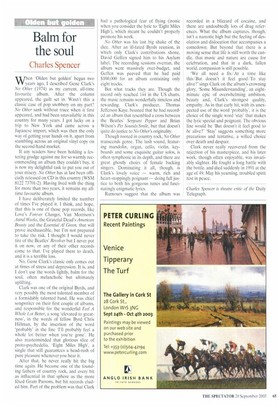 Balm for the soul

When 'Olden but golden' began two years ago, I described Gene Clark's No Other (1974) as my current, all-time favourite album, After the column appeared, the guilt set in. Wasn't this a classic case of pop snobbery on my part? No Other sank without trace when it first appeared, and had been unavailable in this country for many years. I got lucky on a trip to New York and came across a Japanese import, which was then the only way of getting your hands on it, apart from stumbling across an original vinyl copy on the second-hand market.

If any readers have been holding a festering grudge against me for so warmly recommending an album they couldn't buy, it is now my delightful task to put you out of your misery. No Other has at last been officially released on CD in this country (WSM 8122 73701-2). Having lived with the thing for more than two years, it remains my alltime favourite album.

I have deliberately limited the number of times I've played it. I think, and hope, that this is one of those pop records. like Love's Forever Changes, Van Morrison's Astral Weeks, the Grateful Dead's American Beauty and the Essential Al Green, that will prove inexhaustible, but I'm not prepared to take the risk. I thought I would never tire of the Beatles' Revolver but I never put it on now, or any of their other records come to that. I've played them to death, and it is a terrible loss.

No, Gene Clark's classic only comes out at times of stress and depression. It is, and I don't use the words lightly, balm for the soul, often melancholic but ultimately uplifting.

Clark was one of the original Byrds, and very possibly the most talented member of a formidably talented band. He was chief songwriter on their first couple of albums, and responsible for the wonderful Feel A Whole Lot Better, a song 'elevated to greatness', in the words of fellow Byrd Chris Hillman, by the insertion of the word 'probably' in the line 'I'll probably feel a whole lot better when you're gone'. He also masterminded that glorious slice of proto-psychedelia. 'Eight Miles High', a single that still guarantees a head-rush of pure pleasure whenever you hear it.

After that, he never really hit the big time again. He became one of the founding fathers of country rock, and every bit as influential in that sphere as the more feted Gram Parsons, but hit records eluded him. Part of the problem was that Clark

had a pathological fear of flying (ironic when you consider the lyric to 'Eight Miles High.), which meant he couldn't properly promote his work.

No Other was his last big shake of the dice. After an ill-fated Byrds reunion, in which only Clark's contributions shone, David Geffen signed him to his Asylum label. The recording sessions overran, the album went massively over-budget, and Geffen was peeved that he had paid $100.000 for an album containing only eight tracks.

But what tracks they are. Though the record only reached 144 in the US charts, the music remains wonderfully timeless and rewarding. Clark's producer, Thomas Jefferson Kaye, boasted that he had recorded an album that resembled a cross between the Beatles' Sergeant Pepper and Brian Wilson's Pet Sounds/Smile, but that doesn't quite do justice to No Other's originality.

Though rooted in country rock, No Other transcends genre. The lush sound, featuring mandolin, organ, cello, violin, keyboards and some exquisite guitar solos, is often symphonic in its depth, and there are great ghostly choirs of female backing singers. Dominating it all, though, is Clark's lovely voice — warm, rich and heart-stoppingly poignant — doing full justice to both his gorgeous tunes and fascinatingly enigmatic lyrics.

Rumours suggest that the album was recorded in a blizzard of cocaine, and there are undoubtedly lots of drug references. What the album captures, though, isn't a narcotic high but the feeling of desolation and dislocation that accompanies a comedown. But beyond that there is a moving sense that life is still worth the candle, that music and nature are cause for celebration, and that in a dark, fallen world, compassion is still possible.

`We all need a fix/At a time like this /But doesn't it feel good/To stay alive?' sings Clark on the album's crowning glory, `Some Misunderstanding', an eightminute epic of overwhelming ambition, beauty and, Clark's strongest quality, empathy. As in that early hit, with its unexpected use of the word 'probably', it is the choice of the single word `stay' that makes the lyric special and poignant. The obvious line would be 'But doesn't it feel good to be alive?' Stay' suggests something more precarious and tentative, a willed choice over death and despair.

Clark never really recovered from the rejection of his masterpiece, and his later work, though often enjoyable, was invariably slighter. He fought a long battle with the bottle, and died suddenly in 1991 at the age of 49. May his yearning, troubled spirit rest in peace.