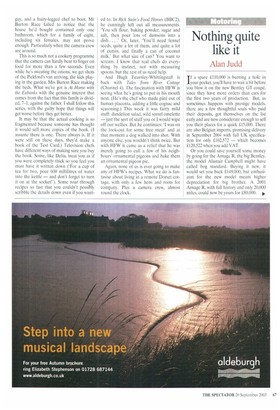 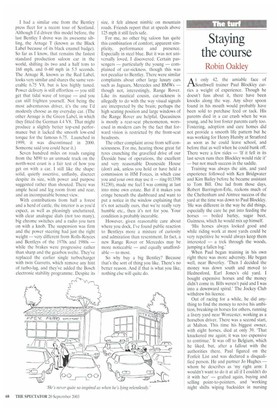 Ifa spare £110,000 is burning a hole in your pocket, you'll have to wait a bit before you blow it on the new Bentley GT coupe, since they have more orders than cars for the first two years of production. But, as sometimes happens with prestige models, there are a few thoughtful souls who paid their deposits, got themselves on the list early and are now considerate enough to sell you their places for a quick 115.000. There are also Belgian imports, promising delivery in September 2004 with full UK specification for only £102,572 — which becomes £120,522 when you add VAT.

Or you could save yourself some money by going for the Arnage R, the big Bentley, the model Alastair Campbell might have called bog standard. Buying it new, it would set you back £149,000, but enthusiasm for the new model means higher depreciation for big brother. A 2001 Arnage R, with full history and only 20,000 miles, could now be yours for £80,000. o,

I had a similar one from the Bentley press fleet for a recent tour of Scotland. Although I'd driven this model before, the last Bentley I drove was its awesome sibling, the Arnage T (known as the Black Label because of its black enamel badge). So far as 1 know, that remains the fastest standard production saloon car in the world, shifting its two and a half tons to 168 mph. and 0-60 mph in 5.5 seconds. The Arnage R. known as the Red Label, looks very similar and shares the same venerable 6.75 V8, but is less highly tuned. Power delivery is still effortless — you still get that tidal wave of torque — and you can still frighten yourself. Not being the most adventurous driver, it's the one I'd modestly choose as my everyday car. (The other Arnage is the Green Label, in which they fitted the German 4.4 V8. That might produce a slightly better top-end performance but it lacked the smooth low-end torque for the famous 6.75. Launched in 1999, it was discontinued in 2000. Someone said you could hear it.)

Seven hundred miles on roads ranging from the M90 to an unmade track on the north-west coast is a fair test of how you get on with a car. I still like the shape: solid, quietly assertive, unflashy, discreet despite its size, with power and purpose suggested rather than shouted. There was ample head and leg room front and rear, and an incomparable bonnet view.

With contributions from half a forest and a herd of cattle, the interior is as you'd expect, as well as pleasingly uncluttered, with clear analogue dials (not too many), big chrome switches and a radio you turn on with a knob. The suspension was firm and the power steering had just the right weight — very different from Rolls-Royces and Bentleys of the 1970s and 1980s — while the brakes were progressive rather than sharp and the gearbox svelte. They've replaced the earlier single turbocharger with twin Garretts, which remove any hint of turbo-lag, and they've added the Bosch electronic stability programme. Despite its size, it felt almost nimble on mountain roads. Friends report that at speeds above 125 mph it still feels safe.

For me, no other big saloon has quite this combination of comfort, apparent simplicity, performance and presence. Especially in steel blue. But it was not universally loved, I discovered. Certain passengers — particularly the young — complained of car-sickness, though this was not peculiar to Bentley. There were similar complaints about other large luxury cars such as Jaguars, Mercedes and BMWs — though not, interestingly, Range Rover. Like its nautical cousin, car-sickness is allegedly to do with the way visual signals are interpreted by the brain; perhaps the high seating position and large windows of the Range Rover are helpful. Queasiness is mostly a rear-seat phenomenon, worsened in modern cars by the fact that forward vision is restricted by the front-seat headrests.

The other complaint arose from self-consciousness. For me, hearing those great fat tyres crunching the gravelled drive of our Deeside base of operations, the excellent and very reasonable Douneside House (don't ask, unless you hold or have held a commission in HM Forces, in which case you and your own may use it — ring 013398 81230), made me feel I was coming at last into mine own estate. But if it makes you cringe beneath the dashboard and want to put a notice in the window explaining that it's not actually ours, that we're really very humble etc., then it's not for you. Your condition is probably incurable.

However, given reasonable care about where you dock, I've found public reaction to Bentleys more a mixture of curiosity and admiration than resentment. In fact, a new Range Rover or Mercedes may be more noticeable — and equally unaffordable — to most.

So why buy a big Bentley? Because that's the sort of thing you like, There's no better reason. And if that is what you like, nothing else will quite do.