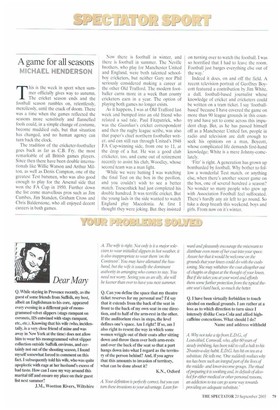 A game for all seasons

This is the week in sport when summer officially gives way to autumn. The cricket season ends and the football season rumbles on, relentlessly, mercilessly, until the crack of doom. There was a time when the games reflected the seasons more sensitively and flannelled fools could, in a simple change of costume, become muddied oafs, but that situation has changed, and no human agency can turn back the clock.

The tradition of the cricketer-footballer goes back as far as C.B. Fry, the most remarkable of all British games players. Since then there have been double internationals like Willie Watson and Arthur Milton. as well as Denis Compton, one of the greatest Test batsmen, who was also good enough to play for the Arsenal side that won the FA Cup in 1950. Further down the list come marvellous pros such as Jim Cumbes, Jim Standen, Graham Cross and Chris Balderstone, who all enjoyed decent careers in both games. Now there is football in winter, and there is football in summer. The Neville brothers, who play for Manchester United and England, were both talented schoolboy cricketers, but neither Gary nor Phil seriously considered making a career at the other Old Trafford. The modern footballer earns more in a week than county cricketers earn in a year. The option of playing both games no longer exists.

As it happens, I was at Old Trafford last week and bumped into an old friend who related a sad tale. Paul Fitzpatrick, who was the Guardian's cricket correspondent and then the rugby league scribe, was also that paper's chief northern footballer writer, and can still run through United's 1948 FA Cup-winning side, from one to 11, at the drop of a hat. He was a good club cricketer, too, and came out of retirement recently to assist his club, Woodley, whose second team was a man light.

'While we were batting I was watching the final Test on the box in the pavilion, and you couldn't wish to see a better match. Trescothick had just completed his double hundred. It was terrific cricket. But the young lads in the side wanted to watch England play Macedonia. At first I thought they were joking. But they insisted on turning over to watch the football. I was so horrified that I had to leave the room. Football just barges everything else out of the way.'

Indeed it does, on and off the field. A recent television portrait of Geoffrey Boycott featured a contribution by Jim White, a dull, football-based journalist whose knowledge of cricket and cricketers could be written on a tram ticket. I say 'footballbased' because I have covered the game on more than 90 league grounds in this country and have yet to come across this impudent chap. But, as he has passed himself off as a Manchester United fan, people in radio and television are daft enough to seek his opinions on a man, Boycott, whose complicated life demands first-hand knowledge: White is a mere Johnny-comelately.

'Fitz' is right. A generation has grown up bombarded by football. Why bother to follow a wonderful Test match, or anything else, when there's another soccer game on the box, one of several hundred a season? No wonder so many people who grew up with Association Football feel suffocated. There's hardly any air left to go round. So take a deep breath this weekend, boys and girls. From now on it's winter.