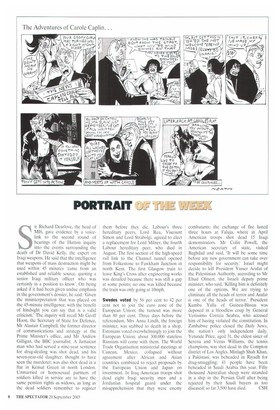 a voicelink to the second round of hearings of the Hutton inquiry into the events surrounding the death of Dr David Kelly, the expert on Iraqi weapons. He said that the intelligence that weapons of mass destruction might be used within 45 minutes 'came from an established and reliable source, quoting a senior Iraqi military officer who was certainly in a position to know'. On being asked if it had been given undue emphasis in the government's dossier, he said: 'Given the misinterpretation that was placed on the 45-minute intelligence, with the benefit of hindsight you can say that is a valid criticism.' The inquiry will recall Mr Geoff Hoon, the Secretary of State for Defence, Mr Alastair Campbell, the former director of communications and strategy at the Prime Minister's office, and Mr Andrew Gilligan, the BBC journalist. A Jamaican man who had served a nine-year sentence for drug-dealing was shot dead, and his seven-year-old daughter, thought to have seen the murderer, was also shot dead in a flat in Kensal Green in north London. Unmarried or homosexual partners of soldiers killed in service are to have the same pension rights as widows, as long as the dead soldiers remember to register

them before they die. Labour's three hereditary peers, Lord Rea, Viscount Simon and Lord Strabolgi, agreed to elect a replacement for Lord Milner, the fourth Labour hereditary peer, who died in August. The first section of the high-speed rail link to the Channel tunnel opened from Folkestone to Fawkham Junction in north Kent. The first Glasgow train to leave King's Cross after engineering works was derailed because there was still a gap at some points; no one was killed because the train was only going at lOmph.

Swedes voted by 56 per cent to 42 per cent not to join the euro zone of the European Union; the turnout was more than 80 per cent. Three days before the referendum, Mrs Anna Lindh, the foreign minister, was stabbed to death in a shop. Estonians voted overwhelmingly to join the European Union; about 300,000 stateless Russians will come with them. The World Trade Organisation ministerial meetings at Cancun, Mexico, collapsed without agreement after African and Asian countries combined to reject proposals by the European Union and Japan on investment. In Iraq American troops shot dead eight Iraqi security men and a Jordanian hospital guard under the misapprehension that they were enemy combatants; the exchange of fire lasted three hours at Faluja, where in April American troops shot dead 15 Iraqi demonstrators. Mr Colin Powell, the American secretary of state, visited Baghdad and said, 'It will be some time before any new government can take over responsibility for security,' Israel might decide to kill President Yasser Arafat of the Palestinian Authority, according to Mr Ehud Olmert, the Israeli deputy prime minister, who said, 'Killing him is definitely one of the options. We are trying to eliminate all the heads of terror and Arafat is one of the heads of terror.' President Kumba Yalla of Guinea-Bissau was deposed in a bloodless coup by General Verissimo Correia Seabra, who accused him of having violated the constitution. In Zimbabwe police closed the Daily News, the nation's only independent daily. Yetunde Price, aged 31, the eldest sister of Serena and Venus Williams, the tennis champions, was shot dead in the Compton district of Los Angles. Minlagh Shah Khan, a Pakistani, was beheaded in Riyadh for drug-smuggling; 41 people have been beheaded in Saudi Arabia this year. Fifty thousand Australian sheep were stranded in a ship in the Persian Gulf after being rejected by their Saudi buyers as too