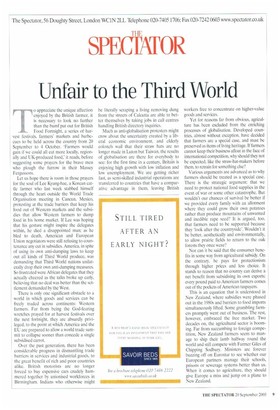 Unfair to the Third World

o appreciate the unique affection enjoyed by the British farmer, it is necessary to look no further than the bumf put out for British Food Fortnight, a series of harvest festivals, farmers' markets and barbecues to be held across the country from 20 September to 4 October. 'Farmers would gain if we could all eat more locally, regionally and UK-produced food,' it reads, before suggesting some prayers for the brave men who plough the furrow in their Massey Fergussons.

Let us hope there is room in those prayers for the soul of Lee Kyung-hae, a Korean cattle farmer who last week stabbed himself through the heart outside the World Trade Organisation meeting in Cancun. Mexico, protesting at the trade barriers that keep his food out of Western markets and the subsidies that allow Western farmers to dump food in his home market. If Lee was hoping that his gesture might inspire the delegates within, he died a disappointed man; as he bled to death, American and European Union negotiators were still refusing to countenance any cut in subsidies. America, in spite of using its own anti-dumping laws to keep out all kinds of Third World produce, was demanding that Third World nations unilaterally drop their own anti-dumping measures. So frustrated were African delegates that they actually cheered as the talks broke up early, believing that no deal was better than the settlement demanded by the West.

There is only one significant obstacle to a world in which goods and services can be freely traded across continents: Western farmers. Far from being the God-fearing wretches prayed for at harvest festivals over the next fortnight, they are absurdly privileged, to the point at which America and the EU are prepared to allow a world trade summit to collapse sooner than concede a single subsidised carrot.

Over the past generation, there has been considerable progress in dismantling trade barriers in services and industrial goods, to the great benefit of rich and poor countries alike. British motorists are no longer forced to buy expensive cars crudely hammered together by unionised workforces in Birmingham. Indians who otherwise might be literally scraping a living removing dung from the streets of Calcutta are able to better themselves by taking jobs in call centres handling British directory inquiries.

Much as anti-globalisation protesters might crow about the uncertainty created by a liberal economic environment, and elderly colonels wail that their straw hats are no longer made in Luton but Taiwan, the results of globalisation are there for everybody to see: for the first time in a century, Britain is enjoying high growth with low inflation and low unemployment. We are getting richer fast, as semi-skilled industrial operations are transferred to countries that have a comparative advantage in them, leaving British workers free to concentrate on higher-value goods and services.

Yet for reasons far from obvious, agriculture has been excluded from the enriching processes of globalisation. Developed countries, almost without exception, have decided that farmers are a special case, and must be preserved as items of living heritage. If farmers cannot keep their business afloat in the face of international competition, why should they not be expected, like the straw-hat-makers before them, to retrain for something else?

Various arguments are advanced as to why farmers should be treated as a special case, There is the strategic argument: that we need to protect national food supplies in the event of war or some other catastrophe. But wouldn't our chances of survival be better if we provided every family with an allotment where they could grow their own potatoes rather than produce mountains of unwanted and inedible rape seed? It is argued, too, that farmers need to be supported because they 'look after the countryside'. Wouldn't it be better, aesthetically and environmentally, to allow prairie fields to return to the oak forests they once were?

Nor can it be said that the consumer benefits in some way from agricultural subsidy. On the contrary, he pays for protectionism through higher prices and less choice. It stands to reason that no country can derive a net benefit from subsidising its own exports: every pound paid to American farmers comes out of the pockets of American taxpayers.

This is an equation that is understood in New Zealand, where subsidies were phased out in the 1980s and barriers to food imports simultaneously lifted. Some grumbling farmers promptly went out of business. The rest, however, embraced the free market. Two decades on, the agricultural sector is booming. Far from succumbing to foreign competition, New Zealand farmers seem to manage to ship their lamb halfway round the world and still compete with Farmer Giles of Chipping Sodbury. Ministers are forever buzzing off on Eurostar to see whether our European partners manage their schools, prisons or sewerage systems better than us. When it comes to agriculture, they should give Europe a miss and jump on a plane to New Zealand.