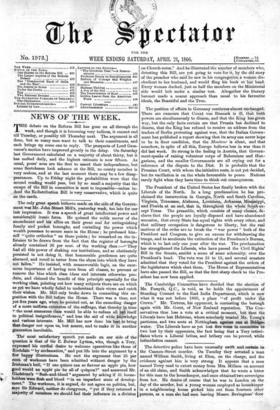 Page 1, 21 April 1866 — The President of the United States has finally broken with
Close

The President of the United States has finally broken with

the Liberals of the North. In a long proclamation he has pro- claimed the insurrection in Georgia, North and South Carolina, Virginia, Tennessee, Alabama, Louisiana, Arkansas, Mississippi, and Florida at an end, that is, throughout the whole. South ex- cept Texas. The preamble, which consists of many clauses, de- clares that the people are loyally disposed and have abandoned• secession, that every State has equal rights with every other, and that military occupation is dangerous to liberty, but the real motives of the order are to break the " war power " both of the President and Congress, to give an excuse for withdrawing the troops, and to accelerate the extinction of the Freedmen's Bureau, which is to last only one year after the war. The proclamation has strengthened the Liberals, who have passed the Civil Rights' Bill in the Senate, amidst a scene of some solemnity, over the President's head. The vote was 33 to 15, and several senators admitted that they voted for the President against the orders of the legislatures which elect them. The House of Representatives have also passed the Bill, so that the first sharp check to the Pre- sident has now been applied.