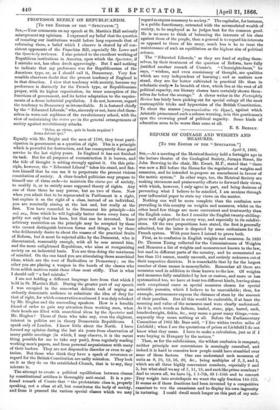 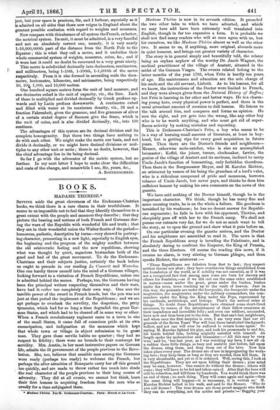 REFORM OF COINAGE AND WEIGHTS AND MEASURES.

[To THE EDITOR OF THE " SPECTATOR."] April 6, 1866. Sin,—At a meeting of the Metrical Society held a fortnight ago in the lecture theatre of the Geological Society, Jermyn Street, Sir John Bowring in the chair, Mr. Ewart, M.P., stated that "there was now a Bill before the House for the regulation of weights and measures, and he intended to propose an amendment in favour of the metric system." In other ways, too, the Metrical Society are making strenuous and praiseworthy efforts to forward their views, with which, however, I only agree in part, and being desirous of preventing what I believe to be mischief, I am anxious through your influential paper to state my views on the matter.

Nothing can well be more complete than the confusion now prevailing in this couqtry on weights and measures, whilst on the other hand few things• are more convenient and trustworthy than the English coins. In fact I consider the English twenty-shilling- piece well nigh perfect in every way, and especially in its subdivi- sions. Of the two propositions here stated, the first is generally admitted, but the latter is disputed by some enthusiasts for the French system. With your leave I intend to prove both.

First, as to confusion in English weights and measures. In 1820 Dr. Thomas Young collected for the Commissioners of Weights and Measures a list of weights and measures not known to the law, but used in different parts of the country, and he enumerated no less than 154 names, mostly uncouth, and entirely unknown out of their respective districts. It is remarkable that by far the largest number of these names is monosyllabic. Remember all these are measures used in addition to those known to the law. Of weights and measures fully established by law or custom, and more or less systematized too, we have at least ten different kinds, leaving alone such exceptional cases as special measures chosen for special scientific pursuits, which I believe to be unavoidable; thus, for example, astronomers•express the distance of stars by the amount of their parallax. But all this would be endurable, if at least the meaning and value of the measures used were clearly understood. As it is, such words as fathom, bushel, stone, pipe, barrel, sack, hundredweight, firkin, &c., may mean a great many things,—con- sequently they mean nothing at all. Before the Parliamentary Committee of 1862 Mr. Baas said, " I live within twelve miles of Lichfield ; when I see the quotations of prices at Lichfield I do not know what they mean. I have to make a calculation, just as if I were buying in Hungary by the metzen."

• Then, as for the subdivisions, the wildest confusion is rampant; neither principle nor convenience is seemingly consulted, and indeed it is hard to conceive how people could have stumbled over some of these factors. One can understand such measures of units as 8, 10, 12, 16, 20, &c., being multiples of 2, 3, and 5, which are all three highly convenient numbers, especially 2 and 5, but what shall we say of 7, 11, 13, and suchlike prime numbers? And to crown all, we have 54, 1 1-7th, 69 1-15th and to convert

Troy weight into avoirdupois we want the ugly fraction 144-175. J It seems as if these fractions had been invented by a competitive examiner to vex the examinees and to display his own ingenuity in torturing. I could dwell much longer on this part of my sub-

jest, but your space is precious, Sir, and I forbear, especially as it is admited on all sides that there now reigns in England about the greatest possible confusion with regard to weights and measures.

Now compare with thisabsence of all system theFrench, or better, the metrical system. Its unit, it must be admitted, is a very fanciful and not an absolutely correct one, namely, it is very nearly 1-10,000,000th part of the distance from the North Pole to the Equator ; this is what they call a metre, and it underlies their whole commercial system of weights, measures, coins, &c., and if it were lost it could no doubt be recovered to a very great nicety.

This metre is subdivided decimally into decimetres, centimetres, and millimetres, being 1-10th, 1-100th, 1-1,000th of the metre respectively. From it is also formed in ascending scale the deca- metre, hectometre, kilometre, and miriametre, being respectively 10, 10(1, 1,000, and 10,000 metres. One hundred square metres form the unit of land measure, and one decimetre cubed is the unit of capacity, viz., the litre. Each of these is multiplied and divided decimally by Greek prefixes up- wards and by Latin prefixes downwards. A centimetre cubed and filled with water at its maximum density, viz., 39 and a fraction Fahrenheit, gives the gramme, and five grammes of silver of a certain stated degree of fineness give the franc, which is the unit of coins, and is also divided decimally, viz., into 100 centimes.

The advantages of this system are its decimal division and its complete homogeneity. But these two things have nothing to do with each other. We might make the metre our basis, and not divide it decimally, or we might have decimal divisions or mul- tiples to any other unit or units ; there is no doubt, however, that the chief advantage lies in its being decimal.

So far I go with the advocates of the metric system, but no further. In my next letter I hope to make clear the difficulties and costa of the change, and meanwhile I am, Sir, yours, &c., A. SozotErtscnzrst.