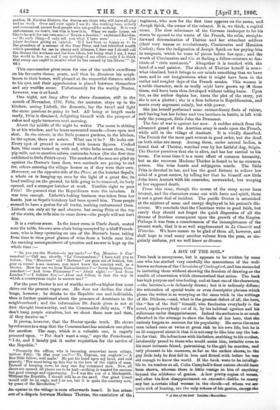 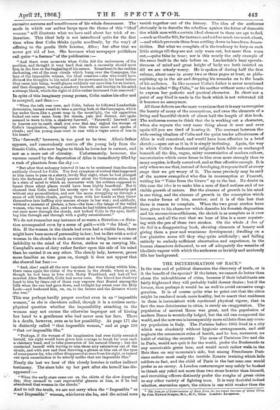 This book is anonymous, but it appears, to be written by some one who has studied very carefully the mannerisms of the well known authoress.of the Chronielesof Carlingford,.and has succeeded in imitating them without showing the freedom of dra.wingtor the wealth of observation whieh.characterized that series. The• book has high purpose and true feeling; and at least one of the characters, —the heroine's,—is delicately drawn; but it is tediously diffuse; the reiteration of special traits or' even descriptive phrases which please the writer is as wearying as the same trick in the writings of Mr. Dickens,—and, what is the greatest defect of all, the hero, the -" Son of the Soil " himself, who fascinates everybody in the novel, repels everybody out of it, by his habitual egotism and• his sullenness under disappointment.. Indeed the authoress issonsuch absorbed in the attempt to show the faults of her hero, that, ehe entirely forgets to account for his popularity. He saves the same man indeed once or twice at great risk to his own life,, but he is so ill-tempered about it that it is not easy. tolikelim any the beti- ter for that. He is fractious with his father, snubbing thins mother, intolerably proud to those-who would assist him, irritable even to his most intimate friend, patronizing to the-girl he' marries,, and only pleasant in his manners, as far as the author shows, to the gay little lady he: first fell in love and flirted: with. before he was old enough to know. the world. the. book were-to. he.intelligi- ble to its readers at all, Colin Campbells,should.have been shown, whereas there is little:. vestige in. him of: anything , beyond. the selfishness of genius, lic.few pretty copies. of versa, aod. after hie first disappointment, an excessive-dislike to, maw any but a.certain ideal woman in. the oloadk—of; whom. ww.are quite sick of hearing, are the only, tokens of his ganius,,exefiatsthe * A Son of the.Soil. London : MAtomilltru excessive soreness an.deensitiveness or his whole demeanour. The mode in whiCh our author harps upon the theme of this "-ideal' woman" will illustrate what we have said about her trick of -re- iteration, This 16,4 is not iittrodtcect quite for the first tithe when first Colin thinks (quite needlessly; by • the way). of offtring to the gentle little heroine, Alice; but after that we never get rid of her. She becomes what newspaper publishers call quite. ", a. foetus" 'of the-publieation-:-- " And there were. momenta when Colin. felt the serionsnesa tlie positiom_and.thought. it very hard. that_ such_ a necessity should meet hirmin the face aLthe.beginnuigaLhis_career.. Sometimes laths:ism-idea, dzu-kaning,,ont.of.the.rosy thuds which hung.over the Campagpa, the, face of the impossible woman, the ideal creature—she. who could have disineettbe thoughts in his mind. and the movements in hiS heart before, they came into being, would glance suddenly out upon him.for an instant,_ and.then disappear, waving a.shadawy farewell,,a.nd loaving.iu.bis mind a straugmblank, which,theaight ofalice rather increased than ramovecL" Iii spite of this imaginary young person; Colin-makeshis.offerand is accepted; and then :—" When the talk wag over'. and. Colin,. before he lollowod Lauderdale downstairs,.turned round.totalwmparting look.at.thoCampagna, which lay under thornlike- a. great: map. in. the moonlight„. the old. apparition looked out once more tram,. the clouds,. pale: and distant,: and again seemed to•wave to. hint a shadowy farewell.. ' Farewell! farewell! not in heaven nor iumuth :shall you, ever find. me,' sighed the. woman of: Colin's imagination,. dispersing into thin white, mists and' specks: of clouds; and the. young;mannvent to rest with.a.vague sense of loss in. his-heart."

The-' fitrewell;'-however,. is too good' to' bet e. Alice's-father appears, and remorselessly carries off' the young lady from the frantic Colin,.whonow beginsto think he-loves her in earnest, and. not as a, mere, act of. chivalry; Unfortunately; however, the' -vacuum caused'by-the deportation-of Alice kimmediately fillisdhy- a rush. of phantom frorathe sky.:— " Bat af ter that unhappy interval it has to , be confessed that the skies - suddenly cleared for Colin. The first symptom,ofrevivcdthathappened. to him came tepass on aatarry, lovely May night,,when. he had plunged into the darkness of the lonely quarter about the Colosseum alone, and nn mstate of mind to which an. encounter- with the robbers supposed to haunt these silent places would. have been highly beneficial. But it chanced that Colin raised his moody eyes to the sky, suddently and without any premeditation, and saw the. moon strugglino:' up through a maze of soft white clouds, parting them with her hands as they threw- themselves into baffling airy masses always in her -way ; and suddenly, without a moment of preface, a face—the face—the image of the veiled, woman; who was not Alice, and to whom he had bidden farewell, gleamed out once more through the clouds, and looked Colin in the eyes, thrill- ing him through and through with a guiltyastonishment."

We do not remember any instance of so warm a flirtation—a flirta- tion accompanied even bra sense of guilt—with " the Ideal," as

this. lithe woman, in the clouds even. had .a visible face, there might have been more of. personality. in her.; but. to flirt with a veiled woman in. the clouds to such:an extent as to bring, home a sense of infidelity-to- the mind. of the flirter, strikes- us as carrying Mr.. Campbell's sense of duty rather farther uponthis side of. his mind than he carried it on any other. The cloudy lady, however, grows- more familiar. as, time goes on,, though it does not appear that. the: showed her face .:—

"And alas ! amid all the.new impulses that were rising within him; there came again the vision of the woman in the clouds, whom as yet, though he had beau in love with Matty Frankland, and had all but married Alice Meredith; Cohn had never seen: She kissed her shadowy hand:to him by times out of those rosy vapours that floated among:the hills when the sun had.gme down, and-twilight lay sweet over the Holy Loch—and beckoned him, on, on,.to the future and-the distance where she was."'

This was perhaps hardly proper conduct even in an " impossible woman," as she is elsewhere called; though it is a curious meta- phy_sibat question whether the: impossibility attaching to the woman may. not excuse the otherwise improper act of' kissing her hand to a gentleman who had never seen her face. There is a doubt, however, even as to her possibility. At page 171 she is distinctly called " that impossible woman," and at page 198 "that not impossible She."

"Perhaps, if the woman of his imagination had ever fairly revealed herself, the sight would have given him courage to break for ever such avisionary bond, and to-take possession of his natural liberty ; but she contented herself, with waving to him, those airy salutations out of• the clouds, and.witnnew and thmwing.a.glance at.him out. of the eyes of some passer-by, who either disappeared at once from his sight, or turned out upon examination to be utterly'unlike•that not impossible She."

Nearly. the last we hear of this cloudy heroine is rather indirect testimony. The stars take up her part after she herself has dis- appeared :—

" When the early, stars came out on the skirts. of_ the slow departing day, they seemed' to cast- reproachful glances at him; as if he had abandoned that womandirthe clouds."

And to tell the truth, we are not' sorry when the " Impossible " or "not 'impossible " woman,. whichever she.be, and. the actual man

vanish together-out of the history. The idea of' the authoress obvionslyissto describe the rebellion against the fetter of' domestic ties which men-with a certain ideal element in them are aptto feel; —such as (loethe felt,-for instance, and said-so much too much about, —and-which-prevents them from settling down to humdrum dbmes- ticities: Bet what-we compltdn of is the tendency to harp on such little strings-till they-are not only worn out; but more than worn- out,—quite false in- tone; nor is this nearly the only example of the same-fault-hi the tale. befbre us. Lauderdale's. hazy specula- tiveness- of nritid''and great height of body are both insisted on till we are- utterly-weary-. He is spoken of ' during half' the first volume; about-once in- every,twoorthree pages at least; as philo- sophizing up in the air-and dropping his remarks-on to the heads of his audience. In like manner Colin's father is never mentioned but he is-called ".Big-Colin," or hismother without- somsadjective to- express her-pathetic and poetical character. ra short not a pointof any-lrindia-made in the book which is-not' reiterated' till it- becomes au annoyance: All these defects-are-the morsvexatibmrthatitikeasy to.recognize the. beauty of-marry of thsconceptiOns; and-even' theelements of a. living andbeautifal-sketch- of about halt-the length' of this book. The authoress seemsto think-that she is-working-out a character; when she repeats' the very- same thing- about its over and over againitill you' are tired of hearing it. The contrast between- the widerovingidealiemr of' Colin-and the quiet tender adhesiveness of Alice- is well; conceived, and'would have been effeetive- in a brief sketch-;=spun out as it is; it is simply-irritating. Again, the way in which fimdamental religious faith holds-on unchanged beneath all the thin, vague, misty-uncertainties of modern culture, uncertainties wiiieh come home to- hint even• more strongly than to many-sceptics; is finely conceived; and at fltst-effectiveenough. It is only whenswe see that, instead of develbpingitrepeats itself at every- stage that- we get-weary of it. The same-precisely may be said or the narrow evangelical who dies in. consumption- at Frascati, writing, his." Voice from the Grave " up to the last. Nb• doubt in this case the idea into make him-a man of fixed notions:and of no' visible growth of nature. Bit-the absence of growth in his mind' is one thing, and the absence- of growth- in the conception which• the reader forms of him, another; and it is of this last that there- is reason to complain. When the two great strokes have' been given to his character which describe his feverish dogmatism and his unconscious selfishness, the sketch-is as complete as it ever becomes, and-all the-rest that we hear of him is a mere repaints.- ing-witIr the pen- of these two strokes. On the whole- A Son of the Soil is a disappointing- book, showing elements of beautyand- giving them a poor-and wearisome development-; dwelling on a few' plaintive notes till' they-ring quite artificially-;- and failing entirely- to embody sufficient observation and. experience, in the human characters- delineated, to-set off adequately the-wreaths of idealistic vapour with which the authoress so lavishly and anxiously fills her background.