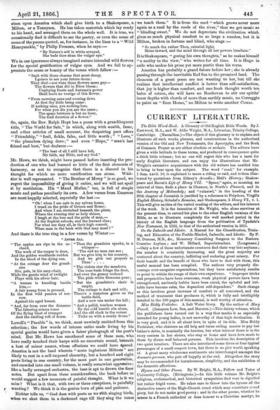 The Bible Word-Book. A Glossary of Old English Bible Words. By J. Eastwood, M.A., and W. Aldis Wright, M.A., Librarian, Trinity College, Cambridge. (Macmillan.)—The object of this glossary is to explain and illustrate all such words, phrases, and constructions in the authorized version of the Old and New Testaments, the Apocrypha, and the Book of Common Prayer as are either obsolete or archaic. The editors have given a wide latitude to these terms, and produced in consequence quite a thick little volume; but no one will regret this who has a taste for early English literature, and can enjoy the illustrations that Mr. Wright's extensive acquaintance with the old writers has enabled him to bring to bear upon the subject. The word "road," for example, 1 Sam. xxvii. 10, is explained to mean a riding or raid, and is then illus- trated by quotations from Sidney's Arcadia; Hall's History; Shakes- peare and Bacon's Life of Henry VII. "Space," again, as meaning an interval of time, finds a place in Chaucer, in North's Plutarch, and in the Anatomy of Melancholy; and "rainated," in the heading of the 39th chapter of Jeremiah is justified by a reference to Polydore, Virgil's English History, Grindal's Remains, and Shakespeare, 3 Henry VI., v. 1. This will give an idea of the varied reading of the editors, and the interest of the work. It is the intention of Mr. Wright, who alone survives at the present time, to extend his plan to the other English versions of the Bible, so as to illustrate completely the well marked period in the history of the English language from the publication of Tyndale's New Testament, in 1525, to that of the authorized version in 1611.