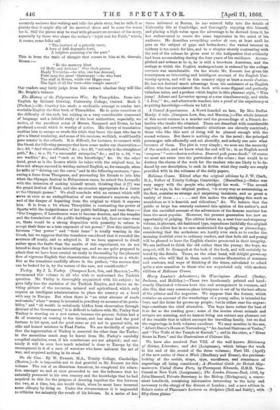 recommend this volume to all who wish to understand the Turkish question. Mr. Farley is thoroughly acquainted with his subject ; he goes fully into the statistics of the Turkish Empire, and draws an in- viting picture of the resources, mineral and agricultural, which only require an intelligent administration to place the country on a level with any in Europe. But when there is "an utter absence of roads and canals," when "money is invested in jewellery on account of its porta- bility," and " all wealth is sedulously hidden from observation through distrust of the Government," it is difficult to believe with Mr. Farley that Turkey is starting on a new career, because the present Sultan had a fit of economy on coming to the throne, and has since had the good fortune to hit upon, and the good sense as yet not to quarrel with, an able and honest minister in Fuad Pasha. We are decidedly of opinion that the regeneration of Turkey is reserved for other than the Turks ; in the meantime much may be learnt from Mr. Farley's carefully compiled statistics, even if his conclusions are not adopted ; and cer- tainly it will be seen how much mischief is done to Europe by the encampment in it of a race of warriors who have unlearnt the art of war, and acquired nothing in its stead.