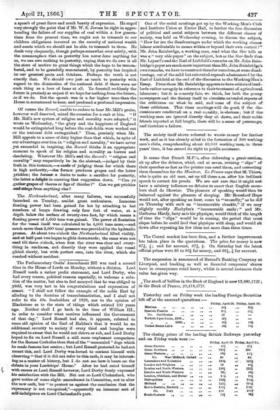 The Parliamentary Oaths' Amendment Bill was read a second' 'time

in the House of Lords on Monday, without a division. Lord Bernell' made a rather prolix statement; and Lord Derby, who had every reason, political reasons especially; to welcome a solu- tiOn of'the matter, 'but also-to feel annoyed that lie was obliged' to yield; was. very tart in his congratulations and expressions of -assent. " shall: not follow the example. of' the noble Earl by -alluding to the doctrine of transubstantiation, and I. shalt not. refer to the 40s. freeholders of 1829', nor to the opinion of Blackstone as to the state of things which. existed 100 years Ago. Neither shall I go back. to the time of William III.,. in order to consider what motives influenced the Government of that day." Lord Russell had also, it appears,. referred. to. some old. opinion of. the Earl _of Halifax:a that. it would be no -additional security to society if every thief and. burglar were. required to swear that he would-not. thieve or. rob,.and Lord Derby hoped.to fix on..LordRusselL a still. mornunpleasant comparison. for the,Roman Catholics than thatof the unmuzzled " dogs which he made famous. last session.; but Lord Russell protested he had.not meant this,. and. Lord Derby was-forced. to content himself with. observing "-that-if it did.not refer to:thie oath, it may. be interests. ing:as.a.matter:of history,. but I . do not see' how it bears -ow the debate in your Lordships'. Houses" After- he had sated himself with sneers at Lord, Riissellthowever, Lord Derby freely expressed his satisfaction with the -Bilh. Bit mob so Lord Chelmsford; who gave notice of some slight amendment in:Committee, not-to alter the new oath; but " to protect us. against the conclusion that the supremacy is not recognized;"—apparently an- innocent sort of self-indulgence on Lord- Chelmsford's .part: