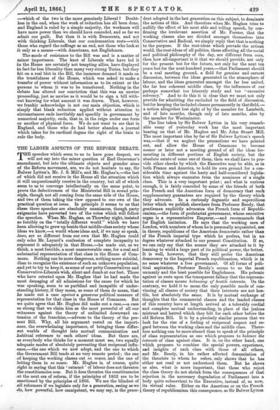 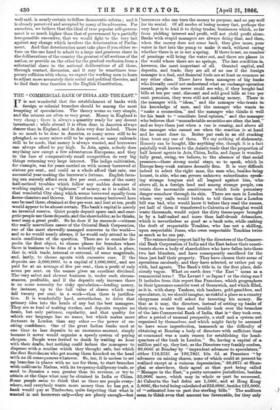 THE LARGER ASPECTS OF THE REFORM DEBATE.

THE speeches which seem to us to have gone deepest, we will not say into the minor question of Earl Grosvenor's amendment, but into the ultimate objects and grander aims of the Reform movement, are, we do not hesitate to say, Sir Bulwer Lytton's, Mr. J. S. Mill's, and Mr. Hughes's,—the last of which did not receive in the House all the attention which it will unquestionably receive in the country, but all of which seem to us to converge intellectually on the same point, to prove the defectiveness of the Ministerial Bill in sound prin- ciple, though not all coming from the same side of the House, and two of them taking the view opposed to our own of the practical question at issue. In principle it seems to us that 4hese three speeches are absolutely unanimous, though party exigencies have perverted two of the votes which will follow -the speeches. When Mr. Hughes, on Thursday night, insisted so forcibly on the " totally different world " which we have been allowing to grow up beside that middle-class society whose ideas we know,—a world whose ideas and, if we may so speak, -laws, are so different from our own that Mr. Hughes could .only echo Mr. Layard's confession of complete incapacity to represent it adequately in that House,—he made out, as we think, a most forcible, a most unanswerable case, for a real and • substantial representation of that, class in the House of Cora- .mons. Nothing can be more dangerous, nothing more suicidal, than to recognize the existence of such an unknown population, and yet to try to keep it, as some of our petty Conservatives and Conservative-Liberals wish, silent and dumb at our feet. Those who have retorted upon Mr. Hughes that he had made the most damaging of all admissions for the cause for which he was speaking, seem to us purblind and incapable of under- -standing history, if they mean, as some of them do mean, that lie made out a case against a generous political measure of representation for that class in the House of Commons. But we quite agree that Mr. Hughes did make out a case,—a case so strong that we claim him as the most powerful of all our witnesses against the theory of unlimited downward ex- tension of the franchise,—adverse to the theory of the pre- sent Bill. Why, all his argument rested on the import- ance, the overwhelming importance, of bringing these differ- Ant worlds of thought into mutual communication and habitual reference to each others' ideas. But there are, as everybody who thinks for a moment must see, two equally -adequate modes of absolutely preventing that reciprocal influ- -ence,—the one which we now adopt, and the one to which the Government Bill tends at no very remote period ; the one -of keeping the working classes out en masse, and the one of :letting them in en masse. Mr. Hughes is, of course, quite right in saying that this cataract ' of labour does not threaten the constituencies now. But it does threaten the constituencies at the next era of reform, if the principles of 1832 are to be .sanctioned by the principles of 1866. We are the blindest of all reformers if we legislate only for a generation, seeing as we do, how powerful, how omnipotent, we may say, is the prece-

dent adopted in the last generation on this subject, to dominate the actions of this. And therefore when Mr. Hughes tries to nullify the effect of his most able and telling speech, by con- firming the irrelevant assertion of Mr. Forster, that the working classes also are divided amongst themselves into Conservative and Radical, we simply reply that that is nothing to the purpose. If the root-ideas which pervade the artisan world, the root-ideas of all politics, those affecting all the social and political philosophy of the day, are different from ours, then how all-important is it that we should provide, not only for the present but for the future, not only for the next ten years but for the next hundred years,—that Parliament should be a real meeting ground, a field for genuine and earnest discussion, between the ideas generated in the atmosphere of labour, and the ideas generated amongst the far less united, the far less coherent middle class, by the influences of our perhaps somewhat too leisurely study and too " excessive solvency." And to do this it is clear that we must not only provide for admitting the excluded to the field of discussion, but for keeping the included classes permanently in that field,— a notion altogether lost sight of by the member for Lambeth, and of late months, though only of late months, also by the member for Westminster.

The line taken by Sir Bulwer Lytton in his very remark- able essay of yesterday week has the most important bearing on that of Mr. Hughes and Mr. John Stuart Mill. The most important idea by far of Sir Bulwer Lytton's speech was,—that if we neglect the precautions we have pointed out, and allow the House of Commons to become sooner or later not a meeting ground of all the ideas fer- menting in different portions of English society, but the absolute estate of some one of them, then we shall have to pro- vide other checks by which the Executive may be able, as in both Fiance and America, to hold its own ground for a con- siderable time against the hasty and half-considered legisla- tion which always emanates from the nominees of a single class. This is a very important point ; and what is curious enough, it is fairly conceded by some of the friends of both the French and the American form of democracy that such supplementary guarantees are required by the theory which they advocate. In a curiously dogmatic and supercilious letter which we publish elsewhere from Professor Beesly, that gentleman explicitly advocates the French form of Republi- canism,—the form of proletariat government, whose executive organ is a representative Emperor,—and recommends that for English imitation. He says that the working men of London, with numbers of whom he is personally acquainted, are in theory, republicans of the American democratic rather than of the French imperial type which he prefers, but in no- degree whatever attached to our present Constitution. If so, we can only say that the sooner they are attached to it by learning to wield a large part of its political power, the better. It is well, however, that they still prefer the American democracy to the Imperial French republicanism, which is in no sense whatever a free government. Of all forms of poli- tical aspiration, Professor Beesly's seems to us the most unmanly and the least possible for Englishmen. His polemic against us rests upon the transparent fallacy that the represen- tation of classes means balancing of hostile interests. On the contrary, we hold it to mean the only possible mode of con- vincing all classes of society that their interests are not hos- tile, but absolutely the same. It is by mutual exchange of thoughts that the commercial classes and the landed classes of this country have at length arrived at a tolerably cordial and complete mutual understanding, in place of the jealous mistrust and hatred which they felt for each other before the old Reform Bill. It is by a precisely similar process that we look for the rise of a feeling of reciprocal respect and re- gard between the working class and the middle class. There- fore nothing can be more absurd than to speak of the principle of class representation as one which proposes to balance the interests of class against class. It is, on the other hand, one which proposes to combine the special powers, experience, and insights of each class with those of all others, and Mr. Beesly, in his rather affected denunciation of the theorists to whom he refers, only shows that he has either not read or not understood them. But he shows us also, what is more important, that those who reject the class theory do not shrink from the consequences of that rejection in the necessary degradation of Parliament into a body quite subservient to the Executive, instead of, as now, its virtual ruler. Either on the American or on the French theory of republicanism this consequence, as Sir Bulwer Lytton well said, is nearly certain-to follow democratic reform ; and it is already perceived and accepted by many of its advocates. For -ourselves, we believe that the ideal of true popular self-govern- ment is so much higher than that of -government by a partially irresponsible executive, that we would fight to the very last spinet any-change which involves the deterioration of Parlia- ment. And -that deterioration must take place if you either re- 'fuse on the one hand to admit to a large and generous share in the-deliberations of the country the greatest of all sections of the nation, •or provide on the other for the gradual exClusion from a substantial share in the national deliberations of all those, through contact, discussion, and it may be sometimes tem- porary collision with Whom, we expect the working men to learn to adjust more accurately their social and political theories, and to find their true function in the English Constitution.