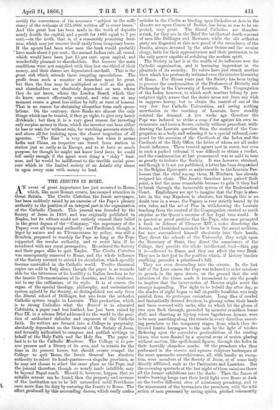 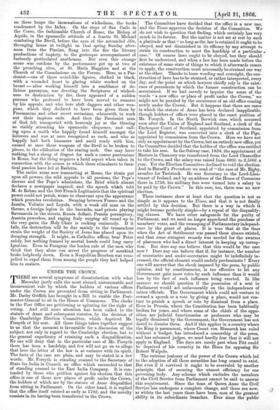 They are even descending into the streets. In the last half of the Lent season the Pope was induced to order missions to preach in the open streets, on the ground that the evil infection of the times made it incumbent to stir the people to implore that the intervention of Heaven might avert the scourge impending. The sight to be beheld day after day, as the shades of night began to fall on public localities, was truly painful, from its grotesque caricature. 'Long files of cowled and fantastically dressed devotees, in gloomy robes, their heads and faces covered with sacks, slits in which let the gleam of two eyes flash through, ,preceded by monster crucifixes borne aloft, and chanting at tip-top voices lugubrious hymns, were to be seen marching along the streets in every direction, escort- ing preachers to the temporary stages, from which they de- livered frantic harangues to the mob by the light of torches flickering upon the convulsive gesticulations of the ranting friars, who were flanked by a spectral array of mutes, glaring without motion, like spell-bound figures, through the holes in their horridly shapeless masks. Of the preachers who thus performed in the streets and squares religious burlesques of the most spasmodic convulsiveness, all, with hardly an excep- tion, were members of the Society of Jesus, or of some body directly affiliated, such as the Passionists and 'Lazariste. But the crowning spectacle of the last night of these missions-threw all the former exhibitions into the shade. Then the flames of twelve burning heaps cast their lurid light over Rome at dusk on the twelve different sites of missionary preaehing, and to the amazement of the bystanders the preachers, with the wild action of men possessed by raving spirits, pitched vehemently. on these heaps the incarnations of wickedness, the books condemned by the Index. On the steps of San Carlo in the Corso, the fashionable Church of Rome, the Bishop of Aquile, in the spasmodic attitude of a frantic St. Michael combating the Devil, before the eyes of the astounded elite, thronging home at twilight on that spring Sunday after- noon from the Pincian, flung into the fire the literary productions of impiety, to the grotesque accompaniment of furiously gesticulated anathemas. But even this strange scene was outdone by the performance got up at two of the preaching sites, at St. Maria Maggiore and at the Church of the Consolazione on the Forum. Here, as a Pas- sionist—one of those weird-like figures, clothed in black, with a wounded heart in glaring white worked on the breast — after working himself into a semblance of de- lirious paroxysm, was devoting the Scriptures of wicked- ness to destruction by fire, there appeared of a sudden persons who professed to have been moved to remorse by his appeals, and who bore aloft daggers and other wea- pons, which they declared to have been given them by Freemasons and other secret sectarians, wherewith to work out their impious ends. And then the Passionist man of God felt transported with heavenly joy at the blessing so visibly attending his spasmodic eloquence, and call- ing upon a smith who happily found himself amongst the loiterers and was at once recognized as such, and who as happily had both hammers and anvil ready with him, caused at once these weapons of the Devil to be broken to pieces, to the edification of the staring mob. One may have nothing but a shrug of disgust for such a coarse pantomime in Rome, but the thing acquires a lurid aspect when taken in connection with the scenes to which these stimulants to fana- tical passion have led at Barletta.

The entire scene now transacting at Rome, the strain put upon all powers, the wild appeals to all passions, the Pope's decrees and the Pope's admissions, the Brief which almost declares a newspaper inspired, and the speech which told M. de /khan and the 300 French Legitimists that the spiritual power could not perish, wears to observant eyes the appearance which precedes revolution. Swaying between France and the Jesuits, Voltaire and Loyola, with a weak old man on the throne, a foreign legion in the barracks, mad priests playing Savonarola in the streets, Russia defiant, Prussia peremptory, Austria powerless, and raging Italy surging all round up to the very gates, the Holy Chair is rocking ominously. If it falls, the destruction will be due mainly to the tremendous strain the weight of the Society of Jesus has placed upon its decaying strength. It might, as Catholics affirm, bear Peter safely, but nothing framed by mortal hands could long carry Ignatius. Even in Paraguay the leaden rule of the men who think that they alone can arrest the progress of mankind broke helplessly down. Even a Neapolitan Bourbon was com- pelled to expel them from among the people they had helped him to enslave.