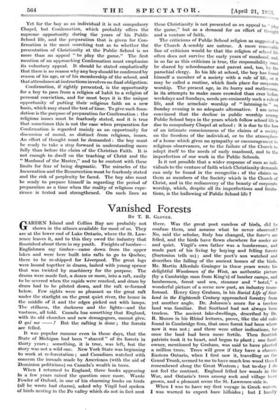 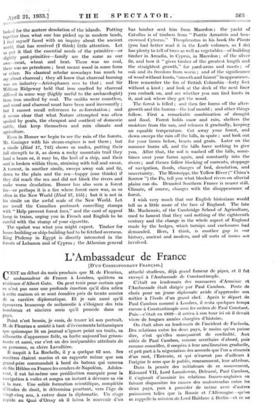 GARDEN Island and Collins Bay are probably not shown in the atlases available for most of us. They are at the lower end of Lake Ontario, where the St. Law- rence leaves it, and to this they owed the industry that flourished about them in my youth. Freights of lumber— Englishmen say timber—came down from the upper lakes and were here built into rafts to go to Quebec; there to be re-shipped for Liverpool. The great logs were bound together in drams, lashed with young spruce that was twisted by machinery for the purpose. The drams were made fast, a dozen or more, into a raft, easily to be severed when the rapids were 'reached, and dram by dram had to be piloted down, and the raft re-formed below. Few sights were so pleasant as the great raft under the starlight on the great quiet river, the house in the middle of it and the edges picked out with lamps: The stillness, the darkness and the lights—and the vastness, all told. Canada has something that England; with its old churches and new demagogues, cannot give: 0 qui me — ! But the rafting is done ; the forests are felled.

It was popular rumour even in those days,- that the State of Michigan had been " shaved " of its forests in thirty years ; something, it is true, was left; but the story was not a wild one. New York State was beginning to work at re-forestation ; and Canadians watched with concern the inroads made by Americans (with the aid of Dominion politicians) on Canada's wealth in trees.

When I returned to England, three books appearing in a few years raised the question once more. Warde Fowler of Oxford, in one of his charming books on birds (all he wrote had charm), asked why Virgil had spoken of birds nesting in the Po valley which do not in fact nest there. Was the great poet careless of birds, did he confuse them, and assume what he never observed ? No, said the scholar, Italy has changed, the forests are felled, and the birds have flown elsewhere for cooler air and quiet. Virgil's own father was a lumberman, and made part of his living by buying and felling forests (Suetonius tells us) ; and the poet's son watched and describes the falling of the ancient homes of the birds. Mr. Martin Allerdale Grainger in these years wrote his delightful Woodsmen of the West, an authentic picture (by a Cambridge man from King's) of lumber camps, and lumbermen, • forest and sea, steamer and " hotel," a wonderful picture of a scene now past, an industry trans- formed. Henry Grey Graham, in his Social Life of Scot- land in the Eighteenth' Century approached forestry from yet another angle. Dr. Johnson's scorn for a• treeless Iand was familiar. But Scotland had not always been treeless. The ancient lake-dwellings, described by Dr. R. Munro in his Rhind lectures, prove, like • the old oaks found in Cambridge fens, that once forest had been where now it was not ; and there were other indications, for once the land had been more fertile. -Then Scottish patriots took it to heart, and began to plant ; one land- owner, mentioned by Graham, was said to have planted a million trees. Trees will grow if they have a chance. Eastern Ontario, when I first saw it, travelling on the Grand Trunk, seemed to me to have much less wood than I remembered along the Great Western ; but to-day I do not feel the contrast. England felled her woods in the War, and Ontario's trees among rock and village have grown, and a pleasant scene the St. Lawrence-side is.

When I was to have my -first voyage in Greek waters, I was warned to expect bare hillsides ; but I hardly looked for the austere desolation of the islands. Putting together then what one has picked up in modern lands, I find myself faced with an inquiry about the ancient world, that has received (I think) little attention. Let us put it that the essential needs of the primitive—or slightly post-primitive—family are the same as our own—meat, wheat and heat. There • was no coal, there was no petroleum ; heat meant wood in some form or other. No classical scholar nowadays has much to sty about charcoal ; they all- know that charcoal burning was an industry—Aristophanes sees to that ; and Sir William Ridgeway held that iron smelted by charcoal differed in some way (highly useful -to the archaeologist) from iron smelted by coal. The smiths were countless, and wood and charcoal must have been used incessantly ; but I cannot recall references to re-forestation ; and it seems clear that what Nature attempted was often spoiled by goats, the cheapest and costliest of domestic cattle, that keep themselves and ruin climate and agriculture.

Even in Homer we begin to see the ruin of the forests. Mr. Grainger with his steam-engines is not there ; but a simile (Iliad 17, 742) shows us mules, putting their full strength to it, as down a rocky mountain trail they haul a beam or, it may be, the keel of a ship, and their soul is broken within them, straining with toil and sweat. A torrent,• in another simile, sweeps away oak and fir, down to the plain and the sea—happy (one thinks) if they did reach the sea and did not block the rivers and make worse desolation. Homer has also seen a forest fire—or perhaps it is a fire where forest once was, as so often in the New World (Iliad 17, 155) ; but it is not in his simile on the awful scale of the New World. Let me recall the Canadian postmark cancelling stamps with " Help prevent forest fires," and the card of appeal hung in trains, urging you in French and English to be careful with the stump of your cigarette.

The upshot was what you might expect. Timber for house-building or ship-building had to be fetched overseas. King Ptolemy in Egypt is directly interested in the forests of Lebanon and of Cyprus ; the Athenian general has lumber sent him from Macedon ; the- yacht of Catullus is of timbers from " Pontic Amastris and box- crowned Cytorus." Theophrastus in his book On Plants (you had better read . it in the Loeb volumes, as I do) has plenty to tell of trees as well as vegetables-,--of building timber in Arcadia, in Cyprus, in Macedon ; of the silver fir, and how it " gives timber of the greatest length and the straightest growth," for yard-arms and masts ; of oak and its freedom from worm ; and of the significance of wood without knots, "smooth and fairest" in appearance. Here remember the firs of British Columbia—forty, feet without a knot ; and look at the deck of the next liner . you embark on, and sec whether you can find knots in it, and ask where they got the wood.

The forest is felled ; and then fire burns off the after- growth and the humus—the leaf mould ; and other things follow. First a remarkable combination of drought and flood. Forest holds snow and rain, shelters the moisture from the sun, and releases it gradually, keeping an equable temperature. Cut away your forest, and down sweeps the rain off the hills, in spate ; and look out for your farms below, beasts and grain. Later on the summer burns all, and the hills have nothing to give you. After that, the soil is washed off the hills, some- times over your farms again, and constantly into the rivers ; and thence follow blocking of currents, stoppage of navigation, floods, changes of bed, desolation, and uncertainty. The Mississippi, the Yellow River (" China's Sorrow ") the Po, tell you what blocked rivers on alluvial plains can do. Denuded Southern France is nearer still. Climate, of course, changes with the disappearance of forest.

I wish very much that our English historians would tell us a little more of the face of England. The late Mr. Mackenzie, of the Cambridge School of Agriculture, used to lament that they said nothing of the eighteenth century and the change in the whole aspect of England made by the hedges, which turnips and enclosures had demanded. Here, I think, is another gap in our history, ancient and modem, and all sorts of issues axe involved.